Hot Rod tumbles through time and space to various points in the history and possible futures of the Transformers- but why has Primus brought him here, and what is he supposed to take away from Zero Space? "Less Than Zero" is written by Simon Furman with art by Casey Coller, Geoff Senior, Jeff Anderson, Nick Roche, Stephen Baskerville, John-Paul Bove, and welcoming back to the Transformers G1 Marvel artist Jose Delbo! 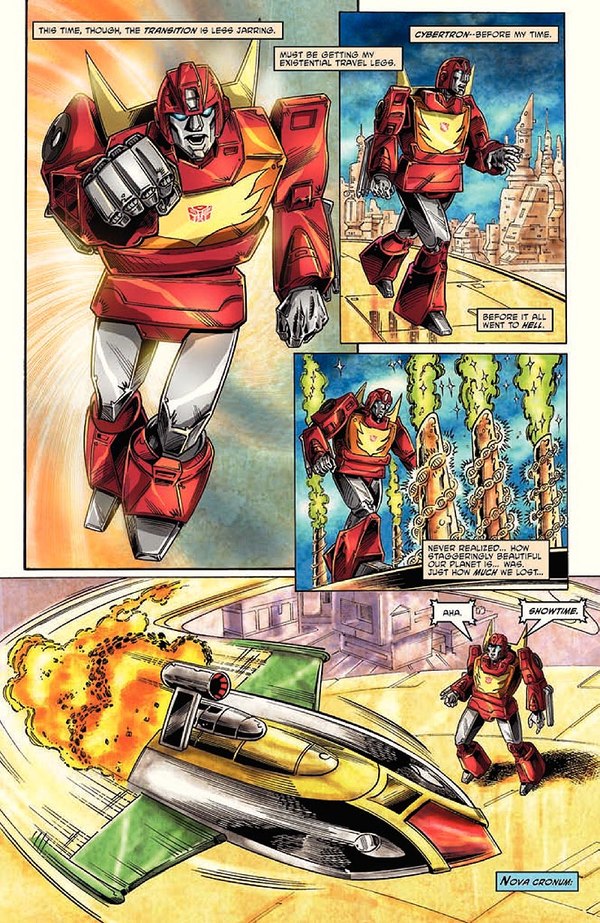 Most of the UK comics were colored in this style. Bravo to John-Paul Bove for recreating this and many other looks!

Hot Rod falls out of Zero Space into the middle of "Deathbringer" and witnesses the Autobots' encounter with the entity that accidentally taught the Matrix how to like hurting people. Witnessing that not all of the evil in the Matrix had been purged, he's whisked away to ancient Cybertron, where Jhiaxus steals the secrets of the Underbase from Boltax and erases himself from the annals of Cybertronian history to make his expansionist dreams a reality in secret. Next, he watches the Decepticon Zombie Apocalypse on Earth, where Buster and Jessie Witwicky meet their doom in a car wash because his brother Spike doesn't want to put on a hat. (Specifically, the helmet that lets him control Fortress Maximus.) Lastly Hot Rod goes someplace else, someplace unlike any part of his timeline that he knows, and sees... himself?

Now we're getting somewhere. The issue doesn't explain everything- I'm sure we'll be spending the rest of Regeneration One's run showing exactly what's going on -but new information is given and new developments hinted at as opposed to a parade of recycled Decepticon threats. Some of the pieces of the puzzle- the residual darkness of the Matrix forming a type of "Anti-Matrix" and Jhiaxus' use of the Underbase's knowledge to push his dreams of empire -point to the possibility of a G2 Redux, which has long been one of my suspicions for how ReGen One would play out, or at least a stop it would make on the way to its intent of a definitive ending. How Spike fits into all of this remains to be seen though Furman has long hinted that he would be pivotal to the outcome of the story. The last stop is the biggest puzzler as to its significance and message to Hot Rod, but it's definitely not any place in the normal Marvel timeline. What Hot Rod takes away from it is significant, but whether or not it's what he's supposed to take away from it is the big question.

Artwise, this is the best issue of Regeneration One to date. Part of that is because of the massive amount of talented artists brought to bear on this issue, and part of it is due to those artists not being constrained by what Andrew Wildman's art style looked like in 1989. It's a pleasure to see Geoff Senior do some new sequential work on Transformers, revisiting a UK story he drew half of shortly before Simon Furman took over the US book- one that laid the groundwork for the Matrix Quest storyline. (Amusingly, most of the story recreated here is from the half of the story that Senior didn't draw.) The Underbase chapter is drawn by UK artist Jeff Anderson, whose style is similar to Andrew Wildman's but his faces are less rounded, less clearly humans painted silver. His style has gotten cleaner in the 20-some years since the last TF comic I'd read by him- always a pleasure to be able to see an artist improve. Along those lines, Jose Delbo does some fine, solid work on the End of the World, ranging from the destruction wrought by the Zombie Decepticons to the quiet despair of Mopey Spike. Nick Roche is emulating something a bit more spoilery, and does a pretty good job of working in that style, though his artwork is cleaner and more detailed than the style he's working from. Also, there's simply no hiding how he approaches facial expressions, which compared to the source material is fine by me.

Lastly, credit has to be given to John-Paul Bove for going above and beyond in his coloring this month. Finally, in the Senior and Delbo chapters, he gives us the Marvel-style coloring I've wanted to see on this book from issue one. ...er, eighty-one. To top that, he emulates the UK comics' watercolor style equally well in Jeff Anderson's segment, and then aces a completely different style in the Roche chapter. While Bove's colors have been too modern for my tastes on the rest of the book it's clear that this is by editorial fiat; he's perfectly capable of working in any style they hand him, and he contributes greatly to the charm and enjoyment of reading this issue.

I wish this issue had fallen earlier in the run, because it's the best we've gotten so far. Which is interesting, because it's as much things being hinted at as much of the rest of the book has been. But visually it's a spectacular book, and the things being hinted at are a little less obvious and a little more off in the distance, which helps. This book is a lot of fun and has me interested in seeing where ReGeneration One is going again, and hopefully Simon Furman will take this shot-in-the-arm and run with it.