The Omega Lock has been fired into the Well of All Sparks, and Cybertron is reborn... but of course, Cybertron is not uninhabited. Will those left behind on the planet survive, or will the new genesis of Cybertron destroy such life in favor of its new matrix? Transformers Prime: Beast Hunters #5 is written by Mike Johnson from a story by Johnson and Mairghread Scott, with art by Agustin Padilla, inks by Jose Aviles, colors by Patricia Tramontano, Josh Burcham and Josh Perez, with lettering by Tom B. Long. 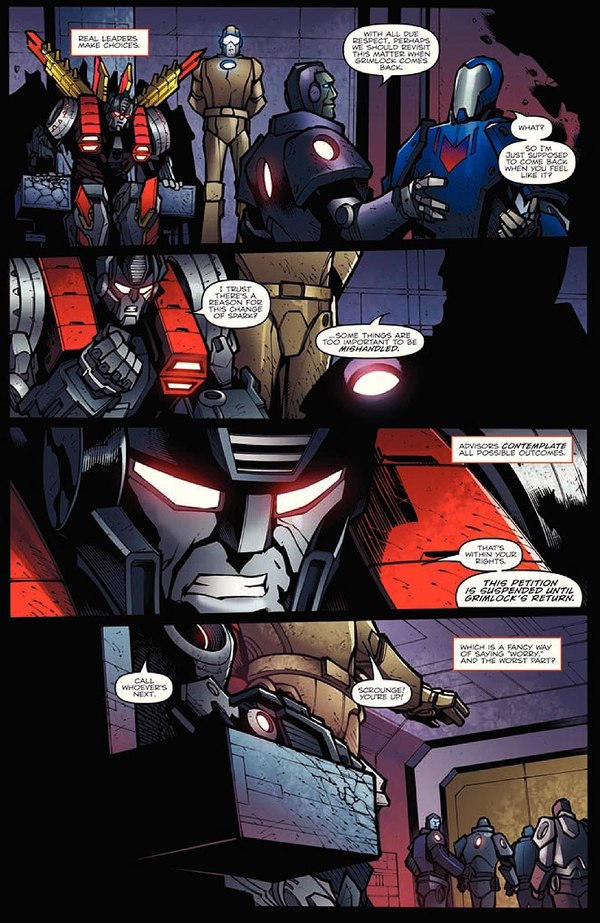 Snarl gets all the fun assignmen- wait, is that Cobra Commander?

Snarl is alone in the Dinobots' home, standing in as arbiter, while Grimlock and Swoop visit New Kalis and Slug and Sludge are out hunting Energon. Then the Omega Lock begins its work of cyberforming- some of those who survive feel refreshed and repaired, but all are faced with the prospect of finding their way through the completely changed underground. Slug and Snarl happen across a trapped Forged who claims to be the last survivor of his settlement, and Slug has to decide whether or not he can be trusted. Grimlock and Swoop, along with Chromia from New Kalis, encounter a huge and growing pool of Energon, and have to tend to those so desperate to recharge that they're not looking out for their own safety. And Snarl, when he digs out, has to see to the survival of the home base...

Now the comic begins to reflect current events in the Beast Hunters TV show, right at the end of the last episode. Naturally the reformatting of Cybertron is going to mean some changes, especially deep underground, close to the planet's core. This issue deals with the immediate consequences of that, particularly Snarl's thoughts on the situation as stand-in leader and compulsive worrier which form our narrative thread through all three locations. I'm hoping next issue or the final two issues will begin to delve into the longterm implications of the changes to Cybertron... such as the Autobots' return. Grimlock and company have history with Ultra Magnus, just for one, and I'm wondering how he and all the refugees are going to react to seeing Optimus Prime and company after so long.

The art is fairly solid in this issue, or at least better than some of the earlier issues- while Jose Aviles continues to mitigate Padilla's tics as an artist, they're still there. But Padilla seems to be settling in and having some fun with the part, taking the opportunity to do a bit more with his "generics" than in previous issues. While most refugees continue to look more or less than Iron Man's Mark I armor, there are some fun exceptions, such as the one petitioner before Snarl who seems to be Cobra Commander. We get a few more defined characters as well such as Chromia- part of Mairghread Scott's continuing (and appreciated) drive to bring more active female Transformers into the Beast Hunters story. Chromia's robot mode is never shown in clear closeup, but she's definitely derived from Arcee though her alt-mode is completely different. We also get a long-promised cameo from Scrounge of "The Smelting Pool!" fame. The trapped Forged is interesting as well, being definitely not a generic and almost G1-like in his overall (boxy) shape. Hopefully we'll get a better look at both him and Chromia next issue.

I have to say, I'm wishing IDW had handled Beast Hunters a bit differently. The Ken Christiansen covers are attractive but not at all descriptive of the content of the book, and repeatedly dumping a very new book set in a different continuity on the same week as their big two Transformers comics, More Than Meets The Eye and Robots In Disguise, probably didn't help it much. But this is a very good comic, one that I'm looking forward to the next issue of, and I want to see how the Dinobots fit into the new Cybertron. It's just a shame we have so few issues left to find out.