The Transformers: Robots In Disguise #21 - Generation One - IDW Comic Book

Soundwave has always been leery of Shockwave and his lack of emotional attachment to Megatron's cause. Now that he has deserted the Decepticons in their time of need, it's time to finish things. "Shockpoint" is written by John Barber with art by Andrew Griffith and Livio Ramondelli, colors by Priscilla Tramontano and Ramondelli, and lettering by Shawn Lee. 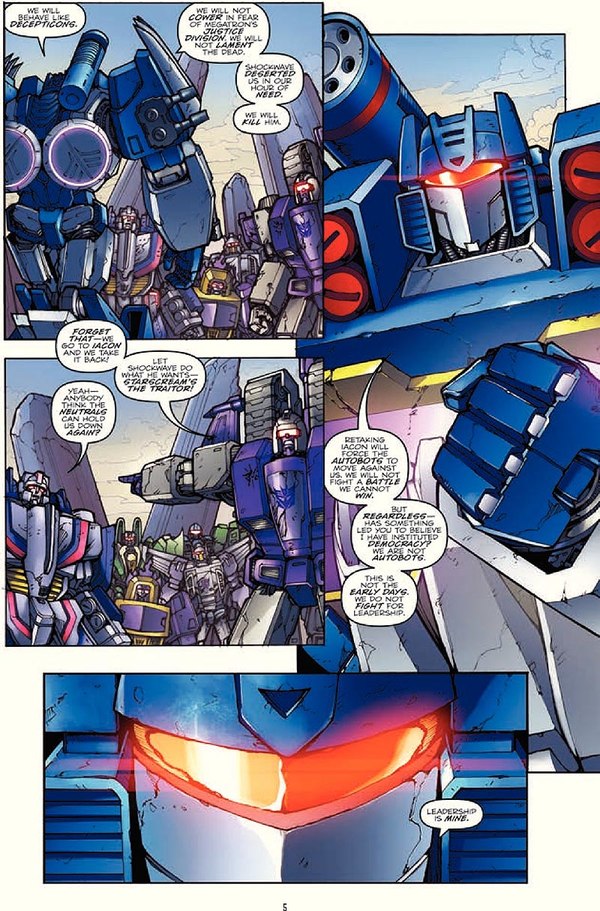 Finally, the second- third- fourth-in-command gets his time to shine! (Or not.)

Soundwave recalls the surrender to the Autobots, and how Shockwave broke the news that Megatron had survived. Soundwave suffers from a synesthesia-like ability to sense emotions in various ways... and thus Shockwave, the "perfect Cybertronian," is invisible to him. But in scheming with Jhiaxus, Shockwave has betrayed the Decepticon cause, and so Shockwave has to die. The rest of the Decepticons are having none of it, some unwilling to follow Soundwave and some simply tired of the destruction the war has wrought. Soundwave recalls his time as part of Galvatron's amalgamation of every Decepticon in existence... save two. Megatron who destroyed the monster, and Shockwave who merely watched and planned. Shockwave has been planning for a long time, and Soundwave has yet to discover exactly what the plan- Regenesis -is. Soundwave tracks Shockwave and Dreadwing to Crystal City, and faces off against Dreadwing, alone...

This issue helps bring Soundwave into focus, and if it weren't half of a two-parter it could easily serve as a Spotlight issue. Although, Soundwave already had a Spotlight all the way back in 2007, which this issue even calls back to. The long and bitter rivalry between Soundwave and Shockwave is on display here, and their encounters generally result in bouts of one-upmanship. But the focus here on Soundwave's perceptions is what provides the most interesting thread; the new spins on previous events seem to be fairly minor so far, though there is a small seed of mistrust for Megatron that Shockwave is trying to bring out in Soundwave. Whether he sides with Shockwave and Jhiaxus or remains loyal to Megatron- or his idealized concept of Megatron -remains to be seen until next issue.

Art is split between Andrew Griffith's present and Livio Ramondelli's past. Ramondelli gets some visuals that go very well with his style in some parts of this issue, in fact revisiting parts of the IDW storyline that he was the original artist on in one case. Griffith's material on the other hand consists of quarrels among the Decepticons and a fight between Soundwave and Dreadwing. But the consistency and composition of Griffith's work is much more pleasing to my eye than Ramondelli's. Griffith isn't my favorite TF artist- as I've said before, I don't mean that as a putdown so much as a testament to the current strength of the field, because he's excellent -but putting him in the same book as Livio Ramondelli really highlights the issues I have with the latter's art. Much like the rivalry between Soundwave and Shockwave they are opposites- but I'll let you decide which is which.

We're creeping up on Dark Cybertron here, as we have been for the past few months; it's beginning to feel like John Barber's stuck in a holding pattern while James Roberts finishes up "Remain In Light" over in More Than Meets The Eye. But even if that's not the reason for these character study issues of the last few months we've only got one more prelude issue to go, and by the time October is over we should know whose side Soundwave is really on.