The Transformers: More Than Meets The Eye 21 - Generation One - IDW Comic Book

Remain In Light concludes! What will be the outcome of Tyrest's unhinged ambitions? Who will survive to face the consequences? And just how many disturbing close up panels of Pharma can we get? Story by James Roberts, with art by Alex Milne and coloring by Josh Burcham with Joana Lafuente.

Every cold-constructed Transformer anywhere is slowly having their spark unmade so as to alleviate Tyrest's feelings of guilt over helping spawn what he considers a damaged subspecies. Cyclonus, Whirl, and the still-surviving members of the Circle of Light fight an unwinnable battle against Star Saber and a numerically overpowering force of Legislators, and Rodimus and his fellow escapees are pinned to the floor by the power of suggestion. How can the day possibly be saved? 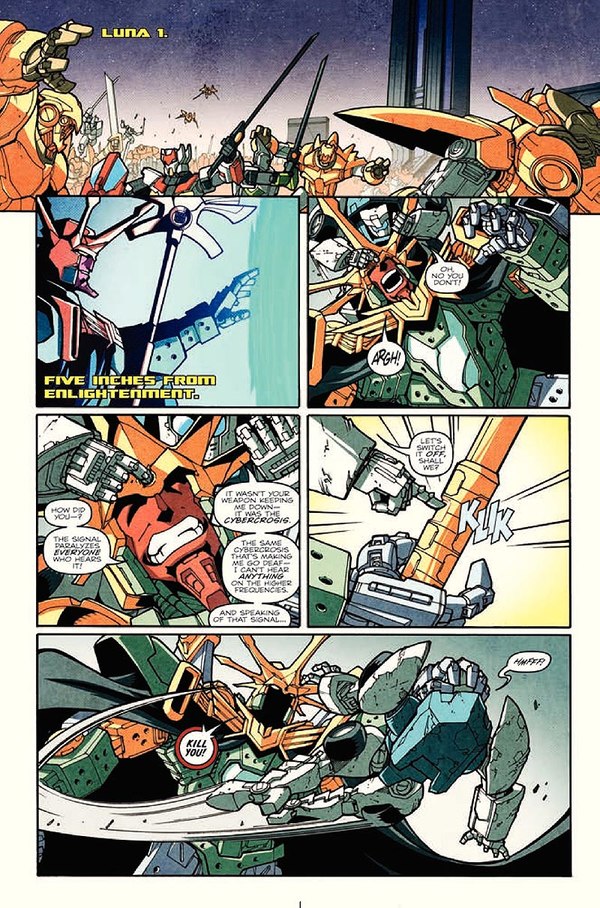 Well, I'm not going to tell you, that's for sure. To talk very much about the issue carries a risk of spoilers beyond what I'm comfortable with because after four issues of building up the situations, just about every page of this issue has elements of those resolutions. Some things are foregone conclusions, like that the killswitch can be defeated. If not, we'd lose around half the cast in both this and Robots in Disguise, and that'd probably be damaging to the overall narrative. But aside from that, you have characters experiencing close encounters, revealing dark secrets, baring their innermost selves, and becoming mad as hell and they're not going to take it anymore. It's a full issue, no doubt, and all while wrapping this storyline it lays out some new things to be developed after the Dark Cybertron crossover. The thing is, while there is a lot going on here, it all seems to go by really fast. The last couple months of this I particularly noticed that reading and really absorbing the content of the issues took a little while. A lot of information was conveyed between text and art in a short span of pages in a very satisfying, meaty kind of way. Reading it was like a thick cut of beautifully cooked steak. It was substantial and to extend the metaphor, you felt full after it was all done. I found with each reading of 21 that it took only a short time to get through the main story, and it's left me feeling a bit ...wanting. I imagine it can partly be due to having four months of buildup bringing us here and having a tall order to fill in capping that off. It's nothing I feel is indicating a lesser quality of the writing or art, but I think it's a failing in having separate, complex storylines needing to more or less fully wrap in one shot. I had suggested earlier in this story arc that it would certainly be a fantastic read in a collected volume, but this issue is the one out of the five that feels the most like it actively needs the TPB. James Roberts himself likened Remain In Light to a movie, and it's pretty appropriate. Reading 21 by itself is very similar to watching just the last 15 minutes of a movie. Even if you've seen all the rest leading up to the climax previously, it still just doesn't work quite the same in isolation.

Included in this issue is the text story The Sound of Breaking Glass. In contrast to the main part of issue 21, this four pages of text is a very satisfying read all on its own. Taking place mainly between pages, it adds a few extra scenes to the aftermath and covers a couple of status changes that will be reflected in subsequent issues. It also carries some hints to certain events that might have taken place off panel between the end of issue 20 and the opening of 21. Unfortunately, those mysteries will still have to wait until another time to be more fully explored. The story is written well, though the copy reviewed had a few typographical errors that may be slightly distracting. The text medium is utilized well, describing situations that would be difficult to depict adequately as comic pages without potentially taking up a lot of extra space. Not that I wouldn't love some visualization of some of these scenes, but it's enough to have a few extra pages of More Than Meets The Eye story for a given month.

It didn't strike me until just today how long this conclusion has been in coming, either. If you look to the direct cause of travel to Luna 1, this runs back to issue 14 with Overlord being set loose where he was able to mortally injure Ultra Magnus. It doesn't seem like a lot looking backward to realize this has been an eight issue process, and while the wait between issues tended to feel completely interminable, that is not itself the point. No, it struck me finally that thanks to the death clock on Tailgate, it's put right before us that only three or perhaps four days at most pass in-universe for what takes us almost eight months to finally reach the end of. And it's not like decompressed storytelling where everyone is killing time until something happens. Everybody was busy the whole time, so much that it's not until the end that you finally notice how much has happened practically all at once. It's easy to forget reading month to month that from the perspective of the characters there hasn't even been time to recover from Overlord's murderous rampage before getting involved in all of this mess. And I just sit here trying to look at it in context and all I'm thinking is, 'these people need a vacation.'