The Transformers: More Than Meets The Eye #22 - Generation One - IDW Comic Book

It's the inside story! More Than Meets The Eye 22 presents "Little Victories", a film by Rewind showing the everyday shipboard life of an epic quest. Story by James Roberts, art by James Raiz, with colors by Josh Burcham. 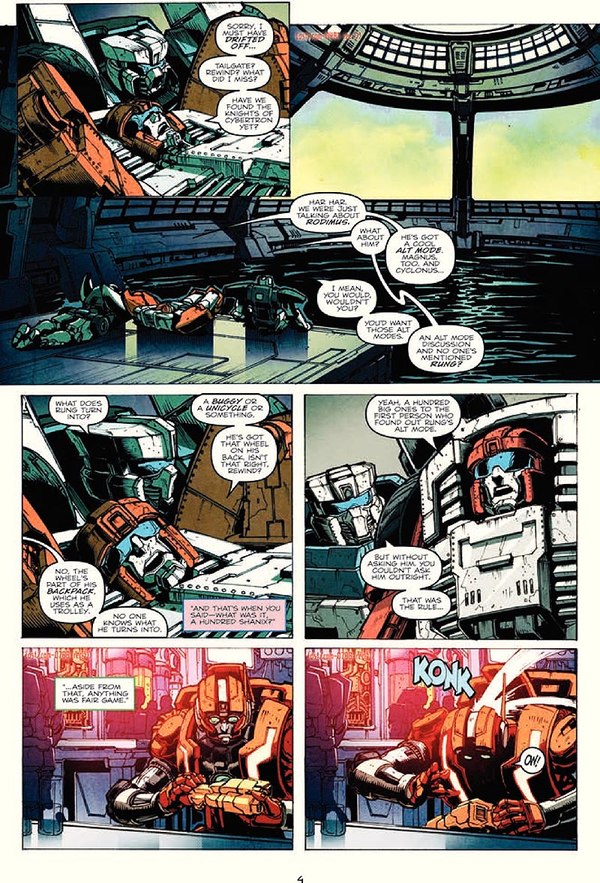 The story is presented as scenes from Rewind's documentary about the Lost Light's quest to find the Knights of Cybertron, featuring things like Swerve trying to uncover the secret of Rung's alternate mode, meeting another species of mechanoids, and a visit from legendary Autobot hero Thunderclash. A lot of the pages are taken up in a "talking heads" form, with many small panels focused on individual characters being interviewed. It opens the way to get information out that would probably be difficult to fit naturally in another context, plus allows for a "missing scene" of the visit to Hedonia to be shown, along with other mini-episodes that would probably never make it in to a standard issue's story. It's an entertaining read and the story is presented well even with the unusual format.

But where we have a solid story in Lost Light: The Movie, the art makes it difficult or impossible to really sink in to the situation. James Raiz is on art this month, and he has his particular style with the robots. And the style is where I'm getting stopped. He doesn't seem to have a problem drawing characters to model, he seems to have a problem knowing where to stop. The character models feel like they're treated as rough outlines, whereupon he grabs a trowel and sets to walling them over with superfluous detailing. And where the detailing can't be maximized, heavy shadowing is substituted. The inking style makes everything look cluttered and muddy. It doesn't end simply at a loss of visual appeal, the way he renders the characters makes even the most unthreatening among the cast look poised to eat your soul. There's no way to feel sympathy with any character shown because they're all drawn looking harsh, cold, and dangerous. No one has distinct personality because it's all caked over with a thick-inked detail-sludge.

I've been reflecting on this a bit, and decided that of the few guest artists MTMTE has had in its run so far, all of them have tried as best they could to emulate the appearance of Alex Milne's art. They don't all succeed brilliantly, but it's the effort behind it that I'm focused on. There is at least the intent of keeping as much visual consistency as possible. If Raiz has tried to do this, I can see no sign of it. This issue clashes so much with the appearance of every preceding issue that it doesn't even look like it belongs to the same title. That's probably the biggest crime here, because the specific visual style is a big aspect of what this book is, as much as the writing. It's very much the same thing as hearing Kevin Conroy's Batman voice coming out of a Batman not drawn in the Bruce Timm style. It's wrong and always will be because the character is the appearance as much as it is the voice.

James Roberts has noted that this is our final chance to have a story with all of the book's original cast before "season two" after the Dark Cybertron event, which may not focus on all the same characters. Of course this is also a last chance since not everyone featured here is still alive or with the ship anymore either. I find some of the weight subverted though by the art. Things like the cast group shot on the final page that would have been really cool with Milne drawing it just become reminders of how poorly the art fit through the entire issue. So a nice thing to send off the first season before moving to Dark Cybertron ends up acting only to mock the reader instead. And now with this brief rest done, we now join another months-long event storyline! I really hope once Dark Cybertron is wrapped up, we can go for a while on just some fun one or two issue long stories. The long game is starting to turn in to a drag.