The Transformers: Robots in Disguise 22 - Generation One - IDW Comic Book

A game of death and suffering, plus a history of Soundwave! All to be found in the pages of Robots in Disguise 22, written by John Barber, with present-day art by Andrew Griffith, past art and colors by Livio Ramondelli, and present-day colors by Priscilla Tramontano.

Soundwave and Shockwave engage in a battle neither can win. Soundwave seeks to halt Shockwave's machinations as millions of years of hatred and distrust come to a head. Meanwhile in the past, Soundwave's development from the fall of the senate back to his first encounter with Ravage, Buzzsaw and Laserbeak is revealed. 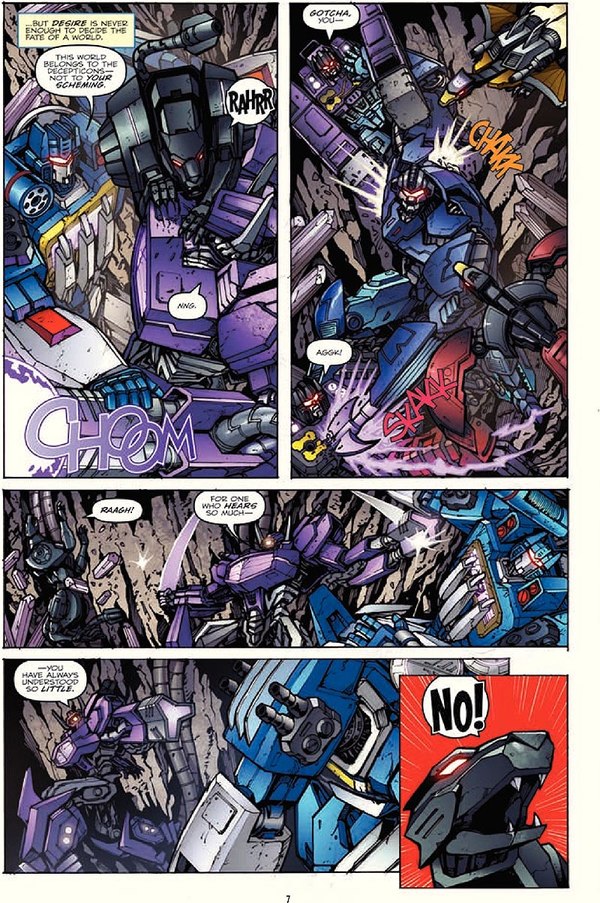 Check out our fantastic Shockwave wall-relief!

Light summary this month, but in all honesty the story is stretched a little thin to start. There's two pushes with this issue, one being to finally open the door and move us in to Dark Cybertron #1 that is scheduled to ship next week. But the more significant element is developing Soundwave's past. We're given this in reverse order, starting from the immediate aftermath of the Decepticon massacre of the senate to a time before Soundwave had a faceplate. The interactions of Soundwave and Shockwave in the past are largely retreading ground covered last month, where Soundwave despises Shockwave because he no longer has any emotions to read. Seemingly the whole idea being that Soundwave uses that ability to have control of any situation and can't tolerate it when someone is blocking him, even involuntarily. To be honest I'm not entirely sure how we're supposed to take this. Between the past and present parts of the story Soundwave is played as being the patriot and at least in his own view an ideal Decepticon who cares about the well being of Cybertron above all, and that makes it feel like he's supposed to be taken as at least sympathetic if not heroic in his stand against Shockwave. But the way his enmity with Shockwave is explained it undermines the image, and makes him look weak and insecure. Maybe that is part of the intent, but the portrayals clash for me.

Meanwhile, as I noted, the story feels stretched out. There's very, very little substance to the present-day portion until right at the end where we finally catch up to where the earlier character study issues of RID left off, with the mysterious false sunrise dawning. This story is told in two parts that I feel like could have been a far stronger presentation if carefully combined down to a single issue's space that more fully emphasized the past, only using the fight in the present as a means of framing to jump between some of the time periods. The whole exercise makes me feel bad because I'm all too aware that the unified event storyline required both this book and More Than Meets The Eye to be ready to go at the same time, and I can't help but see these past two issues as having to knowingly present a story that falls short of what I've come to expect from this writer. It's not his fault that a certain amount of time had to be filled while MTMTE wrapped its business up, but I can't easily handwave the way the time got filled in.

Another thing I'm wanting to attribute to being right on the edge of kicking off Dark Cybertron is a bit poorer level of art than I'm accustomed to here. Griffith's linework is still impressively precise and detailed, but the fight scenes were coming off awkwardly. It was hard to get any sense of depth in the panels. There are places where Shockwave appears to be embedded part way in a rock wall, for instance, because nothing's working to show delineation of foreground and background. I think that responsibility for this is on both Andrew Griffith and Priscilla Tramontano. What inking doesn't do in terms of shading or distinguishing perspective, coloring ought to catch and handle. But most everything in the present seemed like there was an ever-present omnidirectional light leaving virtually nothing in shadow. If it was an intentional contrast to Ramondelli's pages, it went too far. While I don't always care for the way he renders characters, Ramondelli is always strong at structuring and lighting a scene. He has a genuine talent for immersive environments, and it makes the two art styles in this issue stand so far apart from each other.