When Cybertron was rendered uninhabitable, Grimlock, the Dinobots and refugees retreated underground. Now, as the planet is reborn, they fight their way to the surface. Would Cybertron please just make up its mind? Transformers Prime: Beast Hunters #6 is written by Mairghread Scott from a story by Scott and Mike Johnson, with art by Agustin Padilla and Atilio Rojo, colors by Patricia Tramontano, and lettering by Tom B. Long. 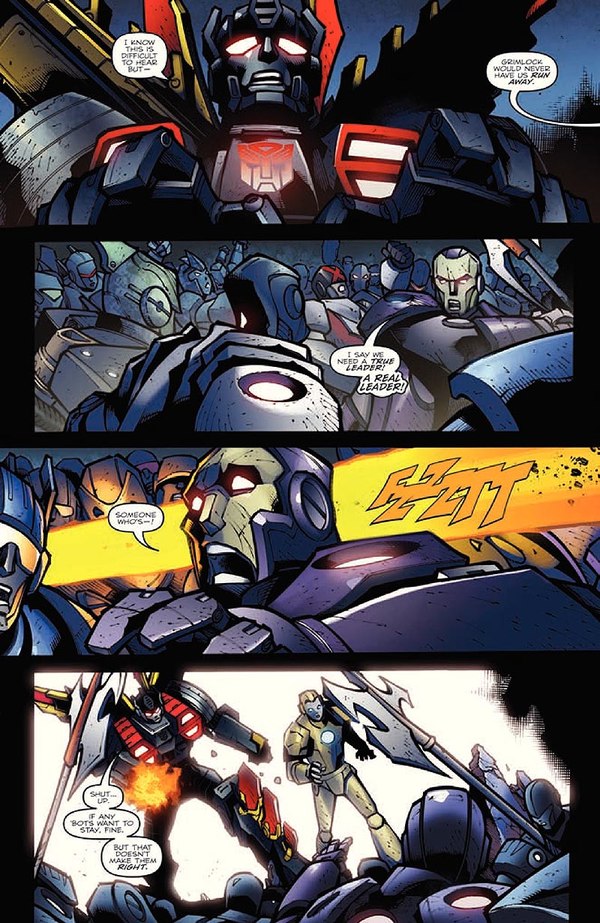 Not only is Cobra Commander Bot back in the backgrounds, but he's joined by `70s Iron Man and Cyclops in his current costume. Nice!

Snarl, as acting ruler in Grimlock's city, is convinced that the quake was a symptom of a planet-wide event. Elsewhere, Slug and Sludge tend to Blackout, Slug's Forged prisoner, who needs medical attention before they return to Last Spark. Elsewhere still, Grimlock and Swoop continue to lead the people of New Kalis towards the surface. The groups all run into different troubles: Snarl has to assert his leadership when some random jerk decides to question it. Slug and Sludge have to deal with the new landscape and how to transport Blackout across it. Grimlock and Swoop realize that the tunnel they've been following is a little too neat to be natural- and whatever dug it must be pretty big.

Snarl's narrative continues throughout, and at this point in the series we've gotten a look at all the Dinobots and what makes them tick. That's a pretty solid accomplishment in and of itself, considering most other depictions of Dinobots end up focusing on Grimlock almost exclusively. Snarl in particular as the group strategist/adviser is a characterization that could have legs- I hope so, anyway, because what other take on Snarl is there? The conversations between Blackout and Slug are also a high point, and a few brief references to the political situation leading up to the war remind me that the Aligned continuity and IDW's main comics were really thinking along similar lines for a long time there. They're definitely separate universes, but there continue to be overlaps in the approach to the Transformers' world like this. It's nice to be reminded of the greater Aligned world and get some more minor details filled in; I just wish we had more time left for that.

What muddies things is how the main characters have been separated. Splitting a narrative three ways is an extremely tricky prospect. You're dividing the writer's attention and the audience's, and it takes a carefully coordinated effort by all parties to keep all the balls in the air. It helps to be married to an Oscar-winning film editor, for one. One more easily-achieved thing that can help is if the three threads are all distinctive. Just for randomly-chosen example, a battle in space, the interior of a space station, and a ground battle in a forest. You can tell at a glance which scenes belong where and what's going on. This issue, it is somewhat tricky at times to differentiate immediately which gray, red and gold robot is leading which group of generic robots through which brown tunnels. There are points in the book where the difference is more prominent- near the end Snarl is in a dark blue area, Slug and Sludge are in a pale blue area, and Grimlock's with Swoop in the brown tunnels. But this would've been better served as being a constant throughout the book.

Another lost opportunity for clarification here is the addition of inker Atilio Rojo to the book, filling in for Jose Aviles. Rojo's style is pretty distinct from Agustin Padilla's on this book: Rojo's pages are the ones with thinner, more even lines, less use of heavy and jagged shadows, and little to no ink spatter in the backgrounds. It's a solid style, though it does have a touch of the Manny Galan effect on Padilla's work; he's another artist who benefits from an elaborately gritty finish to fill in the gaps in the lineart. Luckily Padilla's art isn't as soft as Galan's, so you don't have that G2 marshmallowy thing going on. But more to the point, Rojo's inking isn't restricted to specific parts of the book, which could've helped differentiate one of our story threads more thoroughly. It seems more like he was brought in heavily near the end to help Padilla meet his deadlines.

But to his credit, Padilla is clearly having some fun here. Our Cobra Commander cameo from last issue has returned, and is joined by a `70s-armor Iron Man, and a bot clearly based on X-Man Cyclops' current X-shaped visor. Also a Hellboy! I much prefer this approach to background characters to his more generic fill-in bots, and just like with Spotlight: Trailcutter's Insecticon version of Kamen Rider V3, it gives the citizens of the Cybertron underground a certain life that they really needed.

I think the cancellation of the book may be showing a bit here, because this issue tries to juggle a lot of story threads at once. It does pretty well on the script end but presentation could've streamlined the story and made it easier to follow. Also, the end of the story isn't as conclusive a stop as our previous 2-issue arcs. This is Mairghread Scott's last time scripting Beast Hunters, and I really hope it's not her last Transformers script ever. But we have two issues left written by Mike Johnson, and we're heading up towards the time of Predacons Rising. It's a new Cybertron, and I'm curious to see how it treats the Dinobots and their Morlock-bot charges.