Everything starts here as Shockwave's pieces move in to place, the players begin to assemble, and storylines collide! Dark Cybertron begins with Chapter One. Story by James Roberts and John Barber, layouts by Phil Jimenez and finished art by Andrew Griffith with colors by Josh Perez, and prologue art by Brendan Cahill, colored by John-Paul Bove.

Shockwave's plans begin as the Metrotitan from Gorlam Prime arrives and begins a reaction with the resurrection ore, causing a light visible to all of Cybertron's inhabitants. Starscream finally realizes it isn't the sunrise, and seeks specialist help after analyzing the spectrum of the light. Meanwhile far away, Orion and his crew struggle to escape the increasing gravity well of Gorlam Prime as it appears to fall in to the Dead Universe. Their small ship's engines can't overcome the pull, but a very timely Lost Light comes to their aid. And in Cybertron's wilderness, Bumblebee's exiled Autobots stand ready to confront the source of the false sunrise, but are completely unprepared for the scale of the threat. 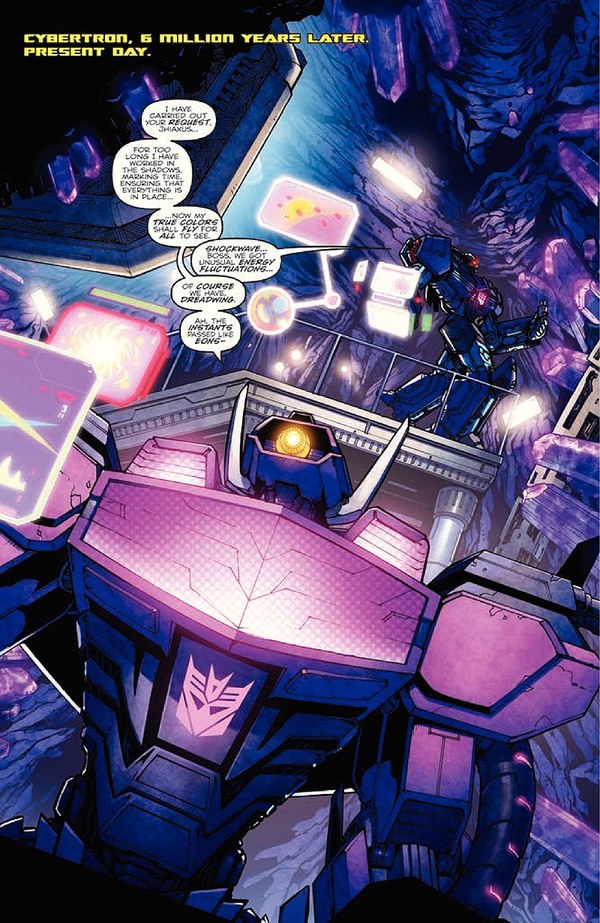 There's a cooler two-page splash, but it didn't fall in the preview range. This page is my second favorite, though.

With a lengthy crossover at hand, we're starting with a special issue to begin to get the pieces and players either in position or in motion for the story. So with that you can understand a lot of different things have to come together in the space of these pages, and more than anything else what I think is... it wasn't enough. Pages, that is. See, we visit Starscream, the Autobot exiles, Orion, Shockwave, and the Lost Light, all in the standard page count. Since Robots in Disguise has the most separate and relevant elements to tie together, its portions get the most attention and the Lost Light scenes are almost entirely used in combination with Orion's. That's not necessarily a critical note; after all, More Than Meets The Eye has had basically nothing to do with the events building up to Dark Cybertron at all. There's a lot of ground to cover here so we don't have to spend time in the next ongoing series issue in a couple of weeks doing this set up, and confining it to the normal issue size is working against it. The various scenes feel really abbreviated and hurried along to make sure everything's getting done, and it hurts the flow of the story. There's no time to get any depth to each situation, and the quick jumps from place to place become a little jarring. As a comic title, Dark Cybertron is supposed to have two issues, bookending the crossover. I'd have liked to see that used to do extra-length issues and give the task of coordinating two books' cast and content the space it really needs to work. Ultimately, it feels like every scene not to do directly with Shockwave, or the opening prologue of the book could be thrown out and it would probably help the story structure within the issue. These are really the only events shown that feel at all like they're important to what's going on.

We have some complex art credits this month, and that side of things is pretty fun. The layouts for the pages were done by Phil Jimenez, and then finished by Andrew Griffith for most pages. So the scenes have a little more unique quality to them in how they're composed, while keeping consistent character appearances for all the RID cast present. The prologue for the issue was drawn by Brendan Cahill so everything has a little bit different look, which works well for a scene in the distant past. Plus I've been wanting to see Cahill do more interior work, so it's a win all around. The colors for this portion are done by John-Paul Bove, using a slightly more retro coloring style that I dig. Between the art and the coloring style, it feels like they were trying to evoke Guido's retro art used in the Robots in Disguise and More Than Meets The Eyeannuals last year, and I'm very okay with that. The appearances of the More Than Meets The Eye cast are just that little bit off to catch notice, particularly in the faces which Milne renders in a really specific way that nobody else seems to be able to really match, but MTMTE has had fill-in artists that were a lot farther off, so it's nothing jarring overall. Something I found interesting is Josh Perez's colors. All the scenes around Cybertron and aboard Pax's ship are the normal style Perez has used in RID, but once we go to scenes aboard the Lost Light, while the characters are still in a brighter color range than Josh Burcham uses, the coloring of the environment looks like it's trying to match MTMTE much more. It's a really small detail but it makes quite a difference in the way the location reads even while the people within that space look different from how they normally do. It's a contrast to the Cybertron scenes in another way, too: On Cybertron everything's at least a little bit dirty, even indoors in Iacon. There's just that bit of grunge to show that everything's a little messed up while they're trying to piece the civilization back together, and that's saying nothing about the caves and wild plains. But Lost Light has its sterile quality kept intact, and in a case where both settings are being depicted in one book, that distinction is something really important to maintain.

My hope going forward from here is to have the individual issues of the ongoing titles be a little more self-focused rather than both books trying to be everything all the time like this was. If the story structure weakness present in this issue is merely a symptom of needing to tie all the ends together I can move beyond that. If it becomes a running trend of the entire crossover, I'm going to become rather more annoyed at the handling of this storyline. Still, let's go with best expectations and trust that when we return to this a little later this month that we'll be properly presented with the creative strengths we expect of the involved titles!