On the surface of Cybertron, the planet is reborn... so there's nothing better than for both sides of the war to pick up where they left off, right? The Forged sure think so, and the Dinobots and their charges are forced to agree. Transformers Prime: Beast Hunters #7 is written by Mike Johnson from a story by Johnson and Mairghread Scott, with art by Agustin Padilla, colors by Priscilla Tramontano, and lettering by Tom B. Long. 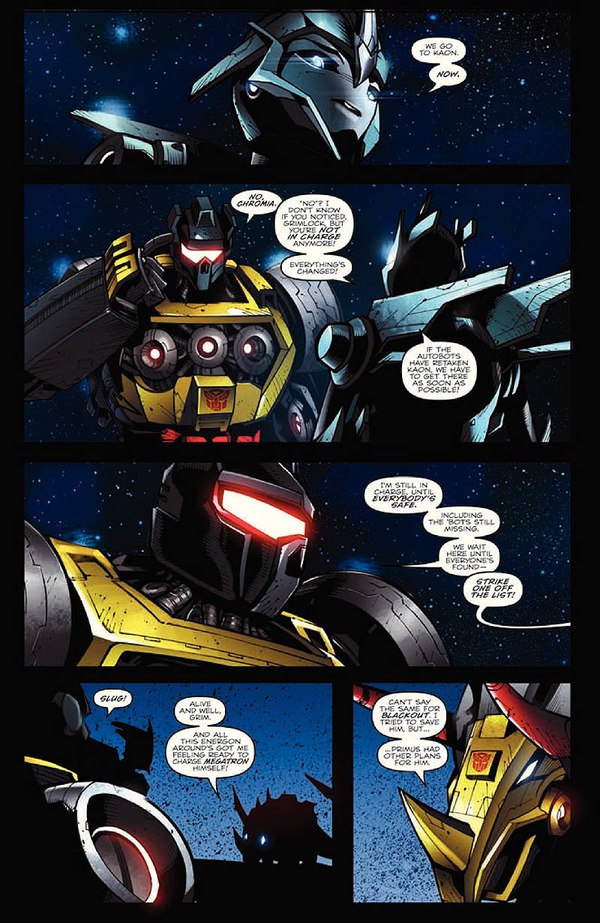 And by "Primus" we mean "the cancellation of the book." Also, nobody else in this scene would know who Blackout is. Er, was.

Most of the Dinobots have reached the surface along with the other Morlock-bots and are trying to figure out what to do next. Slug arrives, and by the way Blackout is dead. Then Swoop picks up a signal: all surviving Autobots should come to Kaon, the former Decepticon capital. Underground, Sludge confers with Firestar and Zoom on the sudden destruction of Last Spark- but not for terribly long when they're attacked by a Predacon who looks much like a palette-swapped Skystalker. Topside, everything old is new again as the Dinobots and Autobots' discussion on whether or not the Kaon signal is a trap gets interrupted by the Forged.

Beyond the obvious, cancellation is not good for comic books. Plans get truncated and story beats that were supposed to play out over far longer have to be resolved quickly. And I believe I see a lot of that at work in this issue. One plotline is resolved rather suddenly- not so much so that it seems unbelievable, but the following emotional exchange feels a trifle unearned from the amount of time we've spent addressing this plot thread. Under the circumstances you can see why the people involved would respond that way, but it still feels sudden from a narrative perspective. Then there's the matter of Blackout. It was clear from the end of last issue that he wasn't faring well, but not at all clear that he was dead. Whether that's a failure of the art to communicate something rather important or a last-minute compression of events I can't really say, but it seems a little convenient that the previously-wounded Slug is now fine and topside with Grimlock and company, but that his prisoner didn't make it. Also, why would Slug head for the surface- where he did not know anyone else would be -and not Last Spark, so he could let Sludge know that he was fine now and there was no point in going back to look for him? This seems pretty uncoordinated with the previous two issues, and I have to suspect that this was necessary to get Slug to the surface to continue the story in the time that was left.

And then there's the art, where we have Agustin Padilla back doing solo work. Look at this page in the preview gallery, where in the top panel you can make out a hastily-inked centering line that seems to be left over from the breakdowns stage. I know it's a bit of a presumption to say that it was hastily done, but like I said, the rest of the book seems to indicate this. Gone, sadly, are the background `bot cameos. In their place are a higher frequency of time-saving silhouettes- including a panel where, if not for the word balloon stating "Ungh!" you would not even guess that the shape in question is a living being. From my best guess I think it's Snarl, but that's only because no other Dinobot comes close to the proper shape. When the Forged attack, it's in an extreme long shot that diminishes the impact of the size of the force, because that way as little detail has to go into the rendering of the group as possible. There are a pair of panels delineated by thick shadows- an interesting and unusual effect that's muddied by Firestar's head overlapping into the upper panels; my first impression was "why are there two of her?" Where two characters in the book use very similar character models, the copy is a closer match than the original. I'm curious to see if they both end up in the same panel next month! On the other hand, there's a closeup in the "unearned" scene I describe above that has some nice detail and a really well-rendered expression, and it helps sell a scene that needs all the help it can get.

In the end, I think this is all symptomatic of Padilla and Mike Johnson trying their very best to steer the book towards a definitive conclusion on extremely short notice. About four months ago the writing team found out- by virtue of solicitations and Twitter - that their ongoing book was now an 8-issue series. I'm not sure where they were in the process when it happened, but considering they weren't told by editorial before it was made public I can't imagine that they had a lot of time to rearrange things. Under those circumstances a lot of the difficulties with the book are entirely understandable. I just wish that if the comic had to have a sendoff, it could've had more prep time to work on it.

Next month is the last issue of Beast Hunters and our last look at the Aligned continuity world for now; let's hope the whimper is out of the way and we can go out with a bang.