Orion Pax enters the Dead Universe to find the source of the threat to Cybertron, Bumblebee confronts the Metrotitan head-on, and Starscream is confronted with that he may have no control over his situation at all in Chapter 2 of Dark Cybertron. Written by James Roberts and John Barber, art by Atilio Rojo, James Raiz, and Livio Ramondelli, with colors by Josh Perez and Livio Ramondelli.

Bumblebee has his hands full with personnel problems while readying his Autobots to defend against the Metrotitan. Near what's left of Gorlam Prime, Orion Pax tasks Brainstorm with devising a means for safely entering the Dead Universe without being overcome by its influence before having a chat with Rodimus and Ultra Magnus about impending inevitable doom at Swerve's bar. Meanwhile, Starscream visits the jailed Scoop, who now believes the appearance of the Titan and Starscream's rise to power may only be parts of a larger event beginning to unfold. 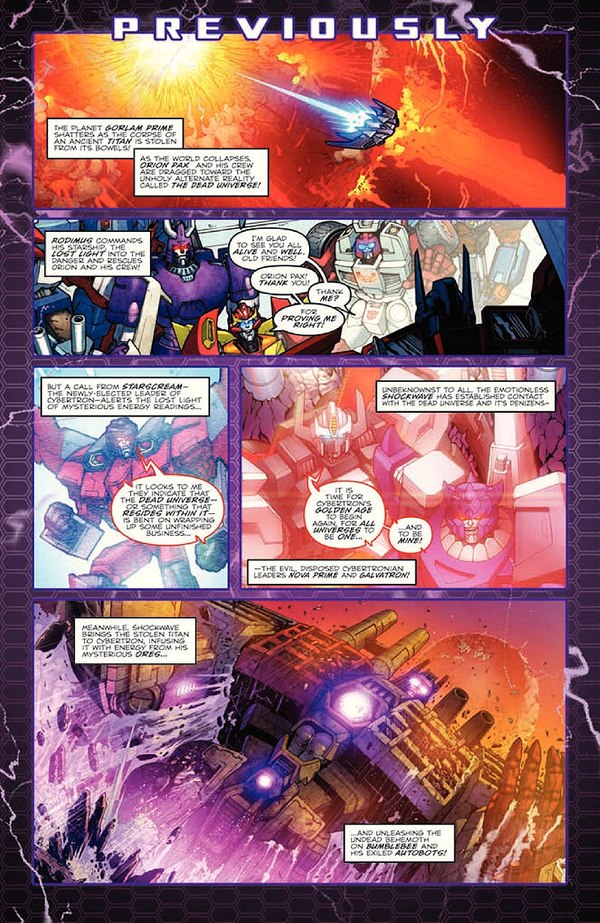 What confuses me is why Starscream visited Scoop. Rattrap suggests it as a response to Starscream considering a more direct way of dealing with the Titan, but it's never stated why Scoop would have anything useful to offer on the subject. He just does. This is because Scoop's toy will be packed with this issue and he needs to be involved in some way and he was already sent to jail back in issue 20 of RID. So what's worse: Toy coming with a comic featuring the character being arrested after portrayal in a heroic light, or toy coming with a comic that only features the character imprisoned and not doing anything but providing plot exposition?

The combination of Barber and Roberts writing makes for an odd product, and I don't think that it's come out stronger than the result of both working solo. The Scoop situation for one seems like something below the standard we've come to expect from either writer, at least without offering a little justification. That could maybe be blamed on Hasbro interference and requiring that character to be featured and they simply had to make the best of it. But there's things like Bumblebee and how Prowl and Slug treat him which gets really annoying to read even despite that the way Bumblebee is behaving makes some of it not feel exactly undeserved. It feels reading it like the arc of Bumblebee: Autobot Leader is being brought to a close and that it's going to be done by ruining the development of the character by the time it's over. Meanwhile, nobody should ever let Orion Pax, Ultra Magnus and Hot Rod sit and chat, because it will suck all the hope from your very soul. Partly thanks to the art which I'll get to momentarily, but the dialogue is just so relentlessly doom and gloom that not even Swerve can lift the mood. Can you even comprehend?! The fun James Roberts can inject to most any sort of scene and the detailed, longer-game plotting John Barber does well at seem like they're fighting each other and neither one is managing to emerge in this issue to anything approaching the degree they typically would. I hope it's only a sign of them needing to adjust to writing this storyline together and it'll get dialed in as we go forward, but right now this is among the weaker writing product I've seen from either.

The art has been divided three ways here, and going by covers for later issues it looks like this will be the case for the whole of Dark Cybertron. Currently the art is split between Atilio Rojo for scenes on Cybertron, James Raiz for the Lost Light, and Livio Ramondelli in the Dead Universe. Rojo's style is the most similar to Andrew Griffith's, and he's filled in on Robots in Disguise before making him a sensible choice to take over for something you're expecting to be done in Griffith's hand. But the characters are all just a little off models and the art a little too far on the simple side so it turns jarring quickly for the forms that we've been effectively conditioned to expect in a specific, consistent style of appearance. James Raiz is looking better than the art from issue 22, whether that shows him taking on more of a feel for these characters or having some more room to move around with this issue's circumstances I can't say yet. One panel proves that something Raiz is very good at is depression. There's a shot of Rodimus, Magnus and Orion Pax sitting together and even without the dialogue to help set the tone you can't look at it and not feel absolutely terrible and hopeless. That is the most well-conveyed mood in all of Raiz's pages. And it is conveyed in every one of his pages, no matter what the feeling of a panel is supposed to be. Still, the really harsh facial designs seem to be softening even if just slightly, so I'm hopeful that things might become less generally oppressive after a little while.

The surprise winner of the art contest this month was Livio Ramondelli. I feel like the choice to employ his particular art and coloring style to visualize the Dead Universe was a very smart one. The main action scene that takes place in those pages is honestly not super-easy to follow amid all the darkness and varyingly indistinct shapes, but what I've learned to value in Ramondelli's work is the ability to build an environment through lighting. He's made a threatening environment by putting as much as possible in shadow and very muted colors. The difficulty to make out the exact details in some places builds in to this the same way that good classic suspense movies never quite let you see the thing the characters are supposed to be afraid of in full. Whether or not this was accomplished by design, the end result works all the same and makes this the strongest part of the issue visually.

I can't say I'm thrilled with the regular art team for More Than Meets The Eye seemingly sidelined for the foreseeable duration of this crossover. The distinctive visual style they brought to the book for nearly its entire run until now helped give this title its identity, and without that it doesn't feel the same anymore. Whatever in-universe changes happen by the end of the event, I hope afterward MTMTE will at least visually return to normal.