Old betrayals are repaid while new ones lie in wait, all as the wave of darkness washes over Cybertron, in "Winners & Losers", chapter three of Dark Cybertron. Written by John Barber and James Roberts, with art by Atilio Rojo and James Raiz, with colors by Josh Perez.

Starscream again visits Metalhawk's memorial before setting off to personally visit the newly risen Titan hoping to learn its role and his own in the dark prophecy. Below, Bumblebee's Autobots try to halt the advance of the remaining Decepticons against the Titan, until Starscream's arrival shows both sides they have the same goal. On the Lost Light, the mission to find Jhiaxus is put on hold when an unusual message points toward the path of Metroplex. 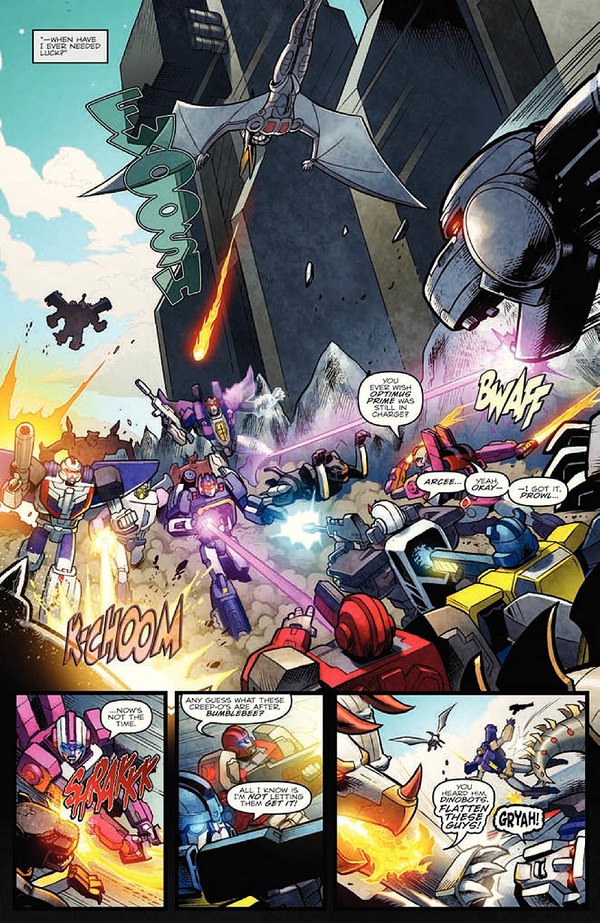 Skywarp is here someplace, I promise...

I'm a bit relieved. The first two parts of Dark Cybertron had story execution problems that were starting to be off-putting and get me worried, but finally with the third installment things are feeling more normal. It might be a sign that in both the writing and possibly the editorial side everyone is getting a better grasp on structuring things across the varied settings. The two main plot lines on Cybertron converge for a bit so it lets the exiled armies seem like they have a real place in the things that are going on instead of us spending time watching them hang around in the wilderness because They're Really Important We PromiseTM. There also lies the main narrative problem to be found this issue: It feels like part of a scene was cut off. We jump away from Bumblebee and Soundwave's groups in mid-fight when they notice Starscream arrive, and when we get back to them the fighting is halted and a truce seems to have been called. There's no indication this would occur at the end of the previous scene, and even though it makes some story logic it feels really conspicuous in the absence of even one character calling for ceasefire before we return and that's come to pass. Arcee also suddenly and inexplicably having a giant cannon out of nowhere also makes me feel like there was more material there which did get cut instead of not even being scripted to begin with, but I can only really speculate to that. There's another point or two of iffy logic, but skews way over to the spoiler end so I want to stay clear of that in this article.

Thing is, I feel willing to handwave some of that, both because I can reconcile at least parts of it on my own, and because the general flavor of things is so much better. Lost Light scenes read fun - they read like a typical More Than Meets The Eye issue now that the bulk of the panel time over there isn't Pax, Rodimus and Ultra Magnus looking sad at their drinks. What felt last time like maybe Barber doing scripting and Roberts coming over it for a character polish now properly feels like Roberts constructing the dialogue from the ground up, and it makes all the difference to the end product. Whether that is the fact of the matter, what's important is just that the right personality is conveyed in the finished product. Plus, the issue's attention is only on two main settings so both have a chance to get adequate space and not need to rush through all of their story for this half of the month. There's minor divergence at spots, but never going very far from those two major plot lines, so it doesn't become distracting or feel overly busy.

James Raiz is starting to loosen up just a little bit. What I mean by that is it looks to me like with every issue he does art for is calming down just a little bit more than the one before it. His inking style seems a little less harsh than MTMTE 23, which felt a little less harsh than 22. The variation in panel layout seems greater, as does the visual readability of shots with multiple characters. It's what I wanted to see. I wanted to come away with a sense that Raiz is continuing to adjust as he keeps working on this project. It still is not the kind of art I want to see on scenes with those characters, but I managed to make it through this whole issue without being frightened of anyone shown on the Lost Light, and I think that's great progress! Atilio Rojo's art on Cybertron stays very consistent, but that means mostly the characters are still more simple figures than what we're really used to in either of the ongoing books, and that shows very plainly from certain angles. There's a turning point though, kind of. There's a pretty fantastic two page splash which again contains spoiler content that I won't address specifically, but from there to the end if the issue the looks of everyone not part of a wide crowd shot changes just a little. The simplicity doesn't go away, but the body structures don't read so straightforward geometric, the face shapes change just a tiny bit. It's weird, but there's just these tiny shifts after the splash pages and it makes significant differences in how everyone reads. I hope it's not some kind of fluke, because if this carries forward I don't think I'll have such a tough time with the Cybertron art as I started out.

And now with this issue I want to start a new section to continue for the duration of Dark Cybertron: Toy Watch. Every issue will be packed in with a Generations Deluxe figure, and have an alternate cover that acts as card art, and this issue has inspired me to keep track of how well this angle is being utilized. This issue's alternate cover features Skywarp, so I went looking through the issue. See, I had to go back and recheck because after realizing this was "Skywarp's issue" I couldn't remember seeing Skywarp. So it turns out Skywarp appears exactly two times. Both as part of a larger group. He never speaks, nor is he referred to by name. He does appear in mid-teleportation in one of his two panels, but that's the full extent of the advertising this toy is packaged with. Meanwhile this issue would have made a pretty good pack-in for Scoop - most certainly better than either of his prior two appearances. It's gonna start to get a bit annoying if Skywarp ends up getting the focus of a scene or even a single page in the next MTMTE issue. Either that or I'm overthinking the process of assigning a given book to a given toy. Check back during December to find out!