Rodimus Prime is here, and he has four pieces of a puzzle- a puzzle that leads to a mess of cosmic proportions which it falls to him to clean up. And even the parts he thought he had under control may yet prove uncontrollable! "The War To End All Wars (Part One)" is written by Simon Furman with pencils by Guido Guidi, inks by Stephen Baskerville, and colors by John-Paul Bove. 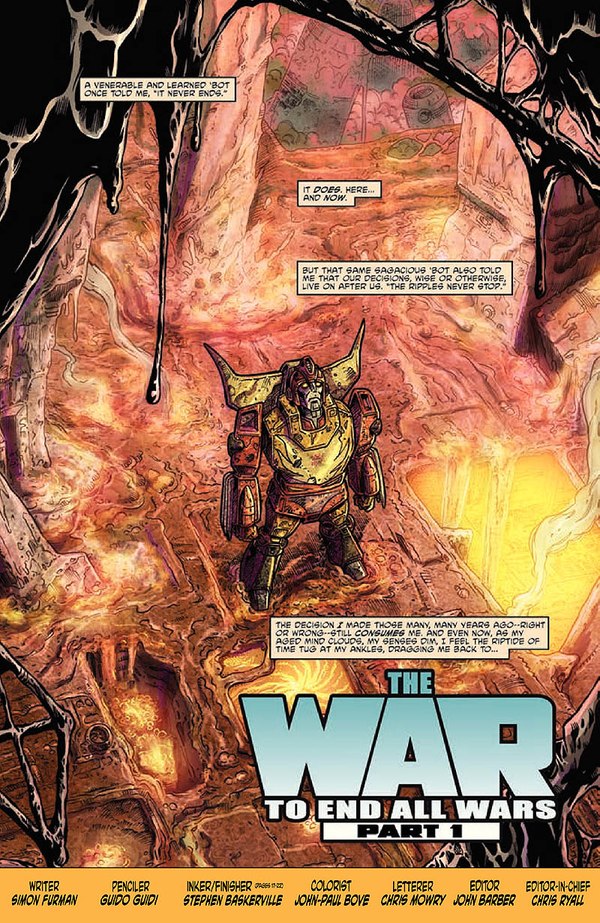 You can tell it's Hot Rod due to the narrower torso and the less angular spoiler.

In the distant future, in a molten Cybertronian-looking landscape, an aged Hot Rod reflects on the decisions he made in the War To End All Wars... the war that begins now! On present-day Cybertron Rodimus Prime directs the cleanup in the wake of Bludgeon's thwarted attack, including denying Bludgeon his warrior's death. Ultra Magnus sets out in search of Galvatron with the aid of Blurr, Gunrunner, Rapido and Skram. Optimus Prime continues the work of setting up the space bridge between Earth and Nebulos while Circuit Smasher continues to threaten to destroy the entire project. Rodimus approaches in a shuttle and asks Optimus to formally cede command, which he does without hesitation. Rodimus brings Optimus up to speed and introduces the Zero Unit- Bumblebee and Nightbeat -who will be investigating the four entities that Rodimus was warned about. On Cybertron, Galvatron eludes Ultra Magnus and his team with the help of the Acolytes of Unicron, who didn't just disband with Unicron's death back in issue #75 as it turns out. Bumblebee and Nightbeat decide that with Galvatron more or less understood and Spike and the Dark Matrix creature too unclear to deal with, the person to focus on is Jhiaxus...

Even though, with a mere 4 issues remaining, we're still getting a substantial amount of leadup and foreshadowing, this issue feels better balanced than many. While the pursuit of Galvatron does not end in the Autobots' favor, it's an entire sequence, start-to-finish, contained within a single book and it's pretty well-paced; a decent little action sequence that introduces a new wrinkle to the story. What I really wish got more time here was Zero Unit, as Nightbeat and Bumblebee's interactions provide for a certain lightness of tone we haven't had in Regeneration One very often. Other scenes verge on belaboring the message from Primus, but again we seem to be proceeding with the plan as it was before issue 0 was added. Kind of a pity, but overall this is still a solid issue.

This month, Guido Guidi gets the bulk of art duties to himself, with Stephen Baskerville only inking the final six pages of the issue. This allows for some fascinating observations: Baskerville seems to have a bit of a smoothing influence on Guido's lines even though I know he's perfectly capable of very smooth and clean lineart when it suits him. As I've mentioned before, Guido does a great Wildman/Baskerville impression, and the difference is very subtle. The big difference this issue is that Guido is seemingly doing a period-appropriate version of the style, where Baskerville of course shows the 20 years' worth of changes to his art. Again, there's a face on one of the Acolytes which is pitch-perfect Wildman/Baskerville circa the late Marvel G1 era. But Stephen Baskerville inks two of my favorite panels in the book, which coincidentally are both closeups. The one on the final page is really impressive.

The covers this month are, naturally, all focused on the newly-arrived Rodimus Prime. Andrew Wildman has Rodimus in a defensive posture with a backdrop showing many of the major players of the book. It's the most ReGen One-ish of the three, which makes sense since Wildman's art has set the tone for the book. Guido's cover apes Derek Yaniger's "Alas, Poor Bludgeon!" cover for G2 #5, "The Power And The Glory!", and as always does a nice job of it. He doesn't go for either a classic Marvel feel or an exact match to Yaniger's style, but as much as I love to see Guido work in any style he pleases and make it look effortless I don't think I can hold it against him if he continues to work in the style he's using for the interior of the book. Meanwhile, Geoff Senior's retailer incentive cover is just really neat. It's a fairly standard cover, especially for the Marvel style, with Rodimus Prime in the foreground with Jhiaxus' gigantic head looming in the background. What makes it my favorite of this month's three covers is that it's presented as though it were a paste-up for a classic Marvel cover, complete with the paper, glue, and whiteout all yellowing at different rates and an "Artist's Edition" seal designed to emulate the seal of the Comics Code Authority. Senior is the only person credited for the cover, and I don't know if he provided the basic art or did the entire pasteup himself, but it's a winner.

Sometimes it almost seems like we got 15 issues of "I Told You That Story..." to get to these five issues of "...So I Can Tell You This One." But this issue is a fair bit better at finding a balance between the horizon and the ground under its feet than much of what has come before. As I've observed before, we are kind of running out of horizon, so that's a good place to be. As I'd hoped, ReGen One is living more in its present, and it helps. A lot.