Starscream has been marked and sees his time ticking away, the crew of the Lost Light is in deep, and Megatron opens the door on the next chapter. "Into The Abyss", chapter 4 of Dark Cybertron! Written by John Barber and James Roberts, with art by Nick Roche, Atilio Rojo, James Raiz, Livio Ramondelli, and Robert Gill, colored by Romulo Fajardo, Jr. and Livio Ramondelli.

The Lost Light is under siege by a hostile army of Ammonites on the ocean floor of an unknown planet, forcing the crew to equip whatever sea gear they can improvise and engage before the limitlessly combining enemies can deal critical damage to the ship. On Cybertron, Iacon is buried in ash and Scoop begins citing prophecies to turn the survivors against Starscream - the apparent cause of the wave of death. Bumblebee and Soundwave's groups meanwhile continue hanging around the Necrotitan's feet waiting for something to do, and Orion's team continues forward to the center of the contracting Dead Universe. 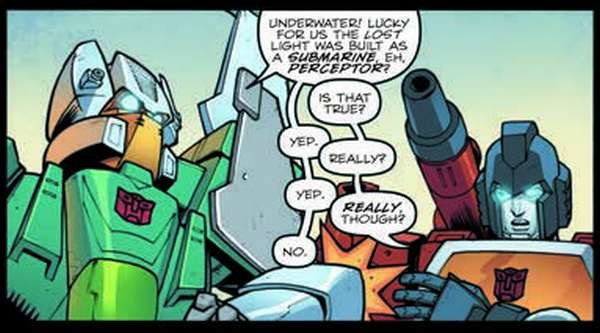 PLEASE someone give these two their own book. Even just a one-shot.

The major content of the issue does focus around the Lost Light crew and their efforts to defend the ship. The best parts don't actually involve the combat, though. The opening few pages are a great piece of the book's writing style before any action starts and are honestly just a delight to read even in isolation. The second part which I would never deprive anyone of experiencing first hand for themselves is similarly brilliant in the dialogue but really wins on the underlying concept. It's like My First Blaster, but so much more. I have sorely missed this focused concentration of MTMTE writing, and I'm so happy to have come back up to a normal level of it. Meanwhile I'm getting disappointed by the Starscream storyline. What I can say around this is the writing is odd. I think that's because of Scoop's really sudden change of heart towards Starscream. Let's keep in mind that since Scoop first appeared back in issue 20, only about one day has gone by. And just a few hours before the events of this issue, Scoop was still full out in support of Starscream as the chosen leader. Even from the outside with weeks between issues the turn around feels really quick and jarring, but within the story's timeline it's bordering on nonsensical. As well, there's so little time being spent with Starscream, he's really just showing up to be kicked by other characters and then we're jumping to another location. And speaking of which...

In my story summary, I mentioned the Autobot and Decepticon camps were just standing around still. Besides the quickly aborted fight in the last chapter, neither side has done a thing since this event began, and the dialogue is even starting to read like it backs up the notion of that these characters have absolutely nothing they can be doing in this situation but they kinda have to be there anyway out of editorial obligation. The most we're getting out of this is to see how uselessly hamstrung Prowl has become since the exile and how even Bumblebee is so sick of it he's just openly pointing it out. This part of the overall story is the most irritating and frustrating for serving no purpose and taking away from other plots that could be expanded in to this page space instead. I'd be really pleased to see the armies set aside for a couple of issues and when they come back just explain in dialogue that they've come up with a plan off panel which they're now engaging in. They don't need to be there if they're not pushing the story forward, and they're not even splitting the difference by giving character material. I already know they all hate each other, I'm not getting anything out of having that expressed every time we catch up with this group in lieu of plot development. Shockwave's scene ends up being done really strongly despite being about as brief as Starscream's appearance this issue. The disparity makes it feel like there's a lot of effort being put in to the pieces of story that push the overarching plot along, while they're just coasting along on the secondary story elements that they don't seem interested in doing anything with at all. It's totally succeeding in making me not interested in those things either, but I'm pretty sure that's not the goal here, right?

The opening few pages with the best writing in the issue also happen to be accompanied by some Nick Roche art. While he is only here for this single scene, it's enough. I'd have enjoyed all the Lost Light scenes being drawn by Nick, especially for the underwater combat panels, but if he's going to be anywhere I'm really glad it was in a sequence that called for the characters to be especially expressive. Raiz picking up right after the crisis begins works in the story's favor, anyway. The heavy inking and strong shadows typical of his linework fit in alongside the coloring to both make the ship's interior appear bathed in emergency lighting, and also to give a value of murkiness to the exterior panels, both being incredibly appropriate. This issue also has art contributions by Robert Gill, who off the top of my head I can't recall having worked on a Transformers title before. I believe he drew the final pages and thus is the third artist to take Lost Light scenes in this issue. The style is very nice, skewing more towards Milne end of the scale than Raiz, but carrying a unique feel. The solicitation for RID 25 has him listed as well, so hopefully he'll have a real shot at showing us what he can do with these designs when he has more than two pages to play with. Romulo Fajardo, Jr. handles coloring on all non-Ramondelli pages in this issue, and I like the work quite a bit. He's previously done coloring for some of the movie universe comics and a few RID covers. I think it's probably a credit to his coloring style that three separate artists' work in the same setting can actually begin to blend and not be horrifyingly upsetting. Basically, the overall visual presentation is doing really nicely.

Toywatch! More Than Meets The Eye 23 is the pack-in comic for the Mini-Con Assault Team. Thanks to Brainstorm we get a "Mini-Con" namedrop in the dialogue, but these guys are - as we all expected from issue 22 - revealed to be the Ammonites, whose war Whirl unwittingly made worse. As toy commercials go this is pretty on point. They make references to how the small robots can combine to become big guys and have altmodes of their own, and they appear quite powerful. Plus the book shows them to be in mass of number and everybody loves a troop builder, right? The only misstep is the story portraying them as having potentially unlimited stages of intercombination. If these were Mugenbine toys that'd be pretty much true, but I expect these toys will be limited to just the one combination. But this is probably the most well done toy tie-in so far. But then anything is a step up from Skywarp. Who again only appears this issue as a tiny, block-colored figure in a crowd.