The Dinobots and Autobots are reunited on the surface of a renewed Cybertron, but the reunion is short-lived when a Predacon attacks. The war for Cybertron ends here, in Transformers Prime: Beast Hunters #8! The issue is written by Mike Johnson from a story by Johnson and Mairghread Scott, with art by Agustin Padilla, colors by Priscilla Tramontano, and lettering by Tom B. Long. 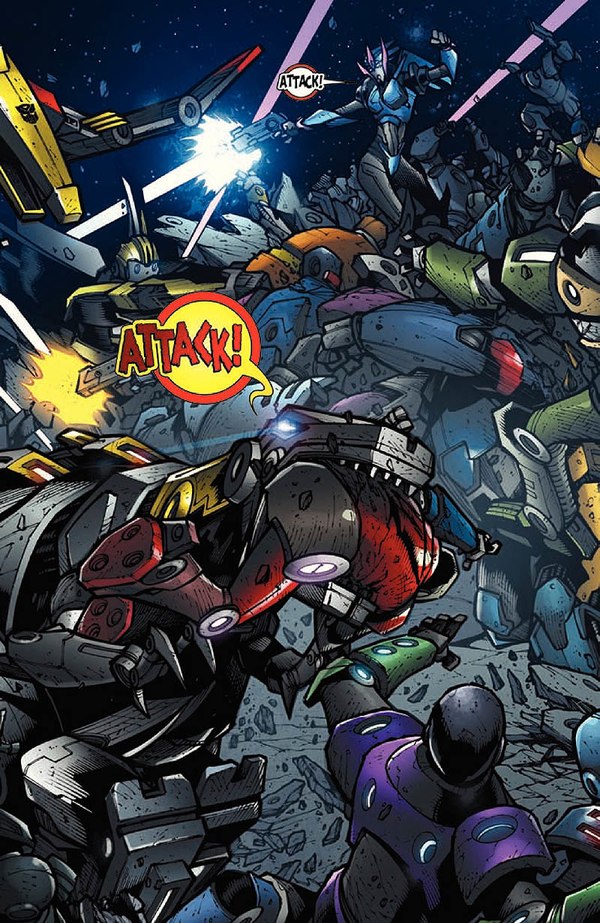 Agustin Padilla's going out pretty strong! But there's something about Bumblebee's face that's just funny to me.

The Dinobots, Autobot refugees and Team Prime join forces and defeat the Forged, and then swap "what have you been up to?" stories. Just as Arcee fills Grimlock in up through Predacons Rising, a Predacon rises to attack the group, and Arcee gives Grimlock a quick lesson on those as well. After smacking around some generics the Predacon retreats- but Grimlock has a plan to deal with the Beast...

Chronologically, this issue is our last look to date on the Aligned continuity in general and the Prime setting in specific. And counting the end of the series and Predacons Rising, this is our third final battle. Due to the nature of the comic and how it can and can't operate relative to the TV series, it's kind of an anticlimax. Even taken on its own, just within the too-short history of the comic, it's not a really strong ending. You definitely get the sense that the series was supposed to move on from here, and honestly this would have been a much, much better place to begin the series rather than end it. But again, the timeframe of the cartoon made that unfeasible. In terms of the actual happenings of the issue, the book does benefit greatly from the reunited teams, which gives the narrative a lot more focus and coordination than the last issue's. It's a very straightforward story, and the resolution ties in fairly well with the themes of a changing world this story arc has had.

Agustin Padilla puts in a good solo effort for his last issue, with fewer shortcuts than we've seen in quite a while and some good, sharp rendering with only a few of his usual art quirks- like Grimlock's ever-shifting face perspective -coming to the fore. Bumblebee's face is hard for anybody to draw without it looking extremely creepy, and that's true here as well. There's one panel intended to be touching or inspirational that maybe lays it on too thick. It looks like it should have a crying robot bald eagle in the background. But I'm willing to bet that Padilla delivered exactly what the script called for here. On a very positive note, he renders a nice, dramatic and well-staged tail-whip attack during the fight with the Predacon- that was one of the first things about his art that ever bugged me way back on Rage of the Dinobots. So if nothing else the artist has gotten a good character arc in the course of our story. As I've said before, Padilla puts out some good stylized art when he's not rushed, and I'm hoping that some monthly book experience will help him manage his time better from here on. Quirks and all, if Padilla maintains this level of quality in his work from here out, I'll be more than happy to see him on Transformers books in the future.

And lastly, I need to follow up on something I mentioned last month. The two characters sharing a model that I referenced in a spoiler-free manner are, as you've now seen, Arcee and Chromia. Chromia was more on-model than Arcee was in that issue, and I was wondering how they would address that similarity this month. Well, they didn't, or rather they went out of their way not to. Chromia has ceased to exist entirely, with no mention of where she went. Firestar was told last issue to find her and take the refugees to Kaon; we see Firestar again in this issue, but not Chromia. She vanished, and I'm almost positive she vanished so Padilla would not have to put them in the same panel. The alternative is that she vanished to give more pagetime to Team Prime over the supporting characters of the actual comic, which is also possible. But Firestar does show up where Chromia doesn't, so maybe it's a bit of both.

More than anything, I feel the things that brought this series down were as much external as internal. It's had its growing pains as all new comics do, but it had good writers and seemed to be going somewhere. We're never going to see what else Shockwave was working on, or get a rematch between Grimlock and Ser-Ket, or see any of the other things that were possibly in store for what was intended to be an ongoing book. I feel as though the best was still ahead for Beast Hunters, and it's a real shame that we're never going to get there.