The Autobot/Decepticon alliance moves against Shockwave, while Nightbeat invades Cyclonus's privacy during a break on the long march to the center of the Dead Universe. "Finest Hour", chapter 5 of Dark Cybertron! Written by John Barber and James Roberts; Art by Robert Gill and Livio Ramondelli, with colors by Romulo Fajardo, Jr and Livio Ramondelli.

Bumblebee and Soundwave's teams storm Shockwave's lair to shut down Megatron's space bridge and access the resurrection ore to help their injured and dying. But even as Ironhide physically forces Nova Prime back down through the warp-hole in Megatron's torso, the mission quickly begins going wrong. Pax's team has an awkward reunion with Nightbeat in the Dead Universe, who helps explain some of the important mechanics of existence in the collapsing world, including the means of surviving his own fatal damage inflicted by Hardhead years earlier. 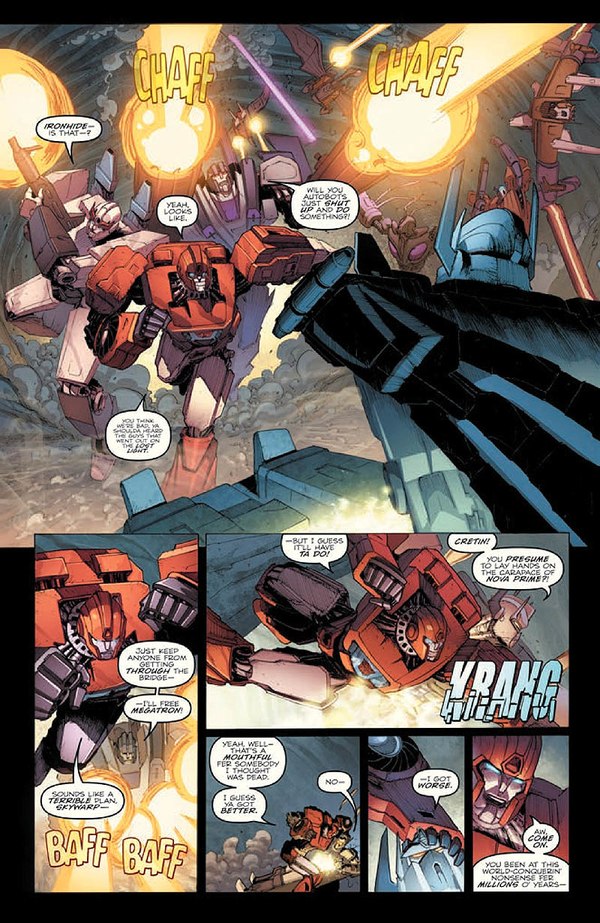 This is a lot of what I was wanting for weeks already - the exiled armies finally have some relevance and things to do as they take the fight straight to Shockwave now that Soundwave has been able to trace its location from Megatron's agonized screams. The time on Cybertron is taken almost completely with the resulting battle, so there's not a lot of story being thrown across in the course of that. Some things are also left to be assumed between issues, but make logical sense so you're not thrown for how we've jumped from the end of standing around to blowing a hole in the wall. And Shockwave continues exhibiting echoes from his moment of precognition a little while back by anticipating the moment the attack would start. But as is appropriate for this stage of the story basically nothing goes entirely right for our heroes and it just keeps piling around them over the course of the battle. In the Dead Universe, a lot of it is expository, but I think it's necessary and helpful since even within the existing IDW buying audience there's probably enough that don't have deep background knowledge of what's going on there, or with Cyclonus and Nightbeat's histories, nevermind that anyone finding this for the first time with a toy purchase would be really in the dark. It also serves to confirm what most probably suspected about what's happening with Cyclonus, which along with Nightbeat's own self-revelation makes the future here unclear at the best of cases.

After a solid, if brief showing at the end of MTMTE 24, Robert Gill gets around half of this issue to show his stuff, and I really like what I'm seeing. His style is distinctive here, and while the character models are being exaggerated in some ways, it's done in a way that appeals to me despite not strongly matching prior art. Some things look a little on the odd side, like Metalhawk, but on the larger whole he draws robots I like. I will note that some of the action panels can be difficult to get what's meant to be happening without studying them, but that's countered with really dynamic posing of the characters. You really feel that they're captured in motion. Gill is showing a really strong ability to draw individual character action, and I think needs only a little more refinement in putting them together in a shot in a way that really shows the intended actions clearly. But there's bits like a transformation sequence on Dreadwing that looks really smooth, immediately following a dive and tumble in to a wall that just looks so good, so well staged that I can stay impressed. This is another artist I'm seeing for the first time on a Transformers book that I'd really like to end up with sticking around and doing more when it's not a case of needing every available artist on board to get the huge project done. Ramondelli is still on Dead Universe duty, and it's growing repetitive. Since there's no scenery or anything to vary in that setting, all the lighting conditions stay the same, all the backgrounds are space with indistinct flotsam, and it's all the same characters. It was good looking and a smart use of the artist to begin with, but I'm at a point with this where I'm gonna start needing some differences to come up. With any luck maybe we'll shift in to some activity over there in the next chapter so it at least stops being a talking head show.

Toywatch! Our cover character this issue is Rattrap, whose toy was just revealed last week in the TFCC magazine preview. Correctly for what will be the toy's packaging art this illustration plays up the fur and organic parts angle rather than roboticizing the details to better match other denizens of Iacon. It also - very important here - looks way the hell less weird and creepy than Rattrap has been turning out in most of his appearances so far.

And Rattrap is our prize winner so far as he does not appear at all in the issue bearing the toy's likeness! Oops! There wasn't an Iacon scene in this issue which is great for keeping focused story telling where it counts, but that makes this a basic failure as a toy ad. Meanwhile, Skywarp has gotten his first lines since Dark Cybertron started, but even without the case assortment order to consider I wouldn't have nominated this issue as a pack-in for him. However, depending how the subsequent issues shape up this might have been a good choice for Nightbeat who I'm pretty sure is in the same wave as Rattrap. Oh well, better luck next month!