With the completion of Beast Hunters and Predacons Rising, the book is closed on Transformers Prime. In this case, however, the book is not metaphorical. In Transformers: The Art of Prime, we get a chance to see all three years' worth of design work for the Emmy-winning series and meet the artists who created it. Want to know the name of Ultra Magnus' ship or the influence behind Airachnid's robot mode head? It's all in here. The book is written by Jim Sorenson (The Ark, Allspark Almanac) with a foreword by Peter Cullen, and features interviews the designers and creative directors who gave Prime its look. 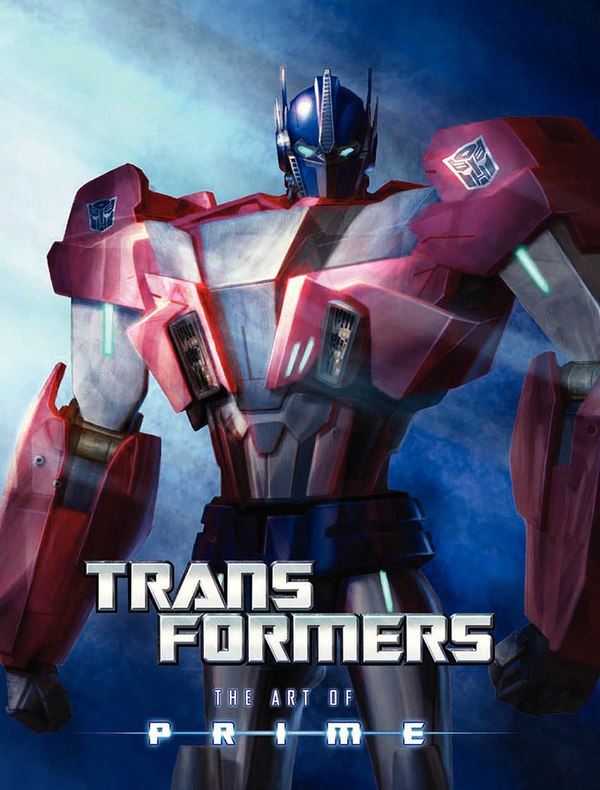 Orion Pax, who was given a dedicated Cybertronian form since he had so many flashbacks to be in

The book is divided into three major parts- Characters & Props, Backgrounds & Locations, and Color & Effects -with chapters dedicated to Autobots, Decepticons, Humans, Earth, Cybertron, and so on. Interspersed throughout are quotes from the designers and art directors for Prime discussing their design inspirations and goals in creating each of the characters. Every character gets at least a full page, with most of the main characters getting several. Vehicle mode transformation sequences are shown for some, weapon deployment sequences for others, and example expressions in pencil are given for quite a few of the characters. Those are some of my favorite parts of the character section; not to lessen the accomplishment of the modelers and animators of Prime but even in some of the super-clean hand-drawn sequences there's a certain lively quality that comes through better on the page. Which makes sense I guess; images that were designed to be static work better in print. The second part of the book features both gorgeous concept art for the world of Prime as well as both barebones and finalized renders for locations like Kaon, the Nemesis, and of course the ever-present Energon Mines. Lastly, the color & effects section highlights other aspects of production like the still paintings used in many of the show's flashback scenes. It's nice to be able to dedicate some time to those without pausing a DVD!

Interviews are included, and the interviewees are Supervising Director/Art Director David Hartman, Art Director/Character Designer Jose Lopez, Production Designer Vince Toyama, and Visual Effects Art Director Cristophe Vacher. The interviews are lengthy, in-depth, and insightful about the process of 3D animation, its limitations and its capabilities. It helps that Sorenson is clearly an experienced and knowledgeable interviewer, and gets a lot of good information out of his subjects. All seem to have enjoyed working on the show and all agree that Polygon, the Japanese studio that handled the animation, deserves a good deal of credit in the show's success and its style. Overall you get the impression that the people who created Transformers Prime enjoyed working on the show and working with each other, and are extremely proud of what they've accomplished, as well they should be.

Overall, I think this is a worthwhile book for fans of the show, and for people who want to know more about how 3D animation works. The selection of art is carefully thought out and its reproduction is clear, clean and sharp. Jim Sorenson is an old hand at artbooks- especially Transformers artbooks -so you can expect an excellent addition to your Transformers library.

And for the record: Ultra Magnus' ship is named the Iron Will.