Rhinox is rare among robots. He has a brilliant scientific mind, as well as a deep philosophical curiosity about the nature of the universe around him. He is astoundingly strong -- able to hold his own against even the most powerful opponents. He is friendly, good-natured and charismatic, with a fine strategic mind that would make him an ideal leader for the Maximals' forces if they didn't already have one. What's more, he carries one of the most powerful weapons of any Maximals in the form of the twin Gatling Guns of Doom, which pump out a Predacon-shredding storm of hot lead.

Rhinox was the only Maximal who never got a new body, which seems appropriate to me since he was probably the closest of any of them to being comfortable in his own skin. Unfortunately, that means he's never had a toy that really reflected his animation model since most of the first year Beast Wars designs were heavily modified for their use in the TV show. A lot of the characters have gotten newer figures to remedy this, the most recent being Dinobot which was a mixed bag to say the least. But with the 30th Anniversary of Transformers roughly 3 weeks away, we're trying again. Waspinator is hitting stores as we speak, Rattrap is out sometime next year, and Rhinox is finally the Voyager-size toy he probably should've been in the first place. 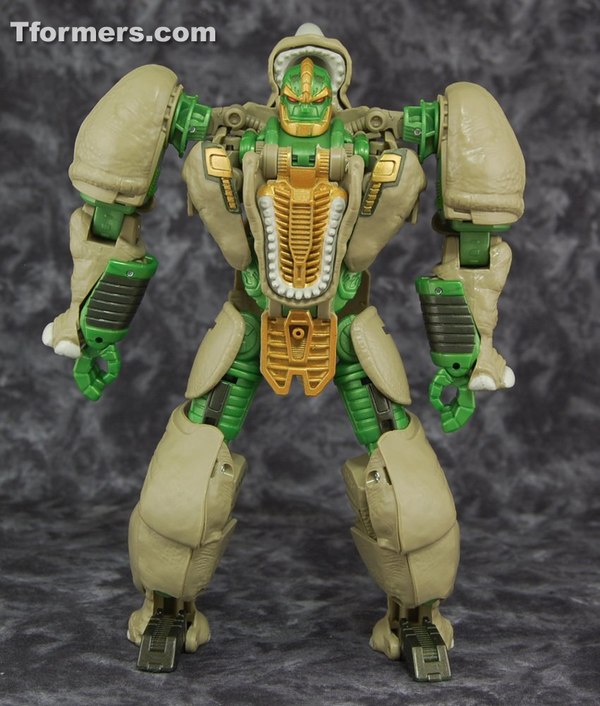 Rhinox looks quite a bit more like his TV self now! It's not an exact match, though, following the frequently-used Classics/Generations pattern of creating a hybrid of the original toy and the animation model. His physique has been exaggerated a bit more, with broader shoulders and a narrower waist. The biggest difference from TV Rhinox is the rhino-jaw chestplate, where the toy's details have been used to deal with the lack of detail on the 1995 CGI model, and I think it's a good choice. The face is a bit shorter and broader than it looks onscreen. The shoulder details are different- there's more of them, speaking again of CGI that will be old enough to vote soon. There's a little more robot arm sticking out of the rhino leg too. In the cartoon Rhinox essentially looks like he's wearing a long rhino-skin vest, which this figure replicates, more or less, with some side-panels on the chest combined with some armor plates on the hips. It works fairly well, though it does highlight how very narrow the waist is. 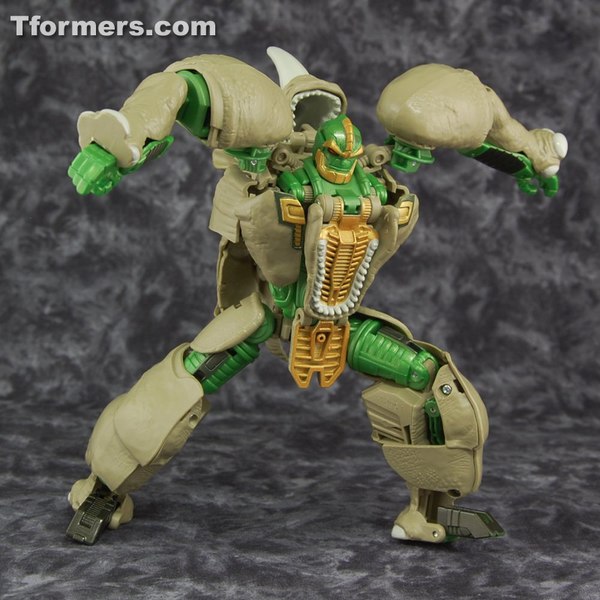 Articulation's not perfect, but it beats Universe/Henkei Dinobot by a fair margin. The ball-jointed neck is angled to allow for a decent amount of tilt, and swivel is fine as long as you navigate Rhinox's lantern jaw around the ridges on his shoulders. The shoulder joints have the best and least restricted range of any joint on the figure, which can be raised well above Rhinox's head and swivel the arms 360 degrees. The elbows are sadly on the opposite end of the spectrum, flexing to less than a 90-degree angle. They swivel without issue though. The waist does turn a minor amount, but if you push it too far it'll start pushing the lower body apart. The hip joints get great range on both their axes thanks to the shape of the lower torso, but they're very loose which makes for difficult balancing in many poses. The thigh swivels work fine. The knees are about equal to the elbows thanks in large part to the large portions of rhino backside he's wearing for legwarmers. But, they suffer from the same looseness that plagues the hips, making it even tougher to get Rhinox to stand. There are hinges in the ankle to allow Rhinox to plant his feet a bit wider, which is handy.

Rhinox looks great. From the front. Even the back doesn't look too bad- there's just one central mass of kibble consisting of the Rhino's head and tail folded up neatly. But from the side, it's a bit problematic. There's a very large gap through the lower torso that really doesn't do a lot for the illusion. I'd almost have wanted to sacrifice the waist swivel to make him look more solid... luckily there's a way you can do this. The transformation mechanism folds up into the torso (matter of fact, it's difficult sometimes to keep it from doing so, filling most of the ugly gap and making him look a bit stockier, which matches the original animation more effectively. You lose most of the effectiveness of the waist swivel, and a tiny sliver of the hip range, but for the improvement to the looks of the figure it's entirely worth it in my opinion.

It involves a shell, but Rhinox isn't really a Shellformer in the derogatory sense. Most of the segments of rhino hide become parts of his body, after all. The hands fold up in the forelegs, and the rest of it involves unfolding the rhino bits and getting them arranged. Tabbing together the rhino is tricky at points, especially at the back end- but as long as you've folded the hips in the right direction it's not super-challenging. 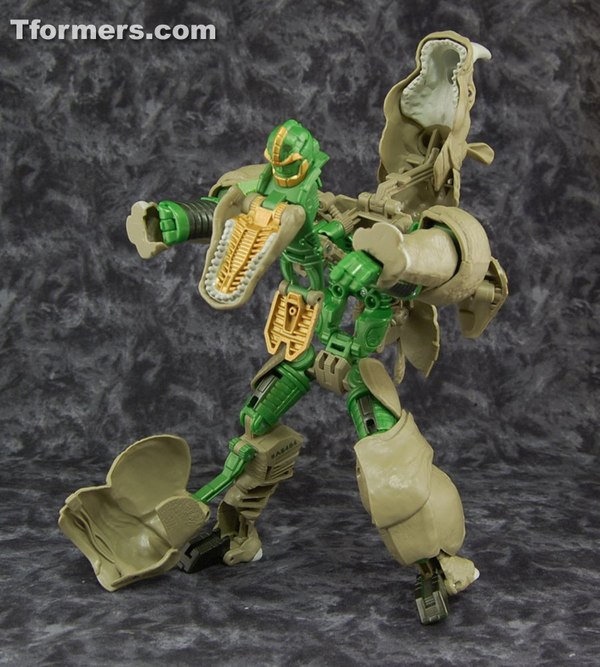 Rhinox is a tan rhinoceros that's a bit lighter-colored than the show version, closer to the original toy. The face is based more after a real rhino than the CGI, so we get beady little rhino eyes instead of expressive cartoon eyes. The folds in the rhino's skin are used to hide joints and breaks between parts effectively. There are some parts that do show- the aforementioned expanded green area on the forearms- but it is possible to pick your angle of viewing to minimize that and it's reasonably minimal. Rhinox's horns and ears are made of child-safe soft plastic, and the ears look particularly nice, as odd as that is to say. Not just for child safety but for fragility, you wouldn't dare sculpting them like this in hard plastic. 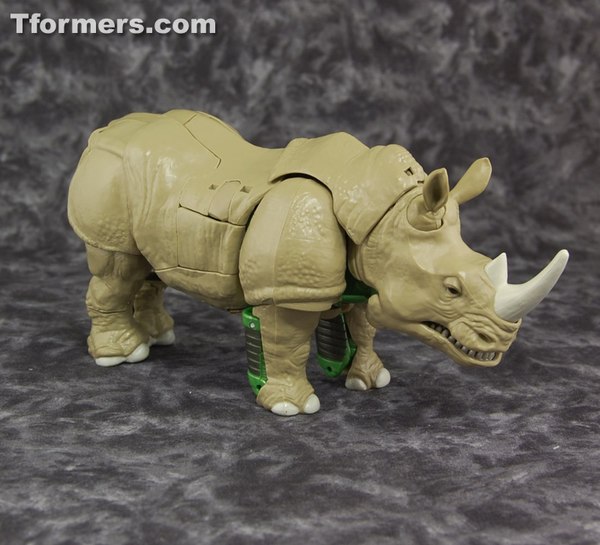 As is frequently the case with Beast transformers, articulation is limited in this mode. Not as badly as the Big Convoy/Ultra Mammoth mold, for one example. The limbs all move, but the bigger question is how far you want to move them without risking the illusion that this is a rhinoceros. The jaw is hinged for the transformation of course, but if you want to keep up that rhino ruse you'd probably best stick to small bites.

Rhinox has his animation-model Chainguns of DOOM, or Gatling Guns. Whichever you prefer. The original Rhinox toy had this accessory that was a buzzsaw attached to a box that let you spin said buzzsaw by pushing a lever. You could then attach a pair of maces on chains to the buzzsaw blade, making it a thoroughly `90s contraption that would... cave your head in, then cut it off, I suppose. Mainframe decided to take the basic ingredients of this thing, multiply them by two, and give Rhinox some equally-`90s miniguns. And that is what we have here. They totally still spin if you push the levers though- they're disguised as the sights, which is simultaneously a nice touch and also a little silly since the sight can't possibly see past the spinning blade. 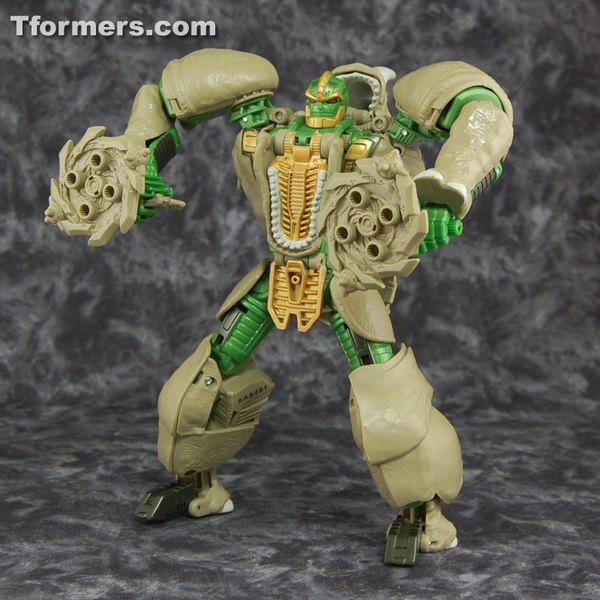 This is one time where I wish Hasbro had not gone for the more natural hand design. While it's good to get a nice sculpt of Rhinox's three-fingered hands, the extended fingers clash with the CoDs' grips, meaning he can only hold the weapons properly at an angle. He can angle his arms to compensate fairly well, but if you want them pointing straight ahead as they really ought to be, they're going to flop around in his grip.

Storage works a bit better, at least in Beast Mode. The grips fold up and the barrels/holes on the blades/faces of the guns lock together at an angle, which allows you to stuff them up inside the Beast Mode's abdomen, invisible from all optimal viewing angles. Sadly there's no Robot Mode equivalent I've found, like one that'd fill those gaps in his lower torso. They're not perfect, but they're decent.

Which is a pretty good summation of the entire figure! Rhinox is Good on the Figurereviews.com Non-Numeric Rating Scale. He's got quirks, and he's difficult to stand, but he looks good and has an interesting but not frustrating transformation. He's a much-needed update of a much-loved character, which is what Generations does best in my opinion. Now to get Rattrap and Waspinator, and maybe a new Cheetor.

Because Universe Dinobot has issues, but we do not even talk about Universe Cheetor. 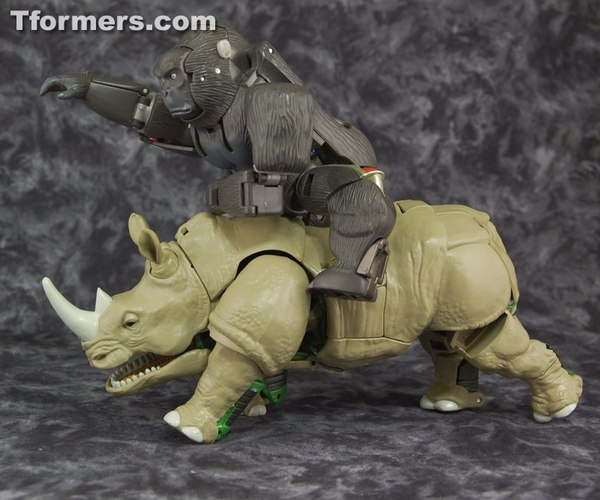