Release Data: Released in the United States in December of 2013 at a retail price of US$12.99

Goldbug is an individual in the IDW continuity who is not Bumblebee. Goldbug is also a name Hasbro is not able to use for a toy, as evidenced by the previous homage to Goldbug in the Legends scale being sold as Gold Bumblebee. In this case Hasbro reached in to the big bag of trademarked words that don't mean anything and found Goldfire, which was a name modifier created during Transformers Animated. In the context of IDW's Robots in Disguise comics, this iteration of the character might be correctly identified as Goldfire Bumblebee, but the toy is just Goldfire. I wonder if they tried for "Goldbee" at any point...?

His armor may be resistant to the laser fire the of the Decepticons, but beneath it, Goldfire is the same robot he's always been. Once known as Bumblebee, he had the chance to lead Cybertron to a new golden age, but now it looks like that chance has passed. With all that he's built seemingly collapsing around him, all Goldfire can do is keep fighting to save all that he can.

When released as Bumblebee, this mold had no particular design problems. It's a bit on the basic side, but it's pretty solid. Where Bumblebee fell hard was the deco. I don't just mean the paint, even though some of that was utterly atrocious, but also in the kind of plastic used for a lot of the parts. It had a terrible visual quality that ruined the entire thing. Goldfire comes back with a whole new set of plastic colors, and to the great benefit of the toy, none of them look like they have a second job as candle wax. The switch of plastic has had a positive impact on the robot's joints, making them all just a bit tighter and sturdier feeling. While Bumblebee didn't have a bad physical quality of plastics, the stiffer joints make Goldfire feel better as a toy. Even the awkward door wings hanging from the shoulders have become considerably more stable and end up not feeling so intrusive on the toy's poseability anymore. 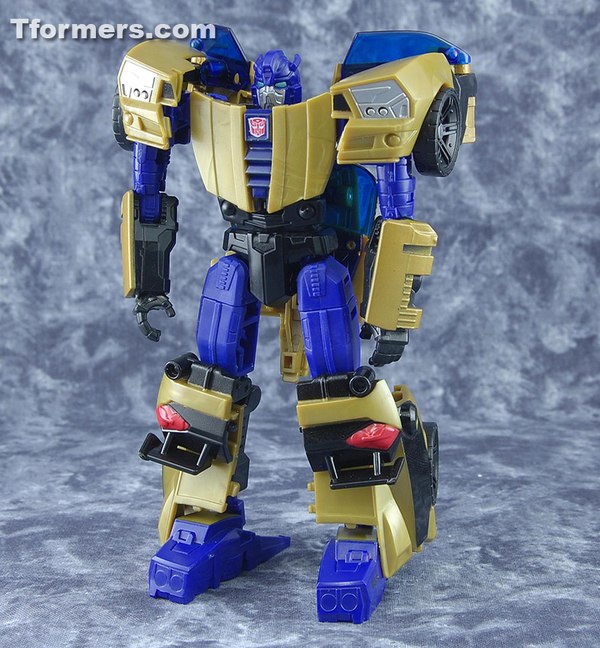 The navy blue, gold, and black that make up the robot's coloring give Goldfire a muted look that I like a lot, especially compared to how blinding Bumblebee could be to look at. The gold plastic which subs in for most all the yellow that was an issue on Bumblebee is more visually solid and shows the sculpted detail more strongly. There are some very distinct swirls in the gold plastic, which some people point to as a possible cause when gold plastics become brittle with age. Hopefully that will not occur in this case, but it worries me just a bit. The gold has a pearlescent finish giving it an illusion of depth beneath the surface as it catches the light differently depending on the angle. The outer panels of the forearms are painted once again here, but enjoy a far better color match, not even obviously standing out with the arm's gold paint right next to the gold plastic on the chest panel 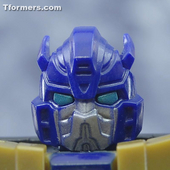 Goldfire's new head is represented accurately in the comics, although I think if anything the comic art might be scaling down the size of the eyes which seems unusually large on the toy. The lightpiping element for the head is paint dipped, making the eyes a bright metallic blue. I presume this was done so the eyes would not be the same dark blue as the result of the clear plastic on the toy and so completely vanish in to the navy plastic of the head. And neither does any of the sculpted detailing as the head is in a nice looking plastic and not Lemon Starburst.

The transformation is a little less smooth because of some of the joints tightening up. In particular I've had trouble with getting the side body panels lined up to fit and lock in place without things feeling a little unhappy. As much as the robot was helped by the tiny variances of the new plastics, the transformation turned a little more difficult.

The car mostly hides the navy blue, only representing its presence in the shade of clear plastic for the windows, keeping it from seeming out of place. Most of the car body is gold plastic. Tires aside, the only place black is not represented by paint is a small chunk that's part of the hinging for the door wings. That's incorporated in to a strip pattern along the side panels which very effectively blends it in to the car's deco. The doors are painted gold, actually being navy plastic - I figure the doors are probably tied to the head color since Bumblebee's doors were yellow but not painted over from another color. There's a visible difference between the paint and plastic since gold paint always has a more metallic quality than the plastic can safely, but it's not a hideous mismatch in any way. Goldfire keeps painted headlights, grill, and tail lights, but loses the hubcaps and rear window paint to fit the complex paint operations of the black stripe along the sides. I think the absence of the rear window hurts the appearance the most. It would have helped throw some alternative color on to the rear half of the car which is dominated by the gold. 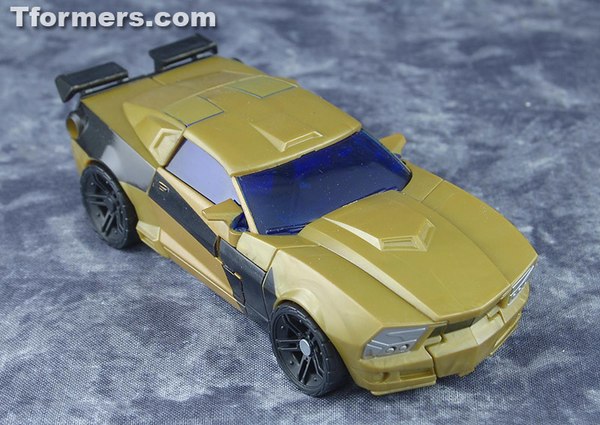 The pearlescent finish to the plastic really shines in this mode and makes the car pop in a way a simple glossy finish wouldn't. But there's a lot of gold uninterrupted here, and to be honest it makes it read weird. The black stripes help the panels where they lie, but the hood needs something to break up the gold just as much as the rear window is needed for the back end. A gold car looks kind of weird anyway, and I think needs whatever distraction it can get to keep you from looking at it and realizing that, yes, this is a car entirely colored gold. But, you know, it has to go along with the required robot colors of the character. And at least it's not that horrible yellow. While that may have been more representative of a real car, it was also an offense to the senses.

Goldfire still comes with the I have no idea what they are weapons. Now fully in navy blue with no paint at all, and the dark blue clear plastic for the tips that I also don't know what they're supposed to represent. They look fine in this solid blue, so I'm not feeling like I'm missing paint work. I still wish I knew what exactly they were supposed to be in a given use, though. Also while Bumblebee was able to wear these under the forearms, the pegs on this version won't fit those ports anymore so it's hand-held or nothing for Goldfire.

My hopes of finding a version of this toy I could live with in its recolor have proven out. I always felt like the engineering of Bumblebee was fine ...since most of it was lifted from RTS Windcharger, granted... but was killed by a terrible plastic choice. We may come to learn down the road that this choice of plastic was a mistake for different reasons altogether, but right now it gives a fine Transformer an acceptable if not actually kind of attractive deco. Goldfire's a solid Good on the figurereviews.com Non-Numeric Scale. I've been looking forward to this and I'm honestly happy to finally have it.

Of course if this is not exactly to your tastes either, you could go for the Takara Goldbug Bumblebee which uses the mold's original head in blue, doesn't use the waxy looking plastic, and also throws some gold paint around. Whatever you decide you like best, it's worth having an instance of this mold. As long as it's not the original one.