The Transformers: More Than Meets The Eye 25 - Generation One - IDW Comic Book 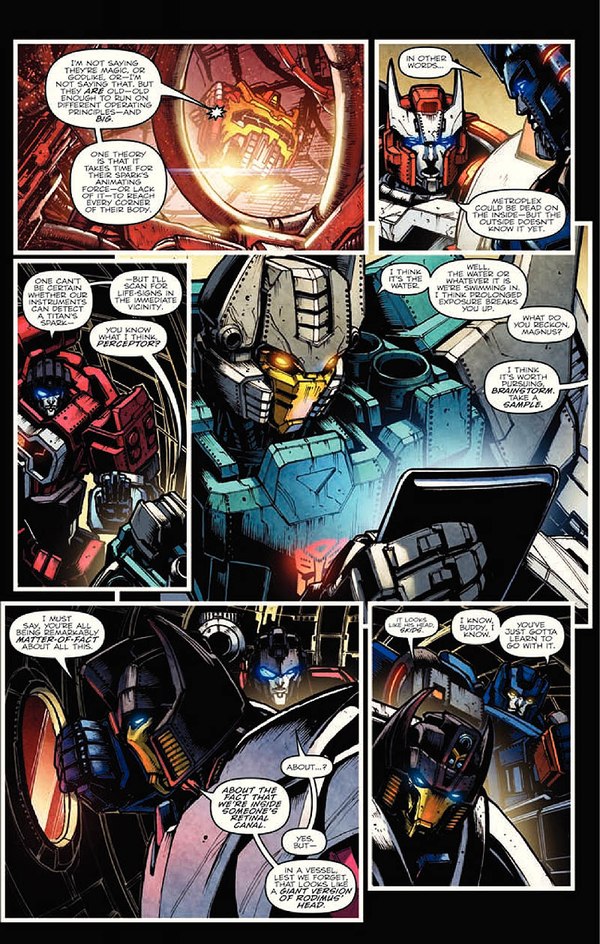 The survivors of the attack on Shockwave's lair and the Necrotitan's deathwave flee to Iacon as Shockwave guides his weapon toward the city, as Starscream learns that those who died from the wave immediately may have been the lucky ones. Meanwhile, the Lost Light team inside Metroplex begin a desperate search for signs of life in hopes of salvaging him and quickly ending most of their current problems.

It's looking like the story's structure has found a comfortable balance point. Getting a quick update on Bumblebee and Soundwave's groups, a check in on Iacon, and then spending a good amount of time working on the big thing from the end of the previous MTMTE issue. Having a clear focus for each issue is helping a lot to get over the early feeling of overcrowding by trying to use almost everything at once. There's some good feelings of continuity at work in small ways, like Swerve's ringtone from Dark Cybertron Chapter 1, and My First Blaster from farther back than that. Although without knowing the production schedule of this event versus the regular runs it's hard to say how far of a reach-back MFB ends up being. But a lot like issue 24, this has a lot more of the feeling of being a MTMTE issue that's participating in a crossover than being half of a crossover story being sold under this title. It's starting to give me back some comfort that I wasn't really having at the beginning. But the Dead Universe portion is still feeling really drawn out and killing time even as it is still really slowly moving back towards actual possible plot relevance. I suppose even the agonizing standing-around phase of the exiled groups on Cybertron gave way to doing something useful and this probably will too. I'm just getting sick of the pace of the build toward that point.

The Three R's (Rojo, Raiz, and Ramondelli) are back for art duty again after the fun change of pace in RID last month. And there's not a lot specific to say about that. Raiz has leveled off some, still being less harsh looking than he began, but falling in to enough of his usual style traps with common poses and facial expressions. And rivets. He also gave a really confusing two-page spread with bizarre panel orientations and flows that may have been trying to convey some sense of spatial discontinuity within the environment, but it really just gave me a headache. I still think having Raiz and Rojo art back to back in the same book is probably not a great idea since they're about as disparate as you could get with Rojo's almost cartoon simplicity and Raiz ...well, being Raiz. An issue featuring only Raiz and Ramondelli might not be everyone's first preference, but their styles do mesh well enough that the transitions aren't jarring. Speaking of, the Dead Universe is still mostly talking heads, but thanks to now being set inside a green forcefield box the tint of all the characters is slightly different! And that's about all to report on that front.

Toywatch! And hey, we have a pretty decent result this issue. This will be the pack-in issue for Tankor, and Tankor not only appears in this issue, but he has a name-drop and even dialogue! ...as an assistant to (ex-)Decepticon medic Flatline at one of the makeshift infirmaries trying to treat the victims of the deathwave. As it turns out, Tankor's not really a fan of Starscream's leadership right now either. It looks more than a little out of place for claw-handed, covered-in-weapons Tankor to be up in front tending to the wounded, especially if you tend to associate Tankor with the unintelligent iteration of early Beast Machines. Even for "Smart Tankor" this feels out of place-ish. But hey, different fictional universe, so this Tankor can apparently be whatever he wants to be. At least he shows up and you don't need to scan through backgrounds of crowd shots to find him. Progress!