The Lone Gunmen get an infodump from the future, and it doesn't look good. Neither does the present, judging from the pile of extremely pointy mass-deaths Mulder and Scully are presently investigating. But how do the Ghostbusters, the Transformers, the Teenage Mutant Ninja Turtles, and The Crow figure into this? The X-Files: Conspiracy is part 1 of a 6-issue crossover event written by Paul Crilley with art by John Stanisci, colors by Steven Downer, and letters by Chris Mowry. 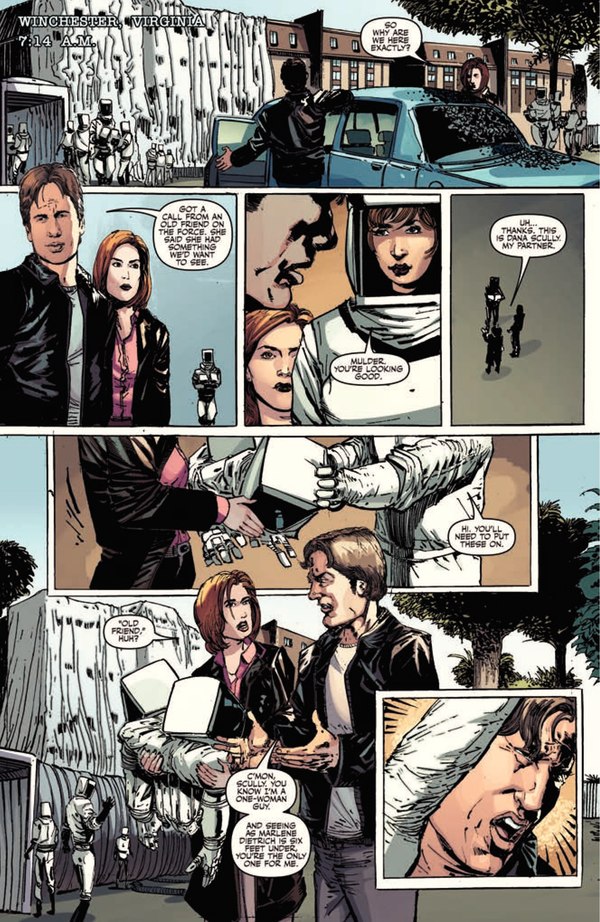 FACT: hitting David Duchovny upside the head with a radiation suit turns him into Elvis.

The Lone Gunmen (whose deaths were retconned in the X-Files Season 10 comic) are hard at work decrypting files sent to them from within CERN, the operators of the Large Hadron Collider- and all of them are news articles from the future. The key is a company named Skylogic Systems, but there are no search results for that name. That's something that shouldn't happen, according to Langly. This is all cryptic enough that the Gunmen decide they need to show it to someone. In Winchester Virginia, Someone (Fox Mulder) has been invited to see the grisly deaths of people who've been affected by some kind of virus. Whatever it is, it makes metal spikes burst forth from their bodies as though they died from some ill-considered Hellraiser cosplay. The Gunmen show up and show Mulder the photos, and fulfill their purpose in the X-Files story formula as the dudes so crazy even Mulder doesn't believe them... and then Mulder sees the same crime scene photo that he just watched being taken. They promise to keep Mulder posted and get back to work, but are accosted by two people in black suits who try to shoot them for searching for Skylogic Systems. I feel really sorry for anyone who Googled that because they were thinking about using the name.

Conspiracy is an event book, this being one of the two bookend issues that are going to be used to tie together the crossover books. Future issues of Conspiracy will feature the Transformers directly- along with the Teenage Mutant Ninja Turtles and the Ghostbusters, but of course the focus is on the X-Files and particularly the Lone Gunmen, the comic relief conspiracy-nerds that got their own series back in 2001. Which is fine by me because they were pretty much my favorite part of the X-Files, and while they don't have enough time or enough dialogue to really shine here, they're also my favorite part of this comic so far. The rest of it is pretty much what you would expect from a comic titled Conspiracy, where someone discovers a conspiracy and people don't believe them until they do, and then Sinister Forces attempt to silence the whistleblowers. One plot point I feel is oversimplified: what do you mean "every word has some sort of search result"? This is patently untrue, especially when you're dealing with made-up compound words like "Skylogic." Here, I invent a word: barfexpediting. Use it to describe things that make you throw up quickly. This review is now (as of this writing) the one and only search result for "barfexpediting." Which actually defeats my point in hindsight, but when I wrote this, the word barfexpediting did not exist, and scary people who might be Decepticons did not show up at my door trying to kill me when I searched for it.

...hold on, gotta answer the d

I'm not really familiar with John Stanisci as an artist, but he seems a good fit for an X-Files comic. The creepy, gory bits with the virus' first victims are appropriately moody, and since the entire story hangs off of the impact of the virus that's a major positive. The art style in general is one that seems to prioritize mood over technical issues. Perspective, especially on faces, gets a bit weird at times, and I'm pretty sure that certain panels have been photo-referenced. Sadly Gillian Anderson is seemingly not photo-referenced at any point and so Scully tends to look a bit generic next to Mulder. Steven Downer's colors do a good job of distinguishing scenes, though he does fall a bit too much into the Teal & Orange Color Theory trap.

Conspiracy seems like a solid X-Files comic, which honestly means it's not entirely to my tastes, but it's done well enough and it's a good setup for the crossover. The draw for non-X-Files fans is going to be the crossovers with other characters, and those begin later this month with the Ghostbusters. Transformers follow in February, then TMNT, and in March we have The Crow followed by the wrap-up issue. I think we'll have a better idea of how this is going to go once we see the Gunmen deal with the Ghostbusters, and then shortly thereafter we'll get to what will be the point for most of the people reading this review. Hopefully it'll be interesting to see how our favorite characters fare in an X-Files world.