The Lost Light crew battles the Mini-ConsAmmonites inside and outside Metroplex- and we meet Crosscut, whose action figure will come with this very comic! Dark Cybertron Chapter 7 is written by John Barber and James Roberts with art by James Raiz, Atilio Rojo, and Livio Ramondelli. Colors by Josh Perez and Ramondelli. 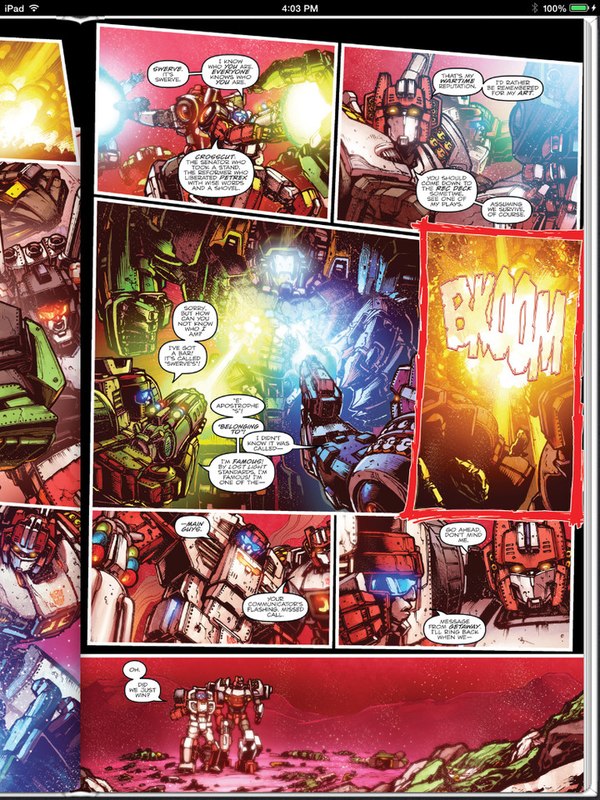 I'd complain about how blatant this is, but frankly? Seeing the toy get a proper spotlight in its pack-in issue is pretty nice!

Outside Metroplex, the battle with the Ammonites ends abruptly... because it's going to move inside, where most of the Lost Light's main crew is currently. In the Dead Universe, Nova Prime introduces Orion Pax to his Space Bridge: Kup, who was drawn into the Dead Universe in a zombie-themed crossover. On Cybertron, Galvatron insists on moving Megatron's body himself, but Galvatron's contempt for the younger generation of Transformers blinds him to the fact that for a Cybertronian, especially one like Megatron, bisected doesn't necessarily equal dead.

Technically, we're dividing the story four ways in this issue seeing as the Lost Light crew is split between what's going on inside and outside of Metroplex. (Super-technically we've split it five ways since there's a brief scene with Starscream in New Iacon, but that's short enough to not divert attention for too long.) Oddly enough for Robots in Disguise, the most pages in the issue are dedicated to the Lost Light crew: nine out of twenty-two. Thanks in a large part to a high concentration of Swerve, it's also the most enjoyable part of the issue. But that's just my MTMTE-bias talking, because the rest of the issue is fun, and brisk, and advances the story and the characters. (It's also more spoiler-intensive, which is why I'm trying to only go into deep detail with the parts seen in the preview.) Overall it feels like we've hit the tipping point in Dark Cybertron where the setup is complete even if all the consequences and motivations aren't laid bare yet, and we're starting to move towards resolution. The last page in particular sets in motion some things we've seen mentioned in solicits- both for comics and toys -and I'm interested to see how it affects this story as well as the IDW universe at large. It's a big thing, definitely!

Since this is my first time reviewing a Dark Cybertron book, I have to reiterate what ExVee's said in his reviews up to now: I like that they've largely kept things consistent with multiple artists by assigning the various artists to specific places within the universe. James Raiz in particular is growing on me, and while his unique and highly detailed style doesn't quite mesh with the tone of the Lost Light up to now, it's much better suited to this more dramatic story than it was the fill-in issue that was packed in with Skids. Atilio Rojo is kind of the odd man out here due to his relatively simple character designs- though I'd love to see Livio Ramondelli paint Rojo's linework for comparison's sake. But Rojo also shades everything in a very old-school style with more crosshatching than I've seen in a very long time. That's a time-consuming, intricate activity, and it makes me want to see some of his pages without color, just to see how much of the mood is already there before Josh Perez enhances it.

Toywatch! Speaking of pack-in issues and Skids, this issue will be the pack-in with Crosscut who is the moldmate of Skids. The introduction here is just about perfect in tone for a toy introduction, being a quick summation of the character that's practically G1 Marvel in style except that the summary's more focused on personality than special abilities or weapons. (Unless you count the shovel.) Meet Crosscut: senator, freedom fighter, playwright. A well-rounded individual that everybody knows and loves- and yet we have not seen on the Lost Light before now. In the hands of any other writers my Mary Sue Scouter would probably just have exploded, but we're talking a member of the Lost Light crew here, so it can't possibly be that simple. It's right in the name of the comic, after all. Hopefully we'll find out more as Dark Cybertron continues and More Than Meets The Eye heads into its "Season 2" arc.