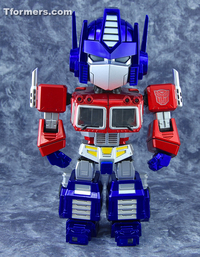 MN001 is an officially licensed, non-transforming SD action figure of G1 Optimus Prime produced by Kids Logic as a collector's item for adult fans. As you'd expect of a figure in the super-deformed style, the sculpt for MN001 Optimus is pretty stylized. You might think that it would follow the cartoon as a design model, but it seems more like the original Masterpiece Optimus Prime may have been the visual inspiration. The shapes of the shoulder and hip joints are similar, the structure of the feet, and several points on the torso all feel like call backs to that toy. That's probably the best design model to look to in order to capture the essentials of the cartoon appearance familiar to most people while including deeper mechanical detailing and complex shapes to more bring things to life. The sculptor has put himself in to the design of the figure with unique choices like the inwardly sloped wrist panels, accentuated chest windows, and very angular body lines. The final outcome is a fusion of elements of cartoon and toy with an added touch of Japanese super robot to bring it its own character. The sculpt is clean, and just simple enough to not let anything look crowded or busy while avoiding any panel being just a blank surface. It's a very elegant balance that was achieved well, a credit to the skill of the sculptor.

This Optimus feels to me more like a display piece than action figure in the standard meaning. There are a number of points of articulation, but you won't see any extreme poses with this figure. The shoulders use a soft ratchet for forward swivel with a much stiffer standard ratchet to lift out to the side. The sideways ratchet will only give you three clicks before the shape of the armor blocks further movement. That's enough to get a little less than a 45 degree lift to the side. The elbow bends 90 degrees, but with the short arms and thick forearms it probably won't really feel like it moves that far. The bicep swivel is restricted in the left arm due to electronic needs, and has a range of movement around 90 degrees. The included booklet states it should move 180 degrees and has a photo of the forearm turned mostly backwards, but the toy itself disagrees and I'm inclined to take the toy at its word rather than risk breaking a wire.

The legs are much like the arms, with restricted universal hips with a combination of ratcheting elements. The knees move a little less than 90 degrees, and bending them all the way may result in the leg armor falling off. More on that shortly. The ankles have a little range of movement, just enough to keep up with the degree the other leg joints are useful within. The torso is designed to pull up on a slide joint that will let the chest bend forward on a ball joint to what the book says is 30 degrees, or lean to the left or right about the same amount. Nice little extra to have along with a smooth turning waist joint. Finally the head swivels with a soft ratchet that can twist all the way around. As I said, this is articulation for getting a little more dynamic display posing than just being upright. This isn't made with intent to be a super-poseable action figure, just to be on a level above a statue for your shelf. As long as your expectations remain within that context the poseability will be satisfying.

There's a variety of LED lights spread over the figure. Tail lights in the toes, multiple lights in the torso, light up eyes, and even the Autobot insignia on the left shoulder which activates by pressing the logo directly. The figure takes on a very striking quality with all of the lights engaged, and even a bit more when you open the chest to reveal the now glowing Matrix within. But it also represents a bit of weakness. Instead of a central power source run throughout the body with wires or metal contacts, the lights in each part of the body are fully independent of each other. That's a benefit if all you really want to run are the toe lights, or just the chest to have the Matrix illuminated, rather than having all-or-nothing. But it also means that the figure requires a total of eighteen button cell batteries to power everything. The majority are LR60 type batteries, while the torso is powered with three LR41 batteries. I'm not certain whether either of those are commonly available in the United States, but with such a large quantity to replace it's a little bit daunting no matter what. 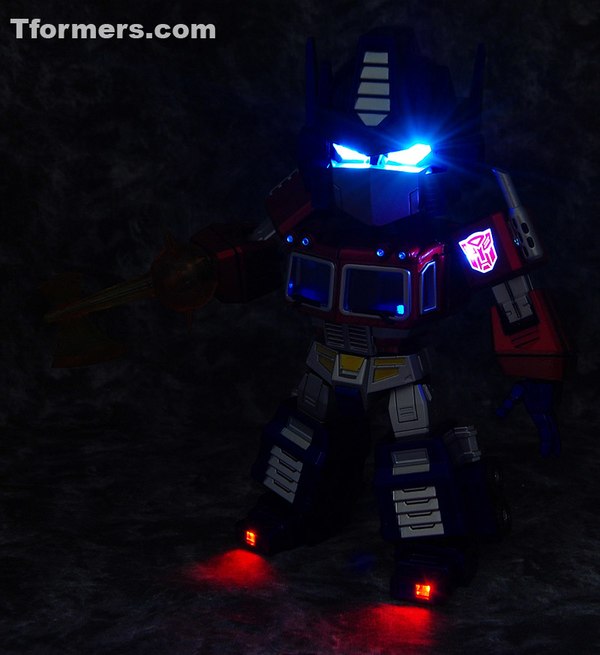 In execution, the lights are just present enough to accentuate the display appearance of the toy, of course I don't recommend leaving it lit up for extended periods. The lone exception I find is the eyes, which demonstrate a little-known special ability of Optimus prime: If you look him in the eye he will blind you. The eyes are a pair of super bright, extremely white LEDs that shine powerfully enough that you could without any exaggeration use this figure as a lantern in case of power failure. The layout of the chest lights is pretty clever for concept. There are seven LEDs in total including the one behind the Matrix which is usually hidden. Four of them are aligned to light up the fog lights on top of the chest windows, while two more blue LEDs are sat low on the chest where you can't directly see them with the chest closed. But instead they cast a blue glow inside the chamber which I'm sure must be intended to look like the glow of the Matrix spilling out. The toe lights are amusing at least, as I'd never really considered before having a figure where light-up feet might be important. But the switches are very very tiny and sunk in the soles of the feet basically flush where it's extremely difficult to manipulate them. 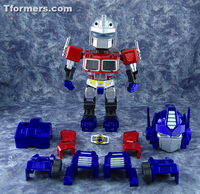 Kids Logic Optimus has several removable armor pieces. The helmet splits to reveal a frightening Optimus skull with a mesh grill in place of a mouth, and the armor of the forearms and lower legs is removable to reveal generic mechanical structural elements. The arm pieces stay on very well, but as noted above bending the knee fully can result in the back plate of the legs coming off. It does snap right back on, so it's only a mild inconvenience. The limbs with the armor off end up making the body proportions look more "normal". Aside from the still giant skull, of course. It's a neat extra, and while the legs are more detailed to the purpose of being robot skeleton parts than the arm, I do wish that a little more had been put in to all the detailing in general to make it feel more worth actually stripping down the armor.

Besides the fists attached in package, three extra hands are included. One hand to hold the rifle, and two spread, open hands. The wrist connection is a simple ball joint and swapping between the hands is smooth. Besides the hands, one extra thing is included to attach to the wrist - Optimus Prime's energon axe. It's sculpted to fit on the right wrist (if placed on the left it'll be angled really wrong), but unfortunately doesn't attach nearly as easily as the option hands. The clear plastic material probably doesn't have the same amount of give to stretch around the ball joint. Meanwhile, the sharp, pointy bits around the base also make it hard to press down effectively.

The rifle is the last electronic piece, accounting for three of the toy's eighteen batteries. A button on the butt of the rifle switches the amber light on and off, shining out of the end of the barrel and through vents on either side. The rifle is the classic Optimus blaster design at a very healthy size. The rifle also features more removable pieces, allowing the casing to be stripped away. The guts of the rifle are on the underdetailed side, unfortunately. But when taken as an alternative rifle design rather than as the inner workings, it's kinda neat.

The Matrix isn't exactly an accessory given it's inside the figure as packaged. The Matrix is far too small to be held by the figure's hands, unless you might just lay it in the palm of an open hand. It is though one of the nicest Matrix accessories I can remember ever seeing. The paint work is very clean and precise, and the crystal is sculpted with numerous facets which stand out under direct lighting and blend together otherwise, creating a complex appearance. The crystal also glows very handily with the figure's internal lighting, leaving it at its best when in place in the chest compartment.

This is a really well designed and sculpted collector item ideal as a display piece. With many options for the figure and enough useful articulation to achieve a variety of active poses, it's great as a desk toy. I'm very impressed with Kids Logic for the quality of this piece, and look forward to seeing the next release from this line. 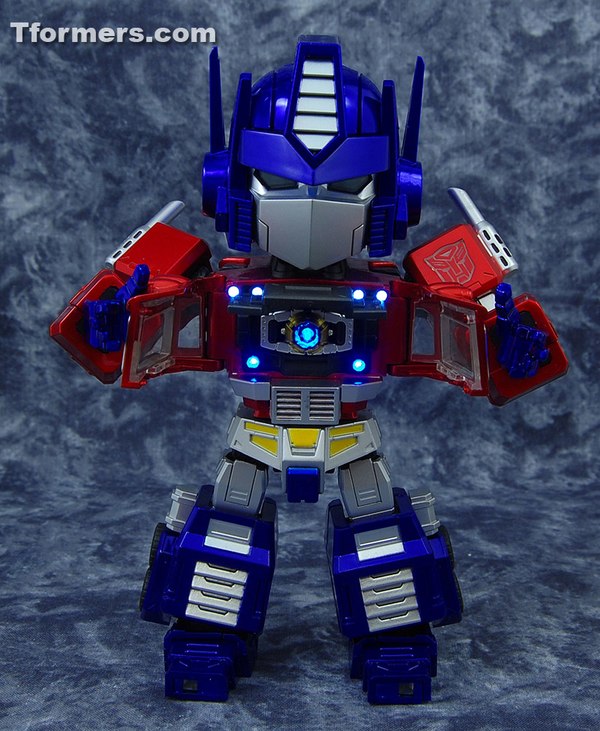 Products featured in this article were provided to TFormers.com for review.