Rodimus Prime leads a daring raid on the Hub Network! The Autobots versus a foe with vastly greater resources, strength, knowledge, and planning time... this will end well, right? "The War To End All Wars (Part Three)" is written by Simon Furman with pencils by Guido Guidi, inks by Stephen Baskerville, and colors by John-Paul Bove. 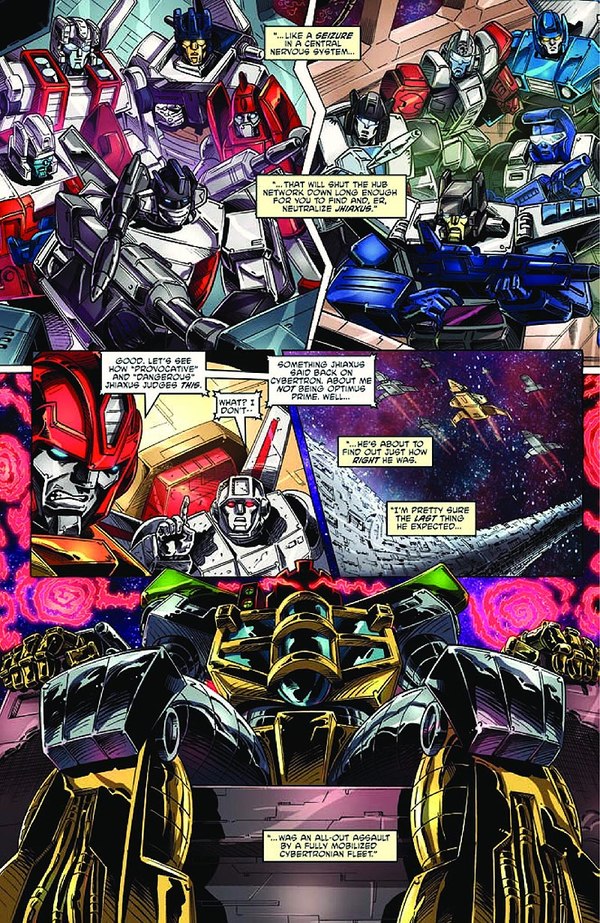 The Autobot fleet attacks a key point in the Hub Network- one that they believe could cripple the entire structure -meeting little or no resistance. Hmm. On Earth, Circuit Smasher arrives just in time to meet the first arrival through the Nebulos/Earth Chunnel, and is shocked to see Fortress Maximus come through. Fort Max grabs Spike, makes short work of Optimus Prime, and departs. The Autobots' attack succeeds, and... nothing happens. Well, not to the Hub; plenty happens to the Autobots as the second-generation Transformers carry out Jhiaxus' simple command: "Hurt them." As Ultra Magnus' ship crash-lands and he and his crew make a run for it, Jhiaxus hails Rodimus, giving him a simple choice: surrender or die.

Well, it's definitely the G1 cartoon Matrix that Rodimus retrieved from Zero Space, because the trap here is robots-in-gigantic-labcoats levels of obvious. But he carries through with it, and that goes exactly as well as you'd expect. Also, the fleet is in a combat zone, carrying out an operation... and Rodimus doesn't give the order to raise shields until it's too late. Huh? Just... huh? Fort Max speaks of one becoming all, which strikes me as a neat way to flip the usual motto on its head and thus become the motive for some kind of grand, evil scheme. This issue is still juggling three or four plot threads and showing much in the way of scheming and machinations, but we have signs that they're starting to come together at last. And since we're two issues shy of the last, I sure hope so! One odd thing: in one panel Spike's wife Linda is speaking to Gordon about her husband, talking about how much he won't talk about. But her expression is odd for the tone of the dialogue, as if her intended response was once much less reticent, much lighter. There's even motion lines, but it's not a line or a delivery that really fits for sudden movement. Last-minute dialogue change?

Guido and Baskerville are pretty consistent and deliver good art with good panel construction throughout. One odd exception is a panel where not only does Rodimus' head look off in terms of perspective, but he kind of looks like Dinobot from Beast Wars. Nobody's got a 100% execution rate but man, that looks weird. Otherwise the extremely one-sided fight between Optimus Prime and Fortress Maximus is the highlight artwise with a great panel of Prime getting blasted off his feet and generally nice staging throughout. There's also a really neat panel of Ultra Magnus transforming on the Hub Network, showing a bit of how the truck cab is contained in the armor. Nice attention to detail, as always!

I wish I'd thought to name this section Cover Roundup! earlier than 3 issues shy of the end, but it fits. Andrew Wildman's cover depicts Ultra Magnus, Kup, Bumblebee and Nightbeat on the surface of a Hub world, facing down a squadron of incoming Gen-2 Cybertronians, the world ablaze around them. It's a pretty nice image, though Jason Cardy's coloring reminds me of Dreamwave a bit much for my tastes. Guido's back to doing covers in the style I wish the book was done in, depicting Starscream amid a field of Kirby Krackle, grabbing his head in pain. Geoff Senior gives us an image of Fort Max decking Optimus Prime. Though to be totally honest it looks a little like Optimus Prime's breakdancing moves are so sweet that they've shattered his own windshields, Spike has fainted from the display of skill, and Fortress Maximus is pounding an invisible wall in frustration at losing the dance battle. It's a pretty nice image despite my willful misreading of it, and Senior draws the best images of Optimus Prime getting smashed up in my opinion, but again: Guido, man. He just has that Marvel sensibility, and I really want him to be able to do his own book entirely in the G1 style someday.

By the end of the issue we have a connection between Circuit Smasher, Dark Matrix Fort Max, and Galvatron. All that remains is Jhiaxus- who appears as though he'll have other problems next month as well. How all of it fits together and what, if anything, Rodimus Prime can do to stop it, I don't know. But we've got two months to go until we find out.