Release Data: Released in the United States in January 2014 at a retail price of US$14.99

Skywarp could use his teleportation ability to tip any battle in favor of the Decepticons. Too bad his circuits aren't sharp enough to figure out when and where he should use it. Instead of creating an unrivaled tactical advantage, it mostly gets used for harmless pranks. Betcha didn't see that coming.

Seekers! One of those few times that straight-up reuse of an unmodified mold is downright looked forward to. Also one of those times it can be a tricky prospect: from the release of Classics Starscream and Skywarp in 2006 to Thundercracker in 2011, it took five years to get the original trio assembled under the Classics banner. This time, with the superior War For/Fall of Cybertron mold, they got it done in slightly over one. Progress, to be sure. And all three were mass-market releases not specific to any single retailer this time, so that's twice the Doing It Right as far as I'm concerned. I have doubts that the Coneheads will be adapted to use this mold, so this is probably the last mass-produced quantity of this mold we'll be consuming unless Hasbro or Takara go to the obscure third-string guys with names ending in Storm.

Since I've reviewed this mold once at Figurereviews.com and ExVee has reviewed it twice here at TFormers, once for Starscream and once for Thundercracker, the purpose of this review will be to point out the differences between Skywarp and his moldmates. 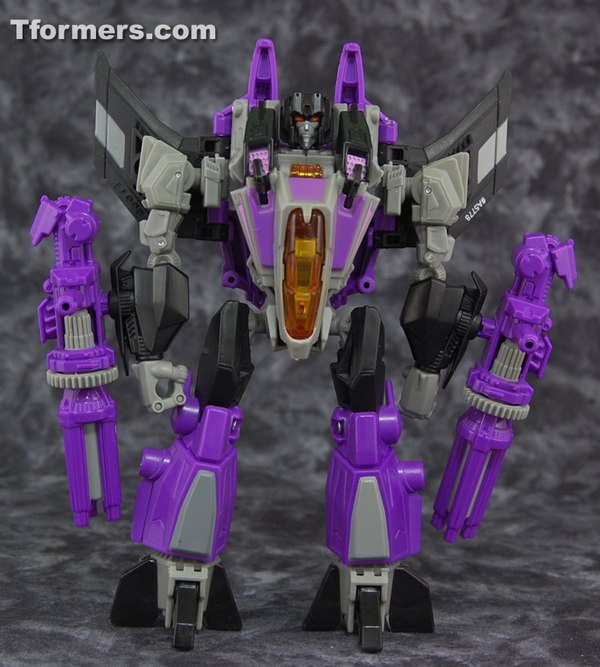 Skywarp is instantly recognizeable as the character, which is a lot more than you can say about the Takara version. His color scheme doesn't exactly match his in-game model from War For Cybertron, but that was true of Starscream as well. While I don't find the color layout in Robot Mode ideal, I think it's decent. I'd have preferred more black, particularly in the arms, but again, compare to the Takara version. ExVee's using that as Generic Background Seeker.

One of the neat things about the War For Cybertron jets is that no one is exactly a palette-swap of the other. All three share aspects of their deco, but they're all unique in one way or another. I liked that about the Classics versions of the figures, and it's still very welcome to me here. (I was always slightly disappointed that Thundercracker went more traditional in his deco, but since that's the one I had as a child, not entirely so. Nostalgia will be the doom of us all.) One piece of uniqueness that I'm also a bit conflicted about is Skywarp's face, which is gray as opposed to the silver of the other two. On its own it looks fine, though standing with the other two he looks a bit off. Of course not being bright as the other two is pretty much part of his character. Otherwise he looks fine- there's a reason black and purple are go-to Decepticon colors. Like the Classics figure before him, he uses a darker, more reddish shade of purple than the pale lavender of the original figure. Not quite as red as Classics Skywarp's though. The original color is much closer to this figure's High Moon-style running lights, which are different enough from the main shade of purple that, even if Hasbro had not taken great pains to never be painting the one shade of purple on the other, it'd be distinguishable. Starscream had the problem of his running lights fading into the red parts of his body, but Skywarp's are perfectly bright and saturated even painted on black parts. Sadly, while it's still functional and not too shabby, Skywarp possesses the weakest light-piping of the three. 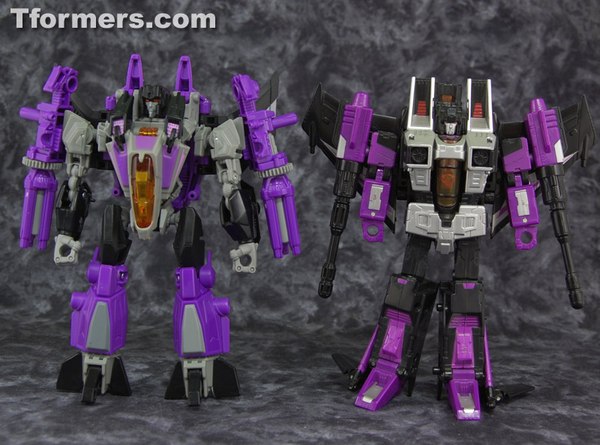 Articulation is the same Excellent level as on Starscream, but it's worth noting that for something that is at least the third use of a mold- and possibly the sixth if Takara and Hasbro used the same tooling -the joints are all as tight as though it were the first. Matter of fact, some of the joints are tighter than Starscream's. The sole exception would seem to be the knees, but marginally so; they have no problem holding the figure's weight.

Unchanged, and that's for the best. Still easy to move from jet to robot to Gerwalk to any point in-between without feeling simplistic or unsatisfying. The tightness that helps robot mode does make for some small hiccups in transformation: the vision-obscuring pylons that make the Seekers' heads look deep-set keep catching on the shoulder assembly for Skywarp. Possibly for related reasons, the tabs on the faux air-intake shoulders don't want to fit into their sockets very well. But once said pylons close over them, it's barely visible and makes little to no difference in the jet. A transformation that's simple, intuitive, fun, and has wiggle-room for minute differences in plastic tolerance: this is pretty much the goal for all Transformers in my opinion. 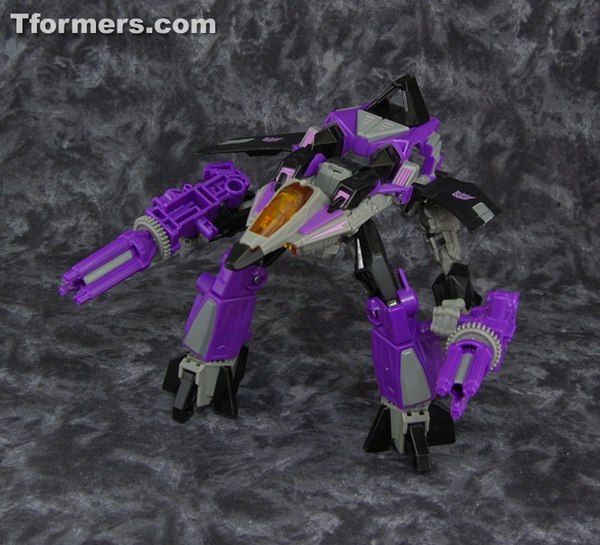 Still a G1 Cybertron jet by way of Cybertron the show, which was itself inspired by Don Figueroa's War Within design for Dreamwave. For a game of telephone in toy form, it's a nice design! The color scheme works a bit better for robot mode than for jet mode, I think: I'd have liked to see some black paint around the cockpit, even just a dab in front of the cockpit like Thundercracker has. Still, miles better than the Takara equivalent, and reads much more as Skywarp even if I would have preferred black to be the dominant color in both modes instead of neither. 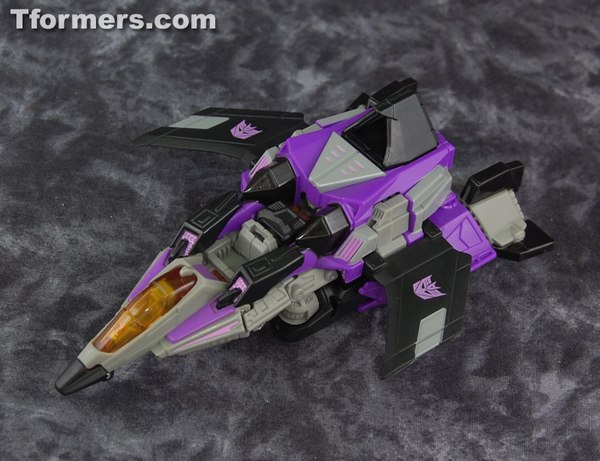 Okay, there is one point of movement on Skywarp that's significantly looser than either of the other two Seekers. Luckily, it's the spinny bits of the Neutron Assault Rifles, which finally turn as well as I'd have liked to see on the other two toys. They still combine and peg to the figure in any one of a half-dozen ways, and in replicating one of the in-game pickup weapons of Fall of Cybertron, are pretty darn neat. 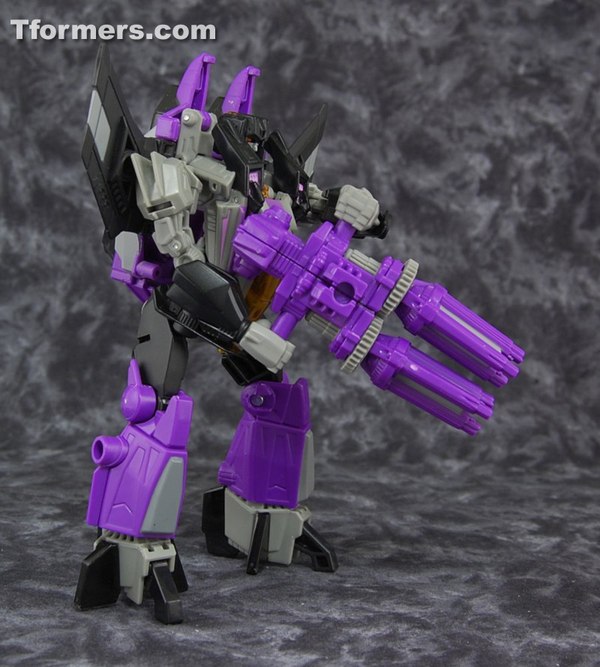 Skywarp also comes with Dark Cybertron Chapter 3. While this was originally printed as an issue of Robots in Disguise, the fine print on the inside front cover indentifies the comic the same way I have here. Skywarp is in two panels as a distant figure. But to be fair, he is dead center in both of those panels, so good for him!

As a completist (or not), you already know whether or not you need this toy, but luckily it's an especially good one. Skywarp, like his predecessors, is Excellent on the Figurereviews.com Non-Numeric Rating Scale. The mold is still great and shows few to no signs of deterioration, the color scheme is good if not what I'd consider the quintessential Skywarp, and his accessory works slightly better now in my opinion. He may not appear much in his own comic, but considering the strength of the toy, he really doesn't need to. 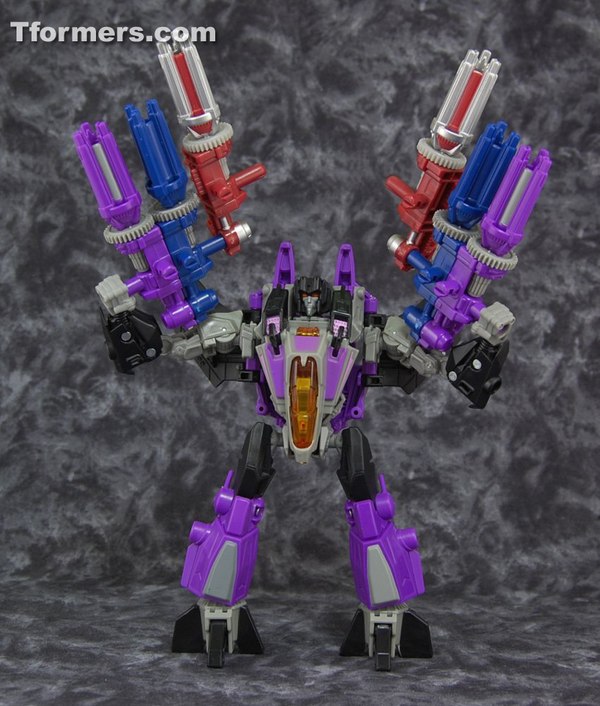