The survivors of Iacon rally against the Necrotitan as it destroys the city, while inside Metroplex the crew of the Lost Light find unexpected allies. Burning Bright, Chapter 8 of Dark Cybertron. Written by James Roberts and John Barber, art by Atilio Rojo, James Raiz, and Livio Ramondelli, with colors by Josh Perez and Livio Ramondelli.

Carried by Bumblebee back to Iacon, Megatron sees once again that the people of Cybertron need to be delivered from an oppressor, as it was when he began his war millions of years ago. Rattrap has brought Prowl and Soundwave's survivors to Starscream where Prowl asserts control and begins directing operations to protect the civilians and counterattack against the Necrotitan. Pax's team stage a jail break in the Dead Universe to retrieve Kup, forcing a direct confrontation with Nova Prime. Meanwhile in the shoulders of Metroplex, the dying Titan's caretakers reveal he is slowly dying. But Magnus believes there may be a way to get Metroplex and the Lost Light's crew back home... 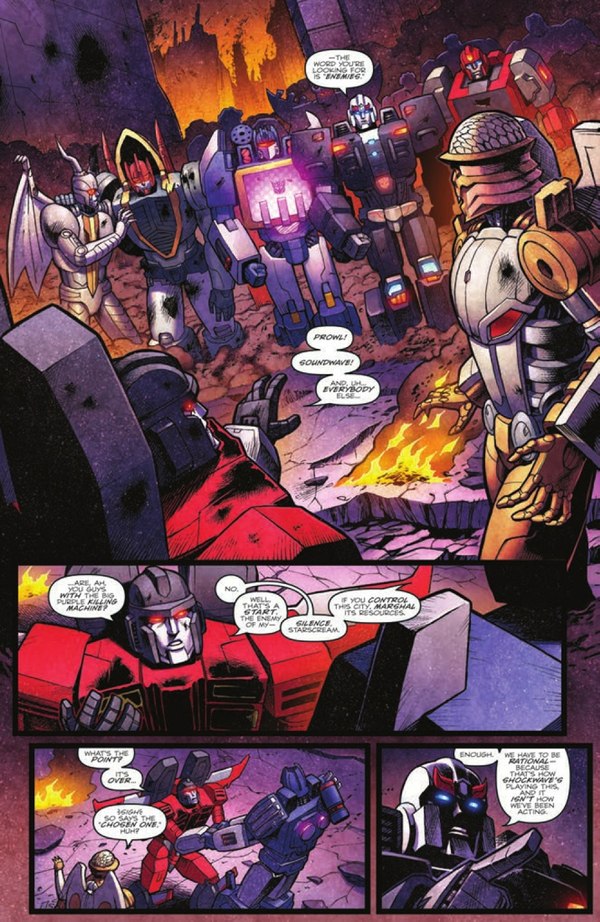 While I think many people might focus on the female Autobots this issue and trying to figure out exactly what they represent in this universe that previously was said not to have them naturally, I was paying a bit more attention to Megatron. IDW's Megatron was at the start of his history trying to put down a government that horribly oppressed the people under it. But Megatron lost that sense of purpose, as is even directly called out in this issue. I think we're seeing now that Megatron is finding that motivation again and is much less concerned about seizing control of the planet for himself than he is saving the people in the path of Shockwave's destruction. Given what we've seen of a post-Dark Cybertron MTMTE cover, Megatron may be in for a very interesting character arc over these remaining few issues of the crossover.

In general this issue feels like the all at once turning point for the storyline. After the first few issues the story structure adjusted some and started getting good, but Chapter 8 is appearing to tie off anything that might still be sitting in a holding pattern and getting everything in play. The Dead Universe has needed that desperately for several issues and I hope so very much that we've moved beyond the talking heads stage of that piece of the story, as that has been the remaining writing element that has dragged a lot of my opinion down. It was great this issue to see Prowl being Prowl again, taking control and coordinating every resource available to start to mount operations against the Necrotitan's attack. It's a huge leap back to form for Prowl who's been standing around being pretty much useless for a good ten issues so far. It's not the really interesting Prowl that turned out to be mind-controlled, but this'll do just fine. Let's keep him at this point. Metroplex spends his final issue as a setting, with his occupants giving little relevant information about themselves (aside from just raising greater curiosity from the other characters and probably even the readers), but explaining why Metroplex is on the ocean world and in such a bad state. Like everything else is going, Metroplex gets more directly involved after this point, so nothing is being left standing still anymore.

Artwise there's not much new to talk about. I'm getting pretty used to Raiz at this point, and aside from a spot here or there where it took a minute to figure out whose face was supposed to be in close up, he's been doing pretty good. With some of his quirks toned down a little since he started on MTMTE 22, the readability has improved a lot, and he's probably the best all around artist among the regular Dark Cybertron team. Ramondelli had some kind of questionable panels, particularly the really important splash taking up most of the last page of Dead Universe story for this issue where the structural challenges of the robots were very clear. Rojo's simplistic style is working against important parts of what's going on. When the Necrotitan is supposed to be utterly huge, the tallest thing among the city's structures, that sense of scale is completely lost when its drawn with no greater amount of detail than Prowl or Starscream. Even in close up, there's nothing about how it's being drawn to give an independent idea of how much more gigantic it's meant to be than any average Transformer. It reminds me a lot of season 3 of the cartoon when Metroplex and Trypticon would fight but their character models were so simplified and the fights always happened in a desert or otherwise where there were no points of reference, so they never looked gigantic like they were supposed to be. And once again, this shortfall is felt the most in splash pages that are supposed to deliver an impact but just fall short of the intention.

Toywatch! This month we have a trickier one. The subscription variant cover is of Tailgate, showing probably the card art for the Legends toy just like Swerve's art appeared a few issues back. The retailer incentive cover shows Chromia, Nautica, and Windblade. Most likely this will be Windblade's pack in comic, since that toy will ship in a wave sooner than Chromia. Though until we see Chromia's toy, I'm wondering if the Chromia on the cover is toy based and this issue might also serve as her toy's included comic. It would be a bit odd, but if this is Windblade's cover, it's already odd to me to throw on an extra character that'll get another cover feature soon enough anyway. There's enough of all parties involved though to make this justifiable whatever way it runs, so it's still better than Skywarp and Rattrap!