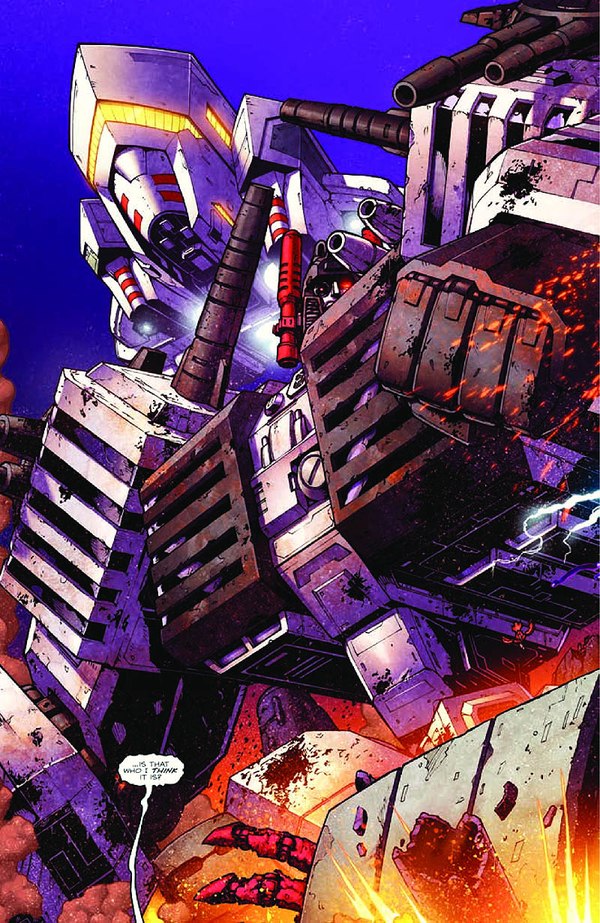 All hope appears lost in the face of the unstoppable Necrotitan, until Metroplex materializes and the Lost Light comes crashing behind him. But there's little time for reunion as the battle between the two Titans rages, threatening everyone in the ruins of Iacon. In the Dead Universe, Orion Pax is confronted by Nova assuming the image of subsequent Primes as he tries to turn Pax to his side, while Rodimus tries to convince him that the title of Prime still means something because Optimus Prime gave it true meaning. Back in Iacon, having learned of the relic of Metroplex aboard the Lost Light, Megatron sets off on a last ditch attempt to bring down the Necrotitan...

And with this, Optimus Prime returns to IDW. Not that anyone in-universe really accepted he stopped being Optimus Prime anyway. It was an interesting direction to take at the time, having Optimus give up his title and set off on his own, but it has long seem like the opportunities that presented in story telling were not utilized to their full potential, especially when the gears shifted behind the scenes and the Orion Pax side story turned in to part of the lead-in for this event instead of having freedom to move and find its own path forward. The process of convincing Pax to become Prime again was worked pretty well here though. Even with that result being kind of obvious it didn't feel like a forced moment, and I could get from it that Optimus had worked through the things that made him take the journey he started two years ago and was ready to get back to business.

I'm gonna go on written record here and say that I really really want to see the Bumblebee/Megatron buddy adventure movie right now. The two of them are a little bit amazing the way they're being written right now in being forced to work together, and I would like to see a whole thing focused on this dynamic that's being developed with them. Going back to the previous review's comments on Megatron's direction, that's being upheld for me, and the story is making determined points of trying to show that Megatron has more going on inside with his motivations than things like his recent attempted takeover of Iacon would tend to make one believe. It's presented really bluntly that Megatron would have a perfect opportunity to flee and gather his loyalists for a return to topple Shockwave's plan and install his Decepticon rule if that was what he wanted to do. When you do consider that within the story this is at most two or three days after Megatron came back and tried to take over, the shift in his own mindset seems pretty abrupt, and there's no real getting around that. But it's not unrealistic. Disastrous situations beyond your power are a quick way to get your priorities changed around and maybe see that there's bigger stuff than your own ends to consider. And I really like that Megatron is going through this and will at least for a while (because what is ever really permanent in comic books?) probably end up a reasonably changed individual when it's all over with. It's the complexity of motivation and responses to changing situations over times in ways that are really relatable and believable that makes these characters feel that much more real in the hands of these writers.

Back on art this month is Andrew Griffith, last seen way back on Dark Cybertron Chapter 1. The main positive is that he does a lot of justice to the battle of two Titans. The fight panels between them carry that sense of scale and mass that you just absolutely need to be able to get across in your lines to make such a thing work at all. One panel with Metroplex's hand falling and seen from a ground level point of view just so readily presents the idea that this is a building-sized extremity, and would do so even without a bunch of tiny robots trying to get out of the way of being crushed beneath it. There's not a BUNCH of panels focused on the Titans fighting each other, but there are some really really nice ones among the panels we do see it. Of course the weird thing to me is that I've gotten so used to James Raiz's take on the MTMTE cast that seeing them here in Griffith's style ended up being really jarring, especially for Hound who got a good bit of focus time under both artists and looks extremely different in each case. But overall, the art on Cybertron was very welcome in this chapter, with everyone having appropriately complex shapes and a good bit of detailing. I'm not sure off the top of my head what the art situation is supposed to be for the next chapter, but even if this was a one-off for Griffith to be back it was fun and came at exactly the right place in the story for the visual level required. I'll just say "good planning" on the production side for choice of where to utilize the artists. Ramondelli's Dead Universe has actually a few pretty decent looking panels in composition and how the figures are rendered. But the action panels are still not great and are mostly just hard to follow the action through when there's anyone but Optimus and Nova involved. It was very very difficult to work out who was being beaten at any given time unless someone actually called out a name in dialogue. But maybe at this point we can just hope for a return to standing around and talking heads since that's a lot easier to keep up with in this style.

Toywatch! ...actually, I have no idea. The subscription variant cover is Whirl's boxart, which doesn't apply for pack-in comic purposes, and the retailer incentive is a Ramondelli piece with the fighting Titans. Nobody we know of with toys coming up really gets focus time either, so I'm thinking this might end up being a random assignment with packaging cover art we haven't seen yet. So, check back next month for the next thrilling installment of Toywatch?