Monstrosity returns in motion comic form! Trapped in the bowels of Trypticon, Megatron and Grimlock are forced to work together to survive as the Autobots try to stop the monster from the outside. "Belly of the Beast" is written by Chris Metzen and Flint Dille with art by Livio Ramondelli, lettering by Robbie Robbins and built by Micha Ritchie and Chistopher Hampson. 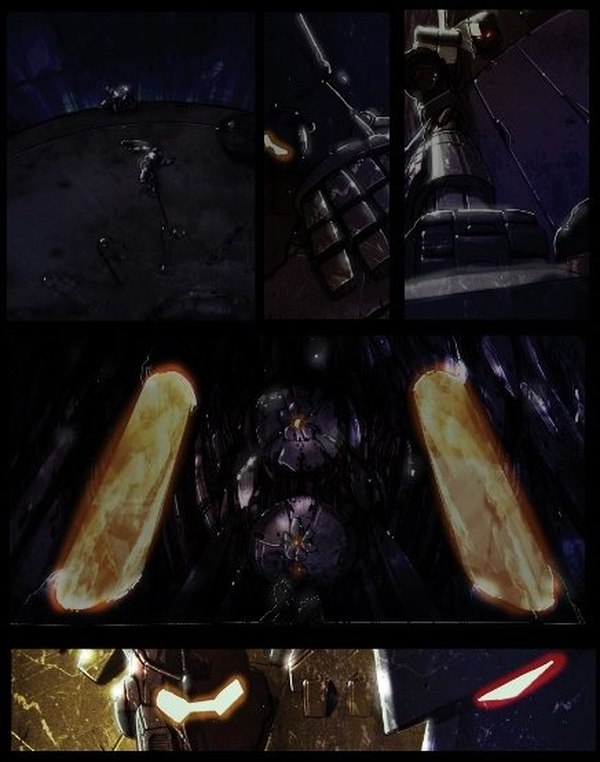 Nice to have a glimpse of the artwork sans dialogue, though!

Since I've covered this material in the review of Monstrosity's print edition, this review will cover the changes made to the material for the motion comic format. Also, it's worth mentioning that this is my first encounter with that format.

The panels are reworked and realigned in order to optimize the artwork for smartphone and tablet displays. Likewise the interface is designed to advance (or rewind) the story with simple taps. Increments may be a shift from panel to panel, or possibly simply a change in the dialogue of the current panel. While other installments of Madefire's motion comics also include sound, viewings on multiple platforms have not given me any sound effects for this chapter.

Overall, the effect is good but not great. The motion effects generally act as transitions, with the artwork kind of "settling" into the original format. While this is respectful of the integrity of the original artwork, and even gives a brief glimpse of the artwork without dialogue balloons in the way, I feel as though more could be done with the format. Flying Decepticons slide into place in a panel as though they were moving, but once the image is complete onscreen they are completely static; I feel as though a slight hovering effect would have been a nice touch here. Likewise, the panel of Trypticon falling over seems like it would be a great place to use motion as opposed to leaving him hanging in midair as per the original art. I understand that there must be limits as to what can be modified, but it seems like they're a little bit timid about taking the effects too far. The one effect that is neat is that sliding the cursor/your finger over the cover of the comic will move the figures on the cover all together, shifting as though the viewer's perspective was changing slightly. I like that! I'd like to see more such effects throughout.

For those of us who are so old as to still think of viewing comic books on a screen as a substitute for print copies, this format may not be ideal. And overall, I feel as though in trying to respect the original art the creators of the motion comic may not have taken the effects far enough. At a suggested price of 1.99, each installment of Monstrosity will cost you double what the standard digital installments do, and I don't feel as though the effects and formatting were worth it to me. To justify double the price would require the new product to go farther with its adaptation. More animation, more sound effects, or possibly the option to view all the art with no dialogue, would all be a welcome bonus.

However, it should be noted that this is optimized for tablet and smartphones, and the two machines I read it on were a desktop and a laptop PC. If you're looking for a copy of Monstrosity you can take with you on your iPad or other such device, this format seems very tablet-friendly and may well prove the optimal way to read your Transformers comics on the go. But if you're only looking to own one version of Monstrosity, I don't think this will be replacing the static version.