The greatly anticipated second season of Transformers Rescue Bots is about to begin, and we were given an early look at the first two episodes "Road Trip" and "Sky Forest", scheduled to premiere March 1st on The Hub Network! 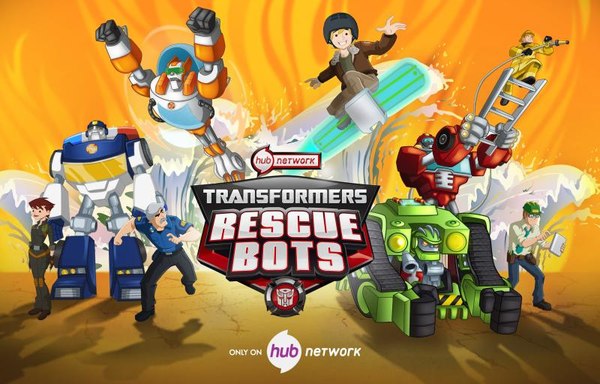 In "Road Trip" Cody is feeling left out while the Rescue Bots are occupied with new activities with Frankie and Doc Greene, and bringing the new Mobile Headquarters vehicle up to operating status. But one of Doc Greene's new inventions malfunctions, and while the Bots are out on a rescue mission it has an unexpected interaction with the Mobile Headquarters, sending it teleporting seemingly at random with Cody trapped inside.

In "Sky Forest", Cody and Frankie are divided over what idea to develop and enter in the town's inventor competition, leading them to enter their ideas separately. When Frankie's entry wins over Cody's, the Bots become confused at the two friends now suddenly seeming to be adversaries, while Cody is just disappointed and wants a chance to congratulate Frankie who has become too busy with the full scale development of her invention. But when the tower's rainforest begins to grow out of control, the entire town is endangered. 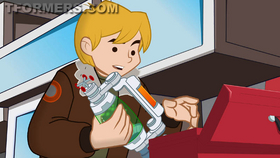 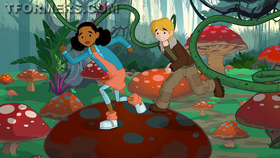 If you've never taken any time to see any of Rescue Bots, you might be surprised by the general level of quality it holds. While the plots are very simple to be accessible to the very young target audience, the writing is still smart enough to amuse the adults who would be watching with their children. It's a hallmark of shows where the writing staff cares deeply about the work they're doing, and Rescue Bots has that in plenty. What I appreciated watching these episodes was how the show doesn't feel like it's talking down to the intended audience in any respect. While you can find the moral lessons typical of this style of programming, it's never heavy-handed or felt to be forced in. "Road Trip" seems to have the purpose of showing that even while your friends might make new friends and spend some time with them, that doesn't mean they stop caring about you, but none of that is really said through dialogue. Even Cody's clear feelings of being left out are limited to the first act or two before the peril of the story sets in and everyone is correctly focused on that instead. The resolution comes with Cody getting to be included again when he helps to figure out the cause of the situation and resolve it. Likewise, "Sky Forest" has a reasonably complex lesson about keeping competition friendly and being happy for others even if you're disappointed at not winning. And it's showing in the end that everyone has something valuable to contribute. Teaching these lessons by example instead of having them just be outright stated at the end of the episode shows a level of respect for the target demographic that I appreciate very much.

I know the visual style has been a factor that puts some people off from giving Rescue Bots a chance, and it does take a little bit of getting used to. But I was impressed by the smoothness of movements and how consistent all the characters are able to look in this process. I don't know that I would want to see this in everything 2D animated, but it works really nicely here, especially compared to some other art styles Transformers has seen over the years. There are very evident stock animation elements which may become a little repetitive for older viewers, but they take care to try to have them blend in as much as they can to minimize their visibility and integrate with what's going on. It's very much a case of not letting yourself be fooled by stills and screengrabs. The animation is much more quality than can be conveyed by static images.

The voice acting is top notch as well with really solid casting in all roles. The performances of the actors make it feel like they all really enjoy and are invested in the work for the show. All the character voices seem to fit so perfectly, it makes all of the characters come to life so much more. Having the voice talent to bring really strong scripts to life is not always easily accomplished, especially for Transformers. It's great to have everyone putting themselves in this so much, and it makes it so much easier to become involved with the stories and care about what's happening.

I know the existing fans of Rescue Bots, both young and old will be very excited for the start of the new season, but if you've never stopped to give the show a try, this would be a great time to check it out. I think you may be surprised just how enjoyable it can be. "Road Trip" and "Sky Forest" will premiere back to back on the morning of March 1st on the Hub. Don't miss it!