A captive of Jhiaxus on the Hub Network's Throneworld, Rodimus Prime is helpless before the Second Generation Cybertronians. Luckily, the Wreckers aren't- and neither is the Underbase, which is currently wearing Starscream. There's always a bigger fish. "The War To End All Wars (Part Four)" is written by Simon Furman with pencils by Guido Guidi, inks by Stephen Baskerville, and colors by John-Paul Bove. 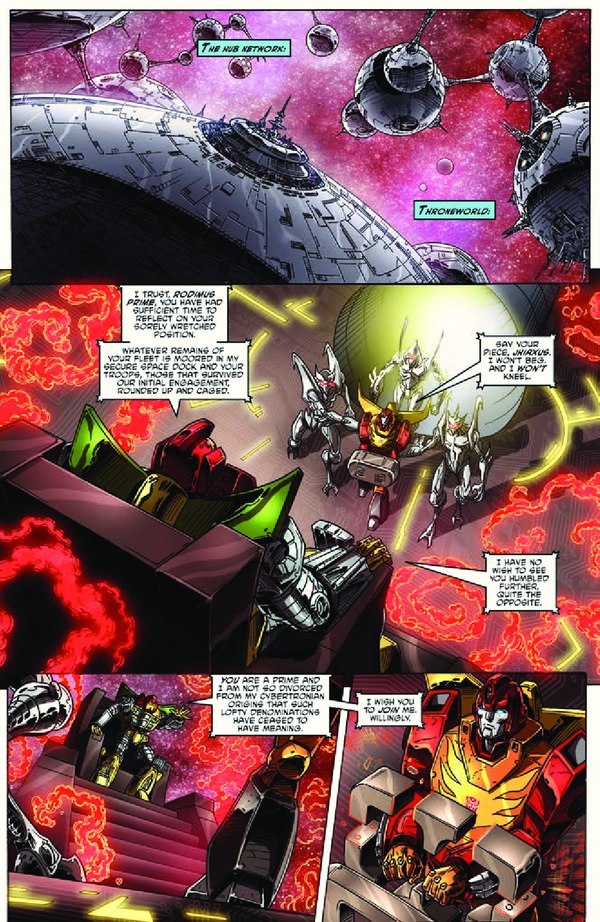 "And nothing says 'rational, freely made, informed decision' like threatening to murder everyone you've ever known if you refuse!"

Trapped in Zero Space, Spike "Circuit Smasher" Witwicky is being taunted by the Last Boss of Regeneration One with visions of his dead brother Buster. As a place where human, Cybertronian and Nebulan sciences converge, Buster is key to the Last Boss' entrance into the multiverse. Back in the real world, Rodimus Prime is ordered to submit to Jhiaxus or watch his soldiers die. Unfortunately, the choice is taken out of either of their hands by the Wreckers, who have been ordered in by Kup without Rodimus' consent. Despite the fact that they seem to be succeeding where the entire rest of the Autobot forces could not, Rodimus has a problem with this. Elsewhere, Starscream's body has been occupied by the Underbase entity, which seeks out Jhiaxus to complete itself, and Shockwave attacks a Hub world using his own firepower and that of his other self, the Ark. On Earth, Circuit Smasher's wife readies a raid on Nebulos to get her husband back, and on Cybertron, the Star Chamber is attacked by a Dark Matrix-infected Galvatron.

The Jhiaxus/Hub Network storyline ends abruptly in this issue. One of the biggest failings of ReGeneration One has been that it has always been unable to decide whether it's episodic or simply parts of a larger story. By episodic, I mean that stories are self-contained with a beginning, middle and end, even if those stories all work towards a larger plot or ending. It feels as though ReGen One wants to be this, yet it's always pushing towards the next story, the end result being that neither the overarching plot nor the individual storylines nor the individual issues feel satisfying when taken in those portions. Amazingly, with a single issue left after this one, we managed to squeeze in one more such anticlimax. I had assumed that Jhiaxus and the Hub were going to figure directly into the final story because of how things were structured and how the Zero Space portents were presented, and the book's pacing has always felt as though it was meant for all points to converge into a single, messy, entertaining conflict. It yet may, but the introduction of the Hub and the Second-Generation Transformers at this point feels more than a little pointless.

Additionally, I'd like to point out that this storyline has only been the focus, such as it is is, for three issues. This is material more or less adapted from the 12-issue Generation 2 series and to a certain extent the Alignment story which served as Furman's unofficial resolution of what was supposed to be G2's second year. That took up 3 issues of this book, with the Dark Matrix subplot running in the background. (Again, for as much as the book distinguishes between background and foreground and plot and subplot.) What this basically means is that the final confrontation, whatever it may be, is all going to be squished into one last issue. All the setup for it has been happening in obtuse, inorganic ways and there's still much we don't know about what the Last Boss is, though we are finally getting an idea of what it wants. Basically: He is Vigo! He needs a way into our universe (or possibly multiverse), and it looks like Spike will probably be the medium for that to happen. Why it wants to do that and what it intends to do once it gets here will be revealed next issue, or not at all.

There's little to say about the art team and the excellent job they do that I haven't already, save that I like the decision to add a lot of extra detail to Underbase-Starscream to give him a distinctive physical appearance above and beyond his Super Saiyan glow. So let's go straight to Cover Roundup! Wildman's cover, which depicts Underscream bearing down on a helpless Jhiaxus, shows the reverse of how Starscream's glow works in-comic, with the new panel lines being the Tronish source of the glow as opposed to simply more detail. I like that! Guido's cover is far and away the most striking, showing a version of a Dark Matrix-tainted Galvatron closeup that is nowhere near this impressive inside the comic. It's clearly in the Marvel G1 style, but if he's channeling a specific artist here I'm unsure who. It doesn't matter; it's gorgeous. Give Guido his own book, please. Geoff Senior's cover is a typically solid composition of the reconstituted Shockwave in combat on the surface of a Hub world. As is becoming more common Guido takes the cover gold here, but once again all three covers are strong.

The Hub is no more, and Circuit Smasher is in the hands of the Last Boss. Next issue we find out exactly what that boss is, what it wants, and what Rodimus Prime can do about it. There are some remaining variables to hash out, and one issue left to do it. The book now has no maneuvering room left and will be forced to live in the present; I'm hard-pressed to see how it will manage it, but we'll find out in March.