Ratchet is missing! The Autobots have one clue to his whereabouts: "Skylogic." But the Lone Gunmen are on the trail of Skylogic as well- can the Autobots and the Gunmen work together to save Ratchet and stop the mysterious virus tearing people apart? The X-Files Conspiracy: The Transformers is part 1 of a 6-issue crossover event written by Paul Crilley with art by Dheeraj Verma, colors by Joana Lafuente, letters by Chris Mowry, and edits by John Barber and Denton J. Tipton. 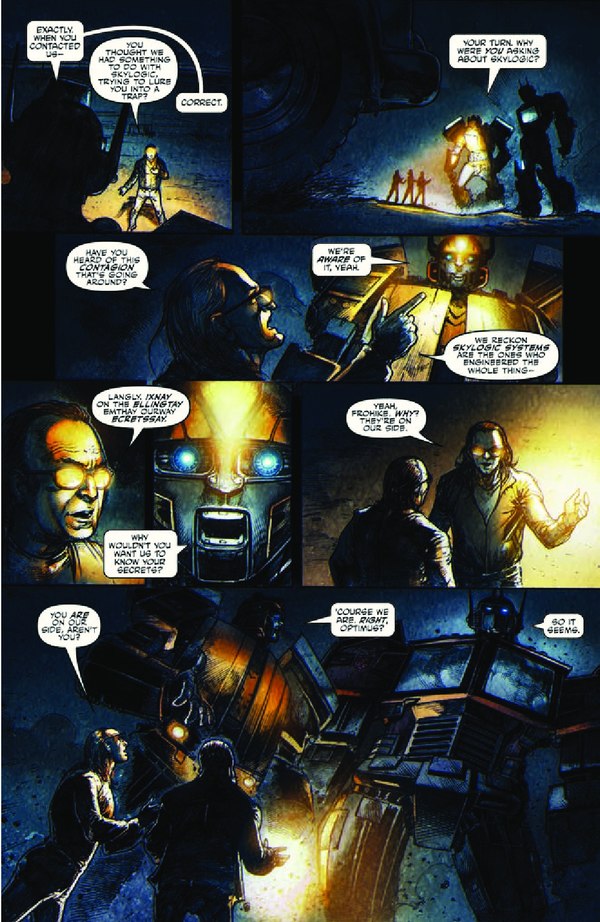 The Lone Gunmen wait in the dark for a forum contact who has information about the Skylogic virus, but instead are met by Optimus Prime and Bumblebee. They are looking for their comrade Ratchet, who managed to transmit the word "Skylogic" before he vanished. Information is exchanged! Prime has the good computers they use on CSI and is able to enhance grainy security video to an impossible extent, and the Gunmen are able to identify someone who knows about the virus. The man in question, Dr. Simmons, explains that the virus was created to combat human-Transformer hybrids bent on world conquest and genocide... but it was imperfect, and it killed ordinary human beings. Someone is about to use it again, and it's extremely unlikely that the virus has been perfected in such a short time...

While I didn't read the Ghostbusters issue between Conspiracy #1 and this issue, it's not at all difficult to pick up and carry on from that framing issue. The Transformers here are very likely not in continuity with the rest of IDW's books, which is fine. The meeting between the Autobots and the Gunmen is slightly reminiscent of Sam's first encounter with Optimus Prime in the 2007 Transformers movie- as is the odd, odd face on Bumblebee, who otherwise is using his recent Generations Deluxe body. Ratchet, meantime, is Transformers Prime Ratchet, so yeah. The rest of the book is a fairly straightforward infiltration/rescue mission that features some bonding between Bumblebee and Langly. ("Ninja Buddies Forever!") It's pretty well done and reads like a very compressed version of the opening episode/story of a classic Transformers comic or film or animated series. Most importantly, it has the episodic thing down, being both a satisfying self-contained issue and important part of the larger crossover. It's a nice, light issue, which makes it an excellent palate-cleanser in comparison to the heavy goings-on over in ReGen One and Dark Cybertron.

Weird Bumblebee face aside, this issue marks the return of the art team of Dheeraj Verma and Joana Lafuente, who were such a breath of fresh air on Robots In Disguise #19 (Waspinator's pack-in comic) in the lead-up to Dark Cybertron. All of the same strengths are on display here, with Verma's excellent linework and Lafuente's painterly, mood-enhancing colors. Those colors are in a distinctly X-Files mode here, with lots of blue and green to reflect the gloomy and clandestine nature of that series. And as for that Bumblebee face, it even kind of grew on me- I thought back in RID #19 that Verma's style reminded me of some of the attractively off-model Transformers children's books of my youth, and Bumblebee is very much in that vein.

So in short: great art, pretty good story. I don't know that I'll be sticking with Conspiracy now that the Transformers' role in the book is over and done with, but this was a decent self-contained issue that I think treats both the Lone Gunmen and the Transformers well. John Barber is listed as having done some edits on this book, and I can only think that input from a writer and editor intimately familiar with the characters helped the outcome. At the same time, you're not going to have any trouble following it whether or not you've been following IDW's X-Files or Transformers comics- in fact I think it may be best appreciated by casual readers and new readers, and there's not a thing wrong with that.