With the battle won, the victorious Cybertronians take advantage of a needed down time to salvage their injured and reconnect with friends thought lost. The rules are beginning to change, but will the growing unity brought about by Shockwave's failed machinations be enough to survive what comes next? "The Becoming", Dark Cybertron Chapter 10, written by James Roberts and John Barber, art by Alex Milne, Brendan Cahill, and Livio Ramondelli, and additional inks by Brian Shearer, with colors by Josh Perez and Livio Ramondelli. 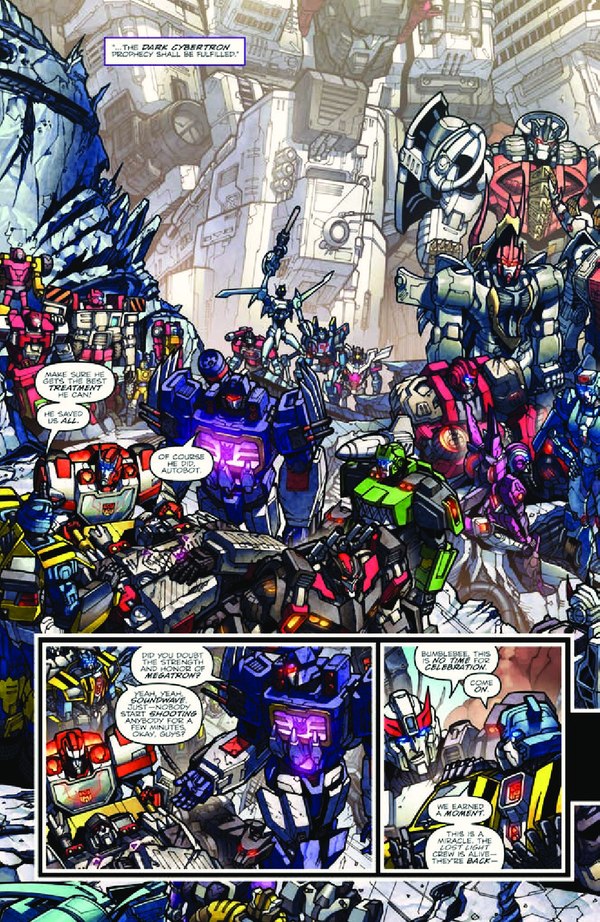 Prowl was a lot more fun when he was Bombshell.

The Necrotitan is destroyed, and those afflicted by the plague it spread have been cured thanks to Metroplex - and Megatron. For the moment a peace, albeit tense, has fallen over the Autobots and Decepticons who now work together towards repairing the injured and picking up the pieces in Iacon. Optimus Prime and the remainder of his team are stranded in the Dead Universe as the rift they entered through has reduced to little more than a pinhole in the likewise shrinking reality. Kup is willing to sacrifice himself to send the others home, but the debate is interrupted as the distant sound of singing voices can strangely be heard... Meanwhile, Shockwave explains to Galvatron that his plans are not so different from those of Nova, a universe made to serve Cybertron as the highest form of civilization, he simply has a different means of accomplishing that goal.

It's the fanservice issue! In another context this would surely involve a trip to a hot springs or a beach, but for our purposes the fanservice is having the main cast from both books getting a chance to sit down and interact without the looming threat of death. At least mostly - but more on that bit with Chapter 11. Megatron's shift of motive carries on, as he realizes that he really lost his war a very long time ago and Starscream of all people actually got it right. This hardly impresses Ratchet or Bumblebee, but even Prowl can't deny that Megatron is responsible for saving the day when he could have just as easily left everyone to be killed. This direction change has become one of the most interesting to read aspects of Dark Cybertron, probably helped some by knowing the vague strokes of its outcome in advance and then being able to see how we convincingly get to that end point. It's in the favor of this development that two days of in-universe time has become most of a year. If we watched it happen as fast as it is in the story's timeline I don't think it would be quite as easy to accept. There's a lot of nice character interaction moments, some paying off from as far back as the first issue of MTMTE. While we don't really get anything as amazing as Arcee and Whirl on the main cover, there's a lot to offer for long term fans of both series. Swerve's bar stands as a second Maccadam's with cast from both books, Autobot and Decepticon alike gathering to drink and relax. Or have a bit of an aneurysm in Swerve's case.

Shockwave's actual plans are laid out and make some better sense, even as far as why the Necrotitan was needed. Though not without some contrivance, as the realization of this plan hinged on a few actions that Shockwave might have been able to calculate to a high probability, but were still beyond his control or direct influence and would have disrupted everything else if they didn't happen anyway. But getting down to the actual intent, Shockwave at least finally has some solid endgame, which has been really lacking thus far in what appeared like random movements with no sense or purpose to be had. ...and some of it sort of still does, I'm not going to lie. But what we get with this issue at least feels appropriate for the scope of the crossover and with Shockwave being behind it and having been working towards it practically forever. Much like we got character interaction payoffs for most of this issue, we're finally getting let in on Shockwave's secret plan and getting rewarded for sticking with the many issues of evident aimlessness. I'm so glad this has picked up to the degree it has even if it took moving toward the final few issues to get there.

Scoring high on everyone's lists I expect is the return of Alex Milne to the art. Alongside brendan Cahill, occasional fill-in on Robots in Disguise and contributor to one MTMTE issue previously, the art was in very good hands for this issue. A lovely two page splash with more or less the entire main and secondary cast of both books drawn by Milne is a highlight that colorist Josh Perez has even posted the process stages for on his own blog. Similarly, Cahill got the chance to show the gang at Swerve's in another excellent full-page piece. There's so stumbling between these two. Even though their character design styles are distinct from each other, they don't clash and interrupt the flow from page to page. The only thing I haven't worked out is how the work was spread between them. Scenes that focus on characters from one book or the other aren't always handled by one artist or another, and it's difficult to discern a pattern or reasoning to why one person worked on a given portion. Not that either one is a bad choice for any of this, it's just one of those things that I want to understand the inner workings of and can't figure out myself. Meanwhile, Ramondelli continues to render the Dead Universe, which continues to appear dark, muddy and mostly dominated by one color wherever we go. Hopefully we - I mean they - will be escaping in short order so they can once again exist in a universe of diverse colors and functional spatial relationships.

Toywatch! Sky-Byte is our boxart representative on an alternate cover, but as a Voyager he won't be coming with a comic book. Arcee got a decent spot of focus in this issue though, so that would be my guess out of anyone remaining that this might come with. Admittedly in the last few weeks the whole Toywatch thing has kind of broken down with the absence of Deluxe toy package art obviously appearing as covers. Remains to be seen I suppose whether Chapters 11 or 12 will steer back in that direction or if we're done with that feature altogether by this point.