IT’S OVER - Rodimus Prime stands the last line of defense as the ultimate darkness stands poised to pass through the walls of reality. But at what price can all of creation be saved, and is Rodimus Prime willing to make the greatest sacrifice? Transformers: ReGeneration One #100 is written by Simon Furman, with art by Andrew Wildman, Geoff Senior, and Guido Guidi, with inks by Stephen Baskerville and colors by John-Paul Bove. 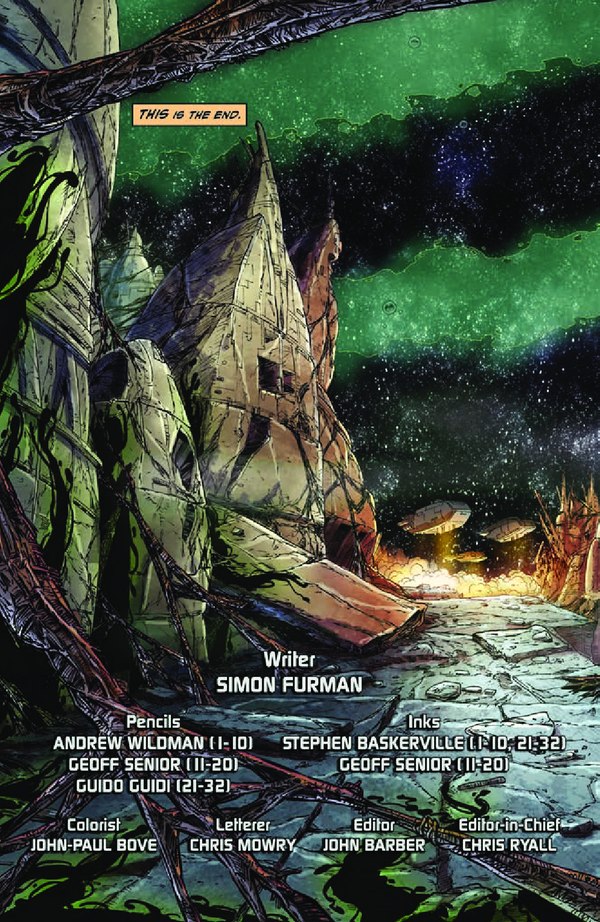 The survivors of the largely failed assault on Jhiaxus and the Hub Network return to a Cybertron transformed: Greeted by a planet of decay, populated by beings of living death, Rodimus understands immediately that he’s been had - manipulated into abandoning Cybertron on a fool’s errand while the malevolent entity born from the darkness of the Matrix has been left to run free. While the Autobots and Dinobots struggle for survival on Cybertron and attempt to rescue Nebulos from Galvatron, the Dark Matrix Entity seeks to use the unique combination of elements within Spike to allow itself to ascend into the multiverse and spread its influence through all reality.

Overall, the timing of the finale feels it owes more to do with reaching the predetermined issue #100 mark than it does with a natural end to the narrative. While some of the setup for these events was shown in previous issues, the lack of focus ReGen One has had up to now has not really given the elements which now turn out to be important as much attention as they deserved. While the series has had issues with story arc pacing all along, The War To End All Wars does the same but in the opposite direction, taking the storylines of Jhiaxus and the Dark Matrix Entity and truncating both to fit in the final five issue arc the series had left. Worse still, the Jhiaxus/Hub Network story was all but completely unnecessary, the only purpose it served being to get Rodimus Prime and company off-planet long enough for the Dark Matrix Entity to consume Cybertron. This same effect could have been reached in a number of other ways in fewer issues and left time enough to let the Dark Matrix feel like more than a last minute inclusion in the plot. The end result is a final boss appearing virtually out of nowhere in a display of the worst tropes of anime-style writing for no reason but to close the story. While trying to avoid overt spoilers, the ending of the book has been geared towards solving a specific problem with the current idea of Primus and Unicron as multiversal entities and the fact that neither of them currently exist in the original Marvel continuity. Whether this was a problem that was worth devoting 22 issues to is a debate that falls outside the scope of a single-issue review. But ultimately, the fact that the book is brought to a conclusive end is, frankly, more than we were expecting.

The art duties are divided fairly evenly, with Wildman and Baskerville taking the first third, Geoff Senior the second, and Guido and Baskerville take the ending. Guido on the end where the most important story details and action scenes occur is especially good utilization of resources, as while he’s still doing his best to emulate the style of Wildman, Guido has his own very clear style in how characters move and panels are laid out. It’s very interesting to see Wildman and Guido in a single issue, as in the past it seemed more difficult to spot the subtle differences between genuine Andrew Wildman and Guido’s amazing emulation, having both with only a short Senior gap in between makes it very apparent how much Guido brings of himself while remaining very faithful to the book’s overall art style. On the other hand, Geoff Senior isn’t used to very good effect here, as one of his first pages involves a panel of characters from various universes that each had their own very distinctive art styles- a task that sadly would have been better suited to either of the other artists contributing to this issue. While it’s nice to have Senior included since he was present for many of the significant parts of the original G1 and G2 runs, it doesn’t do the flow of the book any favors by creating an interruption to what would have otherwise been a very smooth transition between contributing artists.

And for the last time, we have an extended Cover Roundup! On Andrew Wildman’s general-release cover, Rodimus Prime squares off against Optimus Prime- all three of him, using all the bodies he occupied in the Marvel comics. It’s a solid enough cover with good coloring by Jason Cardy, particularly on Rodimus himself. The convention-exclusive cover features Wildman teamed once again with Stephen Baskerville, with Optimus shooting Rodimus point-blank in the chest in the air above Cybertron. It’s a really nice cover, and would’ve been a good choice for the main retail cover in all honesty. Retail cover B is a variation on Bill Sienkiewicz’ original cover to the first issue of Transformers, proving once again that Guido can do absolutely anything well. Geoff Senior’s cover depicts the Dark Matrix Entity attacking its servants, Fortress Maximus and Galvatron. It’s probably Senior’s best work this issue, though it does seem like it continues the danceoff theme I noted back in issue 98- especially Fort Max. A lot of his recent covers have felt like he’s been trying to fit a horizontally-aligned composition into a vertically-aligned space, and this issue is another example of that. There’s also a limited number of sketch covers by G1 artist Herb Trimpe; since these will be unique and no digital copy of any of them exists we weren’t able to view them for the purpose of writing this review.

The surprise favorite of the group is the Robert Atkins GI Joe crossover cover, half of a joint art piece shared to issue 200 GI Joe: A Real American Hero, due the week after ReGen 100. Atkins is not an artist necessarily familiar to readers of the Transformers books, but he brings a very clean, mechanically focused style to the major characters represented in this piece. He’s another of a growing list of artists who I’d love to see do full issues of work on a regular Transformers title. Romulo Fajardo’s excellent coloring only serves to further enhance what is a very beautiful piece of art which would be great to be able to own a clean print of, or even as a full-on poster.

So in the end: was it worth it? The decision to include the real-world 20-year gap in the comic itself created more problems than it probably solved, and if you’re going to depart from the established continuity that much, picking up numbering from Marvel issue 80 is sort of just a gimmick. As a way to put the Marvel continuity to bed once and for all, it’s if nothing else less open-ended than the G2 ending: there are no more adventures for the Autobots and Decepticons we’ve been following to have. But the pacing from issue 81 on has felt odd, halting, and out of step with what we remember of the Marvel days. And while it gives the appearance of being the closing chapter of the Marvel continuity, the reality is that the structure of the ending leaves open virtually unlimited possibilities to incorporate even more stories into a world that by this point has become nothing if not a beaten horse. Simon Furman has had a singular opportunity in comics to return to a story he was forced to leave unfinished. While opinions of how he has utilized this chance vary considerably, for better or worse, ReGeneration One represents a unique situation in comics.