The end nears! Time and space collapse towards Shockwave, who stands on the edge of realizing all of his goals. Everyone comes together to put an end to his plans, but who will be required to sacrifice their life to ensure that all Cybertronians have a future? Written by John Barber and James Roberts, art by Andrew Griffith, with colors by Josh Perez.

With seventy billion Ammonites converging on Iacon, Bumblebee orders an evacuation of all Cybertronians, but Perceptor informs him there's nowhere to run, as the stars have begun moving toward Cybertron. The universe itself is collapsing. With no other options, the Autobots and Decepticons launch an assault against Shockwave, to either stop him and save the universe, or die trying. 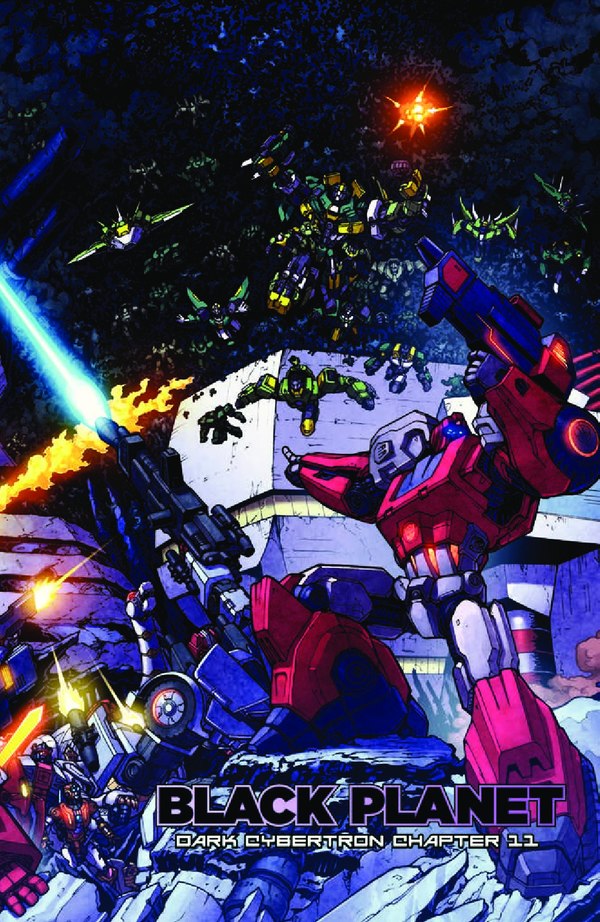 Story is a little bit light, since this is largely an action issue as well as being the lead-in to the climax of the event. The opening flashback is probably the most dense element of narrative for the entire issue, and is necessary to set up probably a couple of things for later on involving Brainstorm. But besides the immediate element of pushing things forward to the final battle with Shockwave, the effort to bring everyone together by way of common threat continues. The three powers at play are represented in the force that moves on Shockwave's lair in Crystal City: The allied Autobots and Decepticons are obviously there, plus Metalhawk, Starscream, Scoop and Rattrap to bring in the neutrals. Everyone is fighting together for the common goal of survival, and this will certainly be the motivator setting the pace for the books after Dark Cybertron has finished. While I feared last year that Megatron's return would signal the end to the interesting period of Transformers not being in a state of open warfare, it seems the truth of the matter is that this status may still continue, and perhaps even better than before. If nothing else, the writing of this issue has done its job and I now hunger intensely for the next issue to see this concluded as well as being extremely eager to see the directions both main titles will move forward on in the aftermath. I would not have predicted coming to this point when the crossover launched a few months ago, but sometimes it's very, very good to be proven wrong!

Andrew Griffith arts it up all over the place this time, and he's not holding back, either. Multiple splash images and two-page spreads can be found through this issue, giving highlight to Griffith's skills. The title page image is especially impressive with a sky darkened by Ammonites and the perfect sense of a hopeless battle being waged against them. Not everything is exactly right, though. For one thing, while Griffith's incredible consistency is hitting on all cylinders, Bumblebee is consistently drawn on model to an older body style that the Generations toy was based on, rather than representing the toy itself. I have a little problem with the physical combat panels as well, because there's a stiffness in how the actions read to me. Especially in a case where Cybertronian martial arts are involved, there's a lack of feeling motion or energy. There's less to it of capturing a moment in an active fight and more that the figures involved are being posed to create that moment and not really carrying any momentum. Those things aside, there's more than a few really cool and sometimes pretty fun panels throughout the book, and those are going to be what's remembered from this issue far more than minor technical complaints.

Toywatch! The cover lies, but only so far as it's using the art for Legends Cosmos. I'm gonna say Jhiaxus is our pack-in character this issue, and it's been managed in an unexpected way. Jhiaxus dons a suit of Reactive Armor that changes based on the circumstances in combat, and at one point - a single frame to be specific - the armor reconfigures to resemble Starscream's body just as our upcoming Jhiaxus toy does. However, the comic represents it without the mold changes the toy has, aside from having Jhiaxus's head, and also in all of the wrong colors. The Reactive Armor was blue, white and yellow, so that's what colors Toy-Jhiaxus is drawn as well. Um, oops? So let's recap: The toy this is likely to be packaged with now is representing one specific format of a suit of armor Jhiaxus is wearing over his actual body during a part of one battle, does not match the details of the toy, and is colored completely differently. I think we may have just hit a Toywatch Hat Trick with this one.