The Transformers: Robots in Disguise #1 - Generation One - IDW Motion Comic

Experience the beginning of Robot Politics again for the first time as Robots in Disguise issue 1 makes the leap to motion comics from Madefire! Bumblebee struggles with his new responsibilities as the leader of the entire and ever-growing Cybertronian population in Iacon, Cybertron's last city. But even caged and fitted with deterrence devices, the Decepticons under leadership of Ratbat have not given up... Written by John Barber, art by Andrew Griffith with coloring by Josh Perez. Motion Comic build by Tomas Sisneros, with separation and setup by Angela Lo. 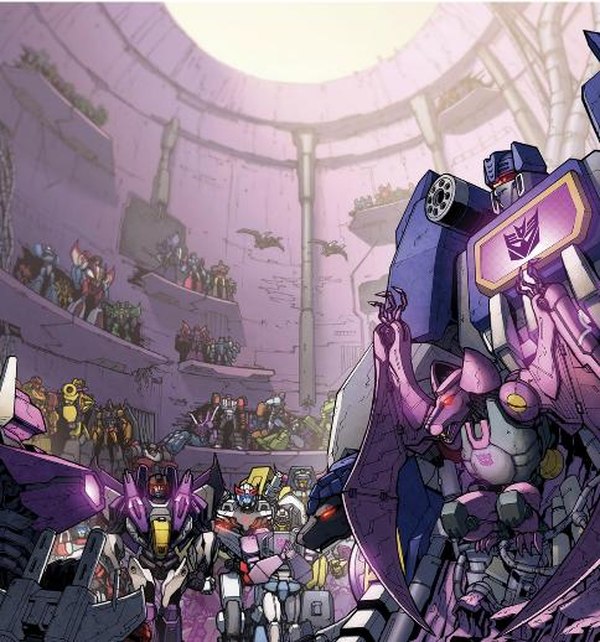 Having until now had only a short experience with this format in the preview for More Than Meets The Eye's first issue, I was interested to run through a full issue adapted to motion. Having dealt with other systems where the progression through a comic book was guided in a pre-determined way, the basic mechanics felt familiar. Madefire goes a step beyond that by essentially constructing each page of the comic panel by panel, and sometimes in stages of individual elements within a panel. When this works well, it works very well. Compatibility of the original art is of course the most important factor to consider, but the team that redeveloped this issue for motion delivery clearly did their best to make the most of everything available to them. One particular highlight was a sequence of a vehicle mode Ironhide jumping across a river of molten metal towards the city wall and transforming midair. This was realized here simply by switching between the steps of the transformation sequence that were shown all in one frame in the static version, creating a very nice movement across the panel. Even when something that fancy isn't possible, there are elegant movements just by cropping and panning across an otherwise static panel to imply the movement. Even for large scenes, just having the full art revealed gradually and in a specific direction will create a different experience even for readers already familiar with the content of the issue.

Sound effects are one of the distinguishing elements here. They're used a bit sparingly, and really only exist as transformation noises and generic running vehicle sounds at certain points. In one case the sound of a running engine seemed to last a bit too long to where it became distracting rather than enhancing the effect of a page. I'd like to see the use of sound additions refined a little more. I think opportunities are being missed by not using the chance to build in more general environmental sounds, like the constant ambient noise of a crowd in scenes with many people, or basic sounds of computers and other equipment when in a suitable location. There's a lot of room that they could play with using sound to make a more immersive experience out of the books, and I really hope that as time goes on they will take greater advantage of this element that helps distinguish their work.

The main delivery method for these motion comics seems to be through an iOS app. I would presume that they're designed to work nicely on the limited screen dimensions of a tablet or phone, but being limited to iPhone or iPad I was unable to test this for review. I did attempt to view this issue using my Android phone, but without native app support, and Flash Player and Android not being exactly on speaking terms anymore, I was unable to get any sense of how the motion comics would read on a mobile device. For PC users, Madefire publishes full issues, or episodes via DeviantArt where they can be viewed in your browser. Using MTMTE #1 as an example, an issue like this appears to run about $3 worth of DeviantArt credit, a little less than the original publication price of the static version. But if the main intention of redesigning these issues is for reading on mobile devices, I'd really like to see support for Android rolled out to open accessibility to as much of the available audience as possible. If limited to viewing on a PC, I'm not convinced that this brings enough to the table in its current state to warrant rebuying issues so close to the new-issue price.

The first year or so of Robots in Disguise was really interesting to me and a fun direction for a Transformers title, and I really enjoyed being able to go back to it and have a new experience thanks to being adapted to motion. I'm not sure I would sign up to buy the entire series over again as it's released here, but there is absolute potential in this and just going a little farther with how these "episodes" are designed could make them an easy sell, especially once support is expanded beyond just iOS for mobile.