It is the end of time and space as all of existence races towards Cybertron to become a singularity to feed the world forever. Autobots and Decepticons join together, but against the dissolution of reality as they know it, and 70 billion Ammonites, does any hope remain? Story by John Barber and James Roberts, layouts by Phil Jimenez, pencils by Brendan Cahill, and inks by Brian Shearer, with colors by Josh Perez.

The Transformers wage a losing and pointless battle against the overwhelming masses of Ammonites bearing down on Cybertron as time and space collapse inward. The best efforts of all involved have reduced the number of their attackers by only barely more than 10,000, not enough to affect the certain outcome. The members of Optimus Prime's team afflicted with the Dead Universe begin to die following their return, forcing Optimus, Ultra Magnus and Rodimus to decide who must walk away from the battle with Shockwave to help carry the dying to needed help, while Megatron attempts to overpower Shockwave one on one. 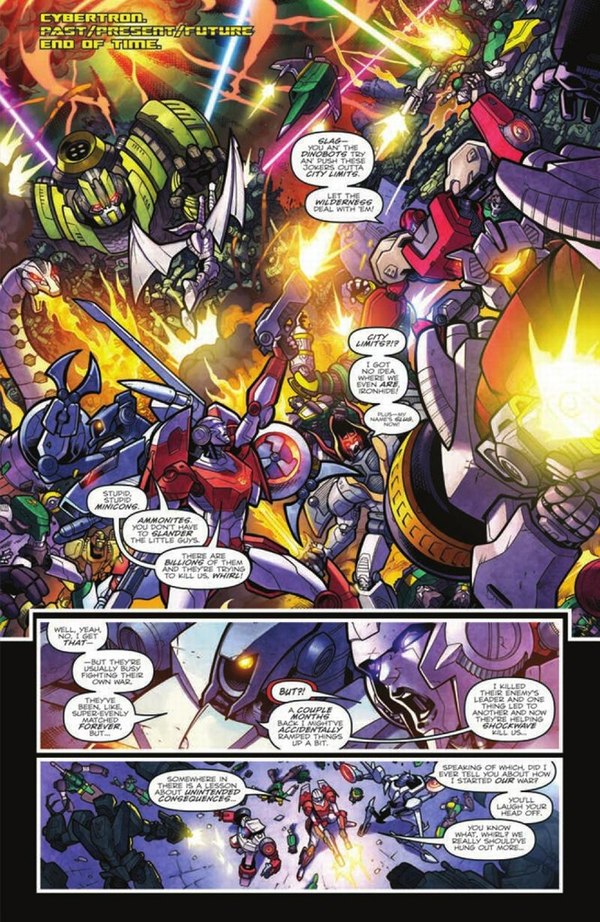 We needed some of this interaction last issue.

The ending of Dark Cybertron feels so far removed from where the event storyline began. And while the ending would always have been planned to play out in this way, it was very hard to see a point during the first few issues. That may be the greatest weakness of Dark Cybertron as a whole where the true nature of the plot was so deeply buried that it made a large chunk of the story feel aimlessly meandering. Once the Necrotitan segment of the story was out of the way, everything came together more clearly and strongly and there was finally a solid course things were following. I fear that the necessity of spreading this story over three or four assortments of toys caused it to have to been padded out. Looking back on the complete work, it feels very much like it might have managed with as little as half the issue count it took and not lost any substance.

I mostly look back on the full run of the crossover here because there's very little to go to with this issue's specific story that would not spoil some aspect or another. Megatron's character arc to what the solicitations already spoiled us on is seen completed here, and while I'm all for taking long held characters in different directions and seeing where they can grow, the more I think about it all the harder it is for me to accept the timeline of events. From the point of crushing Bumblebee's head in his fist to Megatron calling Bumblebee his friend is around two days in-story, while it's been over a year since that issue was published. It's hard to remember that what seems gradually paced is basically all at once within the context of the fiction. I'm interested in where this will go regardless, but I wish the timeline of the story since Megatron returned had been a little bit longer so it didn't have to rely on the real world passage of time to build this up in a believable way.

So while things are decisively resolved as far as this storyline, we're also left in a position where we don't have to have seen the last of anyone that played a role. Backdoors are placed for anyone that needed to be taken out of the story right now to be able to return in the future if required. It's not surprising that major brand name characters would be handled so they're not permanently out of play, but it's also a little bit obvious that it's being made to work that way which removes some amount of the impact when you can look at it and see easily, "well, that'll be their out next time they want to use him...". There's no permanence, and even if that's the result of higher level mandates, it just means the events don't have the weight the story wants you to feel from them.

We have page layouts by Phil Jimenez once again, just as we did in Dark Cybertron #1, and while we don't get anything quite as great as some of the panels in that issue, we do have nicely laid out large images, fight scenes with good feelings of activity and movement, and generally good shot blocking. The combined efforts of Brendan Cahill and Brian Shearer give the finished art a very good, consistent look that works really well in capturing the cast members from both main titles in a good style. In the prior issues, some characters just don't play as well in Milne or Griffith's specific styles, so it was fun having the final issue work a good compromise by using a third style that suits everyone. There's not a whole lot to speak to with the art beyond that - everything turned out very nicely, it's pretty and fun to look at, and there's really not anything I feel is worth nitpicking. Good stuff!

Toywatch! ...is probably over with. It'll remain to be seen if the inclusion of comic books with Generations toys will continue after all the Dark Cybertron issues are used up. Maybe we'll find out about that between Botcon and SDCC this year. In any case, I couldn't say who seems likely to have the finale issue as a pack-in. The characters that get the focus are either not getting new toys at all, or are in the wrong size class. The retailer incentive cover is the beautiful piece by Phil Jimenez and colored by Romulo Fajardo, Jr. that was the box art for SDCC Metroplex. It's not new to anyone, but it's damn pretty. And you can check out the clean version on Romulo Fajardo Jr.'s DeviantArt page

Next month the adventure starts anew in our main books and the Windblade miniseries. After the RID 28 preview, I can hardly wait to see what's in store from here on out!