More Than Meets The Eye #2 Motion Comic - Generation One - Comic

The Lost Light has had the first of its many disasters, and as fate would have it, Skids is having one on the same planet. Also in this issue: Swerve gets to tell Tailgate how long he's been unconscious, and Cyclonus and Whirl have their non-reconciliation! "Liars, A to D Part 2: Hangers On" is written by James Roberts with art by Alex Milne and colors by Josh Burcham. Built for the motion comic format by Tomas Sisternos with setups and separation by Angela Lo. 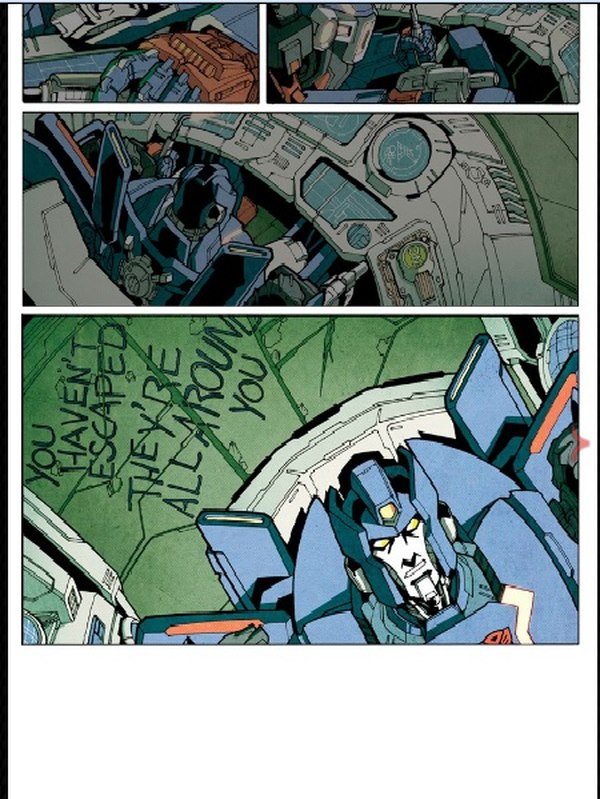 The reveal on this is an excellent, excellent use of the motion comic format.

After a catastrophic error involving the Lost Light's quantum generator, the crew begins a search-and-rescue mission for those who were sucked out of the ship. New crewmembers are added as Cyclonus is outed as a stowaway, Tailgate is roused from his slumber and informed of how long he was out, Whirl is patched up, and Skids comes crashing onto the scene. But Skids' shuttle is made of mysterious golden robots who are obsessed with "Nineteen Eighty Four." What that means is anybody's guess for the next dozen-plus issues, but for the moment it amounts to "Kill Skids." Even despite his amnesia, Skids is not going to take that lying down.

I was not reading MTMTE yet at the time of this issue's original publication, but I'm glad I have a chance to revisit it in a new format. Everything that makes MTMTE the highlight of my comic-reading month is on display here, with great character writing by James Roberts and clear, crisp art by Alex Milne. Roberts' ability to write entertaining and engaging characters is already on full display, and Milne makes even simple conversations a pleasure to see. More than any other artist who's worked on the book to date, he has the ability to render everything the book needs- expression (even on characters whose faces are a visor and a faceplate), action, staging, and consistency. The book is funny, smart, and great to look at.

The motion comic format is used far more effectively here than on Monstrosity #2, my previous experience with Madefire's Transformers output. You could say that using a superior source would naturally result in a superior product, and... I could not dispute this! But also, the enhancements of this issue are simply more impressive. While the presentation style of things "settling" into place and then becoming static is maintained, the transitions are more varied, and used to excellent effect, as with Skids' note-to-self being a separate reveal for one. Another highlight is the way that a panel with Skids being knocked to the ground by his pursuers flops into panel. There's also some excellent transitions in the fight scene, but going into what I enjoyed about the presentation scene-by-scene would simply take too long. On top of which, sound is more present though not overbearingly so: we get some motor noises as various bots drive through panel and a couple transformation sound effects (one of the more recent ones, I think hailing from Transformers Prime for those curious). Maybe Milne's artwork is easier to work with for this format, or maybe this team simply goes for a more dynamic motion comic. Whatever the reason, my compliments to Tomas Sisternos and Angela Lo for creating something that I feel truly enhances the original comic. The one thing that I'm not sure will be ideal for all screens is the size of the text. On my screen- where the image is probably larger than your average tablet even despite having the wrong screen orientation -the text can be a little bit difficult to make out unless I'm right up on the image. Not illegible, but just a little uncomfortable.

This is probably the best issue you could have to decide whether motion comics are for you. While the format may not "save" a mediocre comic, a great comic is in fact enhanced in the adaptation, especially when the adaptation is lively while still respecting the original art. Better issues still await the best Transformers comic in the future; hopefully Sisternos and Lo will continue on their successful trajectory the way Roberts and Milne have.