Six months after the events of Dark Cybertron, Windblade struggles with her new life on Cybertron. At odds with Starscream over her duty maintaining Metroplex, and by extension the Cybertronian population residing within him, Windblade's real problems are only just beginning... Written by Mairghread Scott, with art by Sarah Stone.

Windblade enjoys a moment of peace watching the sun rise over Iacon, now largely formed from the returned Titan Metroplex. As the only individual on Cybertron able to communicate with Metroplex, she has fallen in to the role of superintendent and has become responsible for the city's smooth operation. A fact Starscream is only too eager to turn against her with the city's populace if Windblade can't correct a series of seemingly minor system errors. Receiving only vague clues from Metroplex directly, Windblade and Chromia set out in to Metroplex to discover the cause. 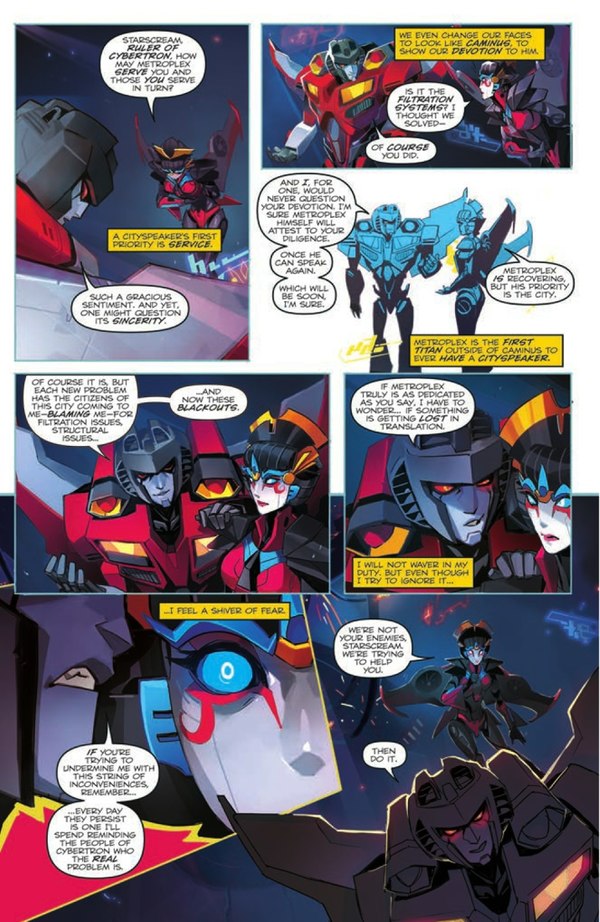 I'll lay it out to start: I'm a big fan of Mairghread Scott's writing. She was behind a couple of my favorite Transformers: Prime episodes, and her contributions to the short Beast Hunters comic series were a bright point in a series that died off too quickly. I was very excited to see she would be taking on writing this title, and her style shows through very clearly. Our newer characters Windblade and Chromia are brimming with personality, fun and layered in their dialogue and interactions with each other and everyone else. Dark Cybertron's appearances of Windblade did nothing to give an idea of who the character was, and for the most part she was generically mysterious, and largely flat. Windblade now is a far leap from that, with just the first few pages giving a clear idea about this individual. Mairghread's Windblade is young, full of conviction and idealism, but the strain of the responsibility she carries and this familiar-but-foreign environment is close to overwhelming her. It's a big load of who the character is, and all of it is presented in a natural way without any overt exposition to communicate it. The longer standing characters featured in this issue are likewise played with a great deal of life and substance, some delivered from the expression of Windblade's thoughts, some from how they speak. Starscream is most prominent of any of the regular Cybertron-based cast, and he's handled beautifully here. I had a great deal of confidence in the character writing going in to this issue, and I was not disappointed in the least.

The story of the first issue is a lot more about seeing Windblade interact with the world than it is about quickly establishing a plotline. It's part of how we learn who Windblade is. She's been on Cybertron for months, so she knows some people by now, but still more at a distance. In contrast to the other books where we follow characters who've known each other practically forever even if across faction lines, Windblade is still an outsider, and it lets us have a very different perspective on the way life on Cybertron works. In this way I feel like this issue picks up an angle that Robots in Disguise might have let slip past unutilized: with a population of Cybertronians who sat out the war, there's a lot of chance to see the world through their eyes, how you're treated when nobody knows who you are. Windblade might be known of since her arrival, but nobody really knows her yet. The build in to the apparent overall story of this miniseries comes about slowly, naturally, only really leading in clearly near the end of the book. At which point Windblade jumps to an obvious conclusion about what's happening, but I have my doubts whether it will turn out to be quite that simple or straightforward.

Sarah Stone is a new name to official Transformers art, and a most welcome addition to the array of artists that have visually shaped Transformers. Apart from a very striking art style that plays VERY nicely with Transformer characters, she has really strong skills in conveying body language, facial expressions and motion. The action scenes near the end of the issue look downright amazing, and the entire issue gives a feel of life and activity in both the characters and their environment. In a scene with Windblade on a street at night, the crowd is rendered as shadowed forms giving the impression of a crowded world that appears faceless and distant. Similar methods are used in other scenes, and really help get across that while being a member of the same species, this is really an alien world and society to Windblade. Character designs are "tweaked" a bit compared to what we might be used to from Andrew Griffith or anyone that contributed to Dark Cybertron, but to positive effect. There's a stylish angle given to many of the pre-existing character designs that makes them more expressive and helps the characters show through just from the visual end. The environment and background art is done just as well, with a subtlety to keep them from overwhelming or distracting from the characters in the foreground, but with a great deal of detail and care given to them.

Sarah does her own colors, using a nice painted style that really clicks with me. There's a certain quality to it that makes me think of really nice cartoon art, which while making for an unfortunate pun ends up really matching up well with how animated the characters come across. The coloring is always very reflective of a situation or place, with bright, but somewhat sterile colors in some places in daylight, but contrasted with warm, but darker colors inside a bar for example. The mood of each scene is set very strongly in the color choices, showing the great skill not just in the line art but the coloring as well. Whether the Windblade title gets extended past the initial miniseries or not, I absolutely want to see more work from Sarah Stone on Transformers books in the future.

The occurrence of more female Transformers is sort of given some attention, first by Rattrap asking the obvious reader question of why Windblade and Chromia are different from everyone else - which is flatly ignored, but later Windblade monologues a little about the origin of the Cybertronian colony she came from, giving only a vague allusion to the Cybertronian nature of change and adaptation. Future issues may prove me wrong, but I'm expecting that we won't hear anything more specific about this. From the various interviews, it's seemed clear that Mairghread wants this to be a non-issue, both in universe and from the real world point of view. And I'm fine with that. I don't think ultimately it's something that needs comprehensive explanation or justification, and if all we get about the origins of Windblade, Chromia, Nautica and any other individuals that may trend female going forward is what this issue presents, I think that'll do just fine.