The Autobots return to Earth and the regular creative team returns to RID! In the wake of Dark Cybertron, Optimus Prime leads a new team to Earth, the planet where the war ended. But Earth has changed in the wake of the Transformers' previous visits... "Earthfall Part 1: Hello Cruel World" is written by John Barber with art by Andrew Griffith. Colors by Josh Perez and Joana Lafuente. 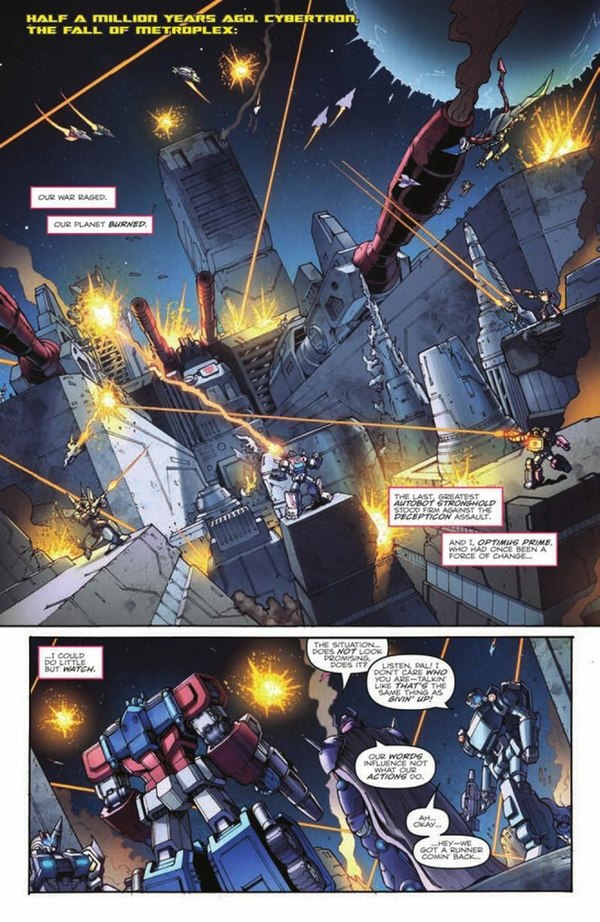 On Earth, six months after the events of Dark Cybertron, Thundercracker returns from a relaxing flight to find the door to his home open and his dog Buster out and about. Inside, a human woman waits for him - and informs him that the peaceful life they've given him has earned them a favor. Six million years ago on Cybertron, Alpha Trion and Metroplex departed for parts unknown. Five months after Dark Cybertron, Windblade conveys Alpha Trion's single-word message with matching hologram to Optimus Prime: "Earth." Backed by a team of Autobots, Prime heads to Earth- but Earth seems to know they're coming, which shouldn't be possible with their ghost-shield technology. And there are more surprises waiting on the surface.

With a six month timeskip to account for, there's an awful lot to set up in this first issue after Dark Cybertron. The time it takes to establish all of the new situations slows things down a bit more than I'd have liked. The new roster looks like it should be interesting though, and I'm especially glad to see Prowl and Arcee in Optimus' team as they've been important and complex characters over the course of RID. Prowl's already butting heads with Prime, trying to assert authority- it seems that in the absence of a clear enemy, Prowl's scheming is in danger of turning inward. Prowl's still living up to his line in More Than Meets The Eye: "...you think that just because the war is over, we can afford to stop fighting!" Among the others are Kup, Jetfire, Cosmos, and... Jazz, last seen renouncing his Autobot membership to remain in New Iacon. Guess he had enough of Starscream's tenure as leader of Cybertron already!

Honestly, I'm not sure how I feel about the return to Earth and the new situation for Prime's team of Autobots. I trust John Barber to write a engaging story, but after the groundbreaking Robot Politics story arc- which more or less lives on in the Windblade miniseries -a return to a more traditional type of Transformers story is going to take some adjustment. I know there are good reasons for it, and I'm happy to see Mairghread Scott and Sarah Stone get to play in the playground John Barber left for them. But Windblade is a limited series, and I'd hate to see Starscream's reign on Cybertron go unexplored after the end of that. (Ideally I'd see Windblade not end, just to concur with ExVee's positive assessment, but I digress.) I think the best way to put it is that I'm looking forward to seeing Earth made into as fascinating a place as Cybertron has become over the last two years.

Another good point of the issue: Andrew Griffith is back! He's in good form, with art as solid and consistent as ever. While Dark Cybertron introduced us to some new artists, it made me appreciate Griffith's strengths even more. Which is not a knock on the new artists, some of whom were quite good! But there is truly something to be said for someone who excels at taking complex robot designs and making them look solid and real and three-dimensional. Griffith is a cut above the rest in this sense, even if his expressions are more subtle and subdued than I might prefer compared to Alex Milne or Sarah Stone. And again, he gets scale- the liftoff scene during Metroplex's flashback departure from Cybertron is gorgeous. The human in the book is probably the only place where Griffith is even slightly inconsistent, and it's only slightly so; it's not like her entire facial structure changes from panel to panel (with other artists I've seen it happen... and worse) so much as that non-mechanical faces are harder to render consistently. Josh Perez continues to bring the more saturated colors compared to More Than Meets The Eye, while Joana Lafuente goes a bit less vivid in the flashbacks. Both work very well, though Perez has the edge, so ideally he'll continue on the present-day material.

Sometimes you have to shake things up, and in this case "back to Earth" is a shakeup for the IDW narrative. Wouldn't have been my first choice, but I never expected Robot Politics to be one of my favorite Transformers books either, so John Barber has a lot of leeway from me here. And the book is visually back to form besides. The Dawn of the Autobots is here, and there's still a lot to learn about the new situations. On its own the issue moves a little slow, but with setup out of the way I'm hoping the larger story will build up some momentum from here.