The Transformers: More Than Meets The Eye 28 - Generation One - IDW Comic Book

What happened to Megatron after he declared himself an Autobot? How did he become captain of the Lost Light? Has Whirl found out yet? At least one of these question will be answered in "World, Shut Your Mouth!" Written by James Roberts, art by Alex Milne, colors by Josh Burcham.

Six months ago, Megatron is in detention, awaiting military trial for his actions as leader of the Decepticons, though some would rather skip straight to the public execution and save some time. In the present, Megatron cuts short a session with Rung, and goes about his day as the new Autobot captain of the Lost Light. Meanwhile, something is going missing from the ship... 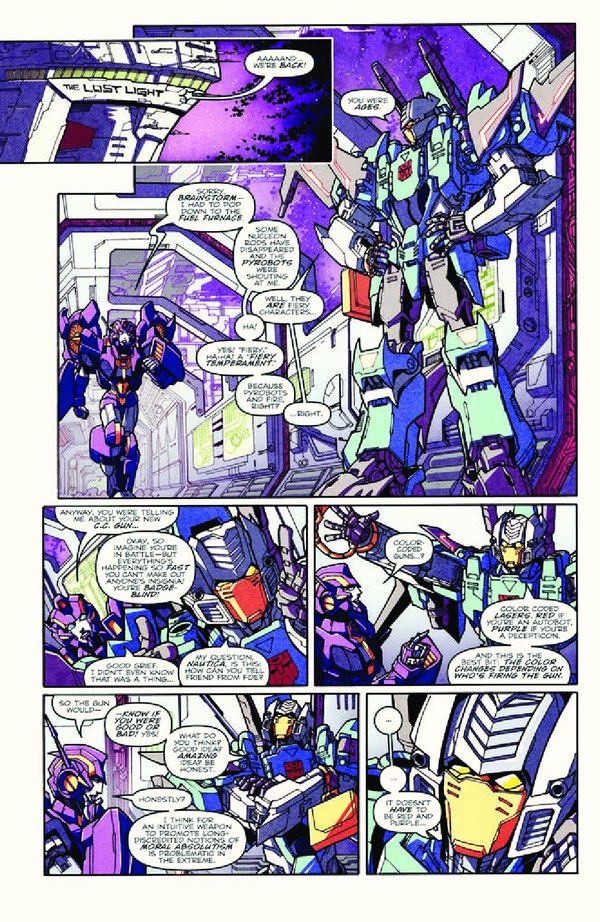 A complaint I had with RID 28 was how little actual story happened within its "return" issue. And ultimately, not a lot of story happens here in MTMTE either. As the first of what James Roberts noted as being a three issue story arc, we're mainly getting set up, and hit the story lead in right at the end of the issue. But I had a lot more fun with this, and it's clear why: Character. The time spent waiting to hit the major plot element is filled with everybody on the Lost Light being everybody on the Lost Light. Things get to happen whether or not they directly serve (or at least obviously directly serve) the story at hand. All of the time in the issue is filled solid with stuff so you don't get that feeling of waiting between pages for the next bullet point, as opposed to its counterpart which used character moments as some of the bullet points. This issue didn't get anywhere any faster, but it did a better job of keeping you occupied during the wait.

Each book doing a six month jump forward was a good choice, and it's understandable this will require flashbacks to fill in some necessary information, so 28 jumps between the issue's present time and more immediately after Dark Cybertron's end, featuring bits of Megatron's trial in this case. But it might have been too much. It was really hard to get a strong sense of things in the present timeframe because it kept cutting away, and that would be fine if nothing important was going on then. But it's MTMTE and everything is important eventually. In terms of starting off with something that fixes Megatron's place on the ship, it's a good and necessary move. But keeping as much focus on the past right at the outset undermines it because aside from remarks of how the crew has no work ethic and similar militarily authoritative comments, you end up not getting any idea of Megatron's present existence besides that he sure walks around the Lost Light a lot. Likewise if the flashbacks had ALL been to Megatron's trial it might have tightened things up better, but instead we have more surrounding stuff, including an extended scene with Swerve. As fun as the character bits like that are to read, as much as they make for straight forward enjoyment of the book, it didn't do the flow of the story any favors. I'm hoping the next issue will be a little more tied down since the important things seem about ready to start and I want to be able to clearly keep up with it.

Artwise, it's nice to have Alex Milne back in the saddle. More Than Meets The Eye is not really itself under anyone else's lines. By and large his work is as solid as ever, with a couple of really nice panels appearing just in what falls in our usual preview page range. His take on Megatron's current body has a nice overall simplicity while building a lot of small detail on. I'm mildly hopeful that it has some relation to the supposed-to-be-coming Leader class Generations toy. Anyway, one fight scene happens and the action isn't super smooth, though at the end you know what's happened it isn't as clear as it seems like it could be while in progress. But that could as easily be page space limitations at work since there were so many different things taking place this issue. However, everyone isn't plated in rivets and suffering from five years of grunge build up, so we're well and far ahead of where we've been most of the last few months! And of course basically everything else in the issue looks wonderful, so we're not gonna belabor one jerky fight here. And the Lost Light looks sterile again thanks to the color stylings of Josh Burcham. That sounds a little more backhanded than it's intended, because that harsh fluorescent light feel is another part of the environment of the setting, and it wouldn't be right without it. The special coloring needed during the fight scene was also carried out pretty well, though a little on the dark side? It might have been part of making it more difficult to easily follow along. But the environmental element was very nice there, and I really loved the establishing shot of the Lost Light at the beginning for that panel's colors.

All in for our start of the post-Dark Cybertron IDW Transformers universe, and things are moving along pretty solidly. I'm hopeful for next month to have RID pick up steam, MTMTE to settle down just a tiny bit, and Windblade to keep being awesome. I'm really glad to see things starting to get back on track with the crossover behind us.