Release Data: Estimated release date of May 12th 2014 from online retailers and May 17th at brick-and-mortar stores, at a suggested retail price of US$14.99.

This fiery warrior hates taking orders, unless it means he gets to destroy something. He'll level anything in his path with a fit of white-hot dino rage.

After saying at one point that he hated the Dinobots, Michael Bay has heeded the fans, the investors, and Hasbro, and added them to his live action Transformers film franchise. Today we have Slug, who is the movie equivalent of Slag. In case you missed it for Fall of Cybertron, the IDW universe or even Transformers Animated, "Slag" is a demeaning term in the UK, and so the name has been changed. But we all know by now that the name is the least of the changes in store for us in the transition from G1 to film. 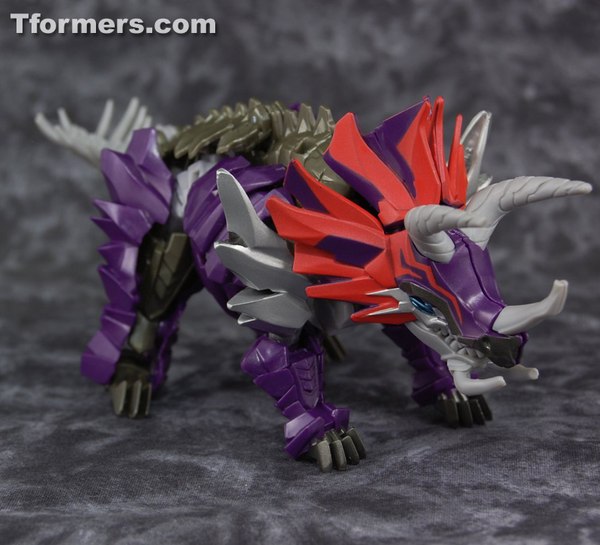 Slug remains a stylized robotic triceratops- it's just the style that has changed. Technically you could call him a pentaceratops due to the two extra horns on his lower jaw if you were that much of a stickler for terminology. And went to Wikipedia to confirm that "penta" was the correct prefix rather than the Latin-derived "quinta". But why would you bother doing that when pretty much nobody who wants to know about the quality of a robot toy would care?

I've joked for a long time that the movie aesthetic was that of a bag of silverware glued together in the shape of a robot, but Slug's dino mode takes knifeiness to new heights. The Dinobots are seemingly designed to look skeletal and spiny (or possibly feathery?), and so practically every armor plate on the body terminates in a point. That just works better on robot dinosaurs though. I think being liberated from having to relate the mech designs to real vehicular structures has helped quite a bit. Slug looks pretty good from most any angle- the front, the top and the sides all do a decent job of hiding robot bits. Not perfect, of course, but that's very tough to do with these designs without providing a full-body shell- and that creates its own problems. About the only thing that looks off deco-wise is that Slug's spine is a nice deep gunmetal color... and then terminates in soft silver plastic for the super-spiny tail. I'm not sure you can do gunmetal in that kind of plastic, even, but I would have liked a more natural segue between the one color and the other so it didn't look so much like a materials mismatch. 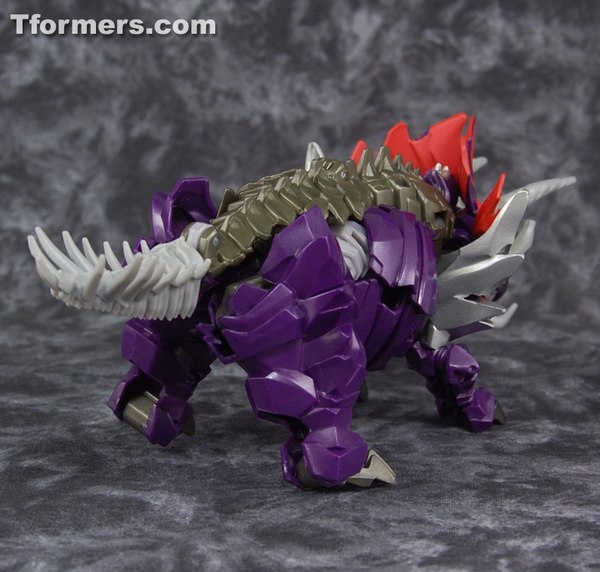 Articulation for this mode is pretty limited, as the limbs are all surrounded by body plates and the knifey bits clash with one another and move things out of alignment if you push your luck. The head is mostly immobile which is pretty standard for triceratops Transformers, but the jaw does move, which is standard to almost all beast Transformers with pronounced snouts. Overall, think a Generations Rhinox level of mobility.

A lot of it is pretty familiar and not too tough. The hindquarters of the dinosaur become the robot mode's legs in a pretty familiar way. I like how the flanks of the triceratops double over to become the forearms in particular- not sure I've seen that before! The neatest thing is how they resolve the age-old problem of leftover Beast limbs, with Slug's forelimbs used to widen out the robot torso. It's also the toughest part to get right, as getting those legs pegged into the torso at the right angle can be difficult. The legs are on the same hinge as Slug's robot arms, so you have to have those swiveled into proper position before you can think about getting the dino legs pegged in. Going back to Dino Mode, getting the tabs on the backs of the hips lined up properly can be difficult, but even if you don't it's not a big burden on the aesthetics of the toy. 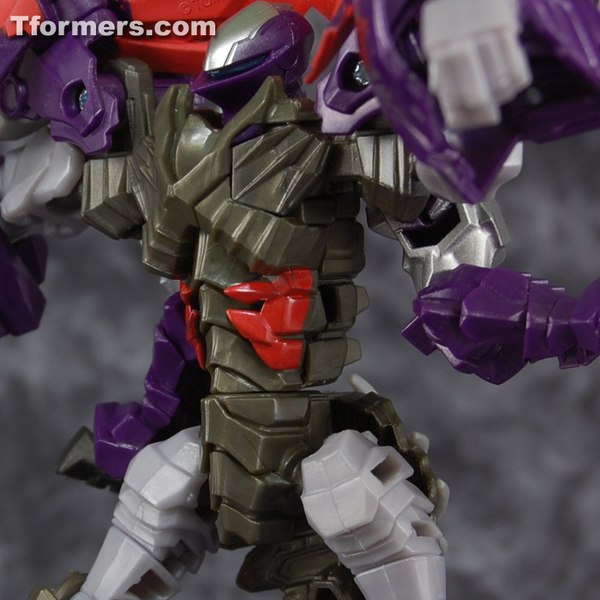 Slug turns into a humanoid robot with very few weird tics of anatomy- the most notable is the odd shape of the thighs, which curve more or less backwards relative to a human being's. Other than that, he's more within my personal comfort zone in terms of anatomy. I've said this before elsewhere, but the general look of the Dinobots' robot modes really remind me of mecha designer Mamoru Nagano's The Five Star Stories. Nagano has a penchant for narrow waists, layered armor designs, and pointy feet- all of which are very much present in Grimlock and Slug, in particular. Topping all of this pointy and layered body work is a smooth, rounded visored helmet. It's almost knightly looking. I like the contrast there, both to Slug's own body and to the heavily detailed faces most other film Transformers have. Lastly, I can't help but mention the folded-up tail on the rear skirt: the difference in materials makes it look like an Alien facehugger that aimed too low. 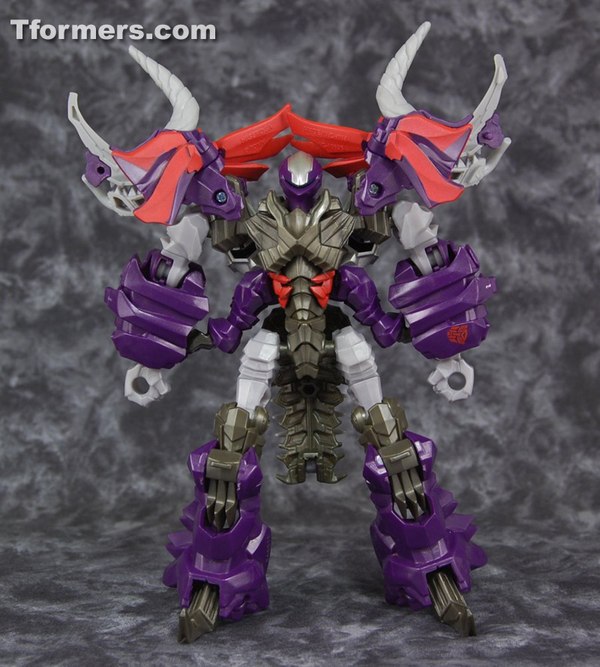 The head's range is limited by its own shape and the shape of the flared shoulder armors- those being halves of the triceratops head. Swivel and tilt are possible but will require some manuvering, and tilting the head too far back will cause it to pop off the neck more easily than I would prefer. The shoulders are limited by the dinoface pauldrons, with swivel restricted to right around 180 degrees. However the lateral movement is good under the circumstances, with Slug able to move his arms almost level with the shoulder. There's a forearm swivel and a hinged elbow that has a 90-degree range. There are no joints below the elbow though, which as ExVee has said before can be problematic for a sword wielding robot. Especially here, since if you turn the arms outward to angle the swords you can see the big hollow spaces inside.

Slug has a waist! It's limited by the interactions of the skirt armor and dino legs, but it can have full clearance if you unfold the tail briefly. The hips have basically all the forward range they will ever need, and decent lateral range though not quite enough to do a full split. There's a thigh swivel that is very tight, but the shape and angle of the thighs mean it doesn't turn the leg in quite the way you might expect. Entirely usable, but it takes some adjusting to. The transformation joints mean the knee is effectively double-jointed, and Slug can kneel quite easily. There's no formal ankle joint, but the toes can be adjusted and will support his weight just fine. And the flared lower leg design makes for a nice, stable base for a good amount of posing options.

Slug comes with a pair of soft plastic swords that carry on the ridged motif of his body in a slightly more streamlined design. They're standard 5mm pegs, and it's that kind of soft plastic that holds its shape reasonably well and allows for a good amount of sharp detail. They fit his hands well, though as with the other figures I reviewed for this first volley of Age of Extinction reviews, I wish he had more joints in the arms to help him with his swordsmanship. There's not storage per se in dino mode, but there are 5mm sockets on his flanks (the fists beneath the skin, in fact!) that allow Slug to plug the swords into his sides, sticking straight out. I like that- the idea of a triceratops charging through the crowds like some kind of chunky Blade Liger is appealing. I do wish it weren't the only method of Dino Mode storage, but it's fun. 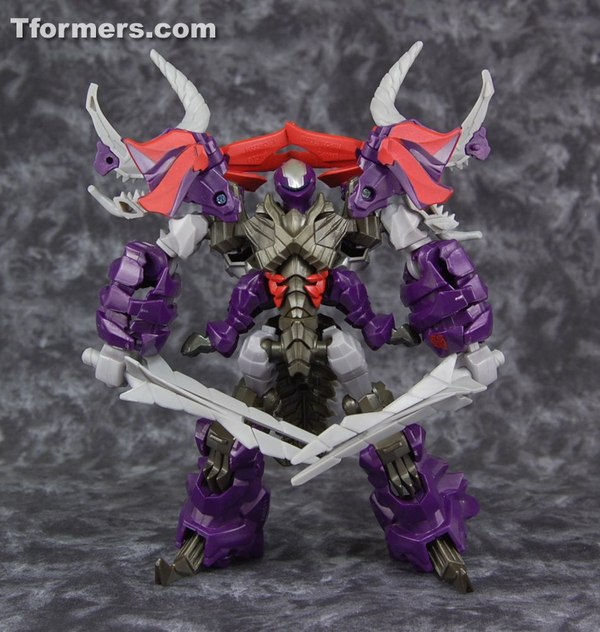 Slug is different enough from the non-Dinobot movie designs that he's pretty neat to look at. He's good at holding a pose, and has good accessories. The restrictions on his articulation are primarily due to the structure of the body, but as an articulation freak I think they do bring things down just a little, as does fiddling to get those dino legs plugged into the robot's ribcage. Altogether, Slug is Good on the Figurereviews.com Non-Numeric Rating Scale. Hopefully the other Generations Dinobots are at least as good.

Figure provided by Hasbro for this review. 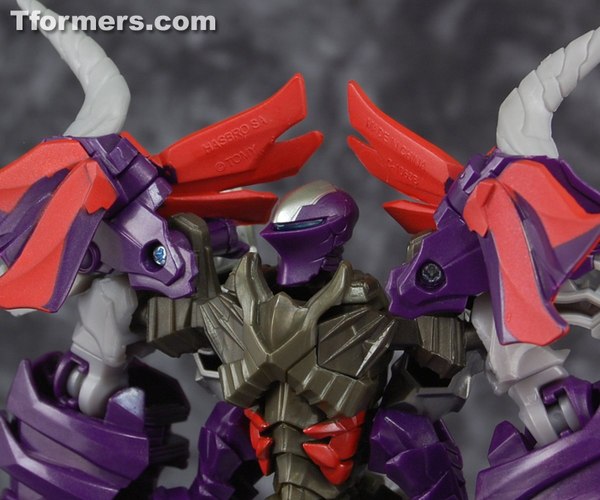