The Transformers: More Than Meets The Eye 29 - Generation One - IDW Comic Book

G-g-g-ghost! What's haunting the Lost Light, what does it have to do with the mysterious disappearances, and why shouldn't the coffin be opened? All these questions, plus Ten in "World, Shut Your Mouth" part 2! Written by James Roberts, art by Alex Milne, with colors by Joana Lafuente. 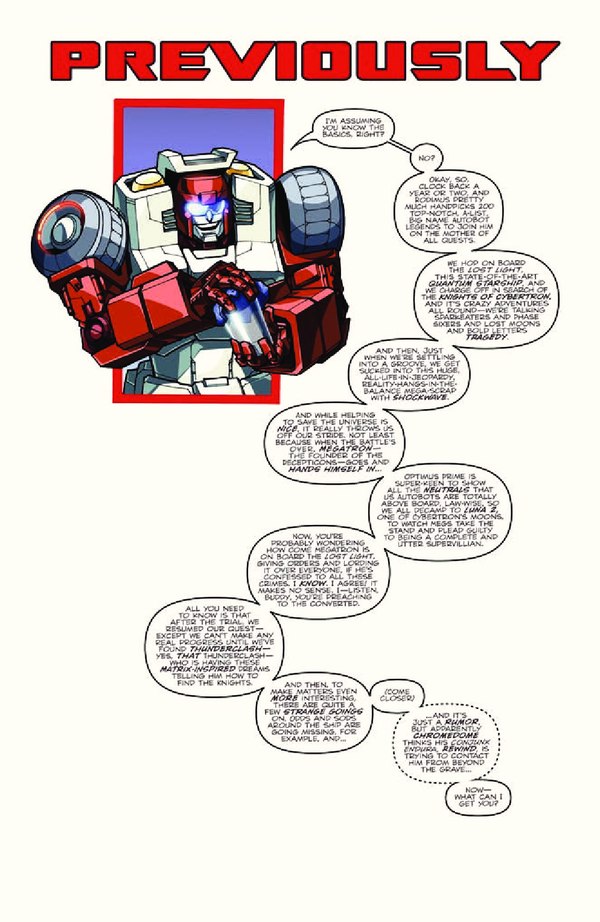 As the trial continues, Atomizer offers Rodimus a chance to find out who his friends really are, while Starscream delivers a carefully crafted victim impact statement against Megatron. In the present, Megatron orders the mysterious coffin quarantined until it can be determined that no hostile contaminants are within. However, when a few Autobots decide to take advantage of an overfueled Trailcutter, things start to go awry. Meanwhile, Chromedome seeks out Nightbeat for specialist help with a mystery of his own...

Compared to last month, the story has settled down a good bit, and it's more cohesive in dealing with the time periods. Mainly, the jumps are more distinct. Instead of having different time periods on the Lost Light itself as well as shifting to the trial, all the Lost Light action takes place in the present, which also frees up the space to spread out a little and show more of life on the ship under the Megatron Administration, as well as see more how some of our newcomers like Nautica and Nightbeat are getting on in their new surroundings. The mystery started last issue continues, and grows, quite literally. As for which mystery I'm referring to, I can't even say because I'm not sure how many different mysterious things are happening at once! The trial flashbacks have at least as much story action going on as what's happening presently on the ship, but the highlight for that by far is Starscream's testimony. It's a beautiful chunk of character writing, and almost makes me regret that some way or another Starscream didn't become a regular in MTMTE so we could get Roberts dialogue on him all the time.

It's funny that last issue's review found me talking so highly of how the book's coloring under Josh Burcham was so important to the book's identity, as I found out a short time after publication that 28 would be Burcham's last issue on interiors. Starting this month the book's colors are provided by the talented Joana Lafuente. There is some visual shift. With different styles and methods, the art looks clearly different between the two colorists. Most notable to me is the increased warmth within the ship thanks to the more vibrant colors now used. I have chosen to reconcile this for myself as Megatron having ordered all the fluorescent lighting aboard ship to be replaced with soft incandescents. That monster, he has no concern for energy efficiency! That particular shift was the cause of some concern with the initial preview pages a couple weeks ago, but Joana is a very good colorist and the book is in good hands. The change in color style is not jarring at all in the end, and Joana makes Alex Milne's art pop in ways different than what we're used to, so it's fun to see how the same familiar art style can be given a new feel this way.

While more attention this month may be drawn to the way the colors finish it, Alex Milne's linework is as solid as ever. Some stand out portions include a great panel of Trailcutter engaging a force field (no, seriously), a neat detail shot of the ship's exterior with some cut aways at a scale we don't typically have the opportunity to be treated to, and a really nicely composed panel featuring Nightbeat and Chromedome around halfway through the issue. Trust me, you'll know that one when you get to it. I'm also gonna go on record and submit that Alex Milne may be the only artists so far that does not draw Rattrap's face looking incredibly, unsettlingly creepy in the attempt at adapting the odd contours and features of the toy and old CG model. That ordinarily might not be cause for special recognition, but when it seems like an impossibility for anybody to really capture the look of Rattrap, it's important when we find somebody that really can.

Can we maybe have more Starscream appearances in the book some way so that not only can we get Roberts writing him here and there, but also to have chances for Milne to draw Rattrap's face?