The Windblade miniseries continues, as Windblade and Chromia set out to learn what Starscream wants kept secret badly enough to try to have her killed. Written by Mairghread Scott, Art by Sarah Stone.

As Windblade recovers from her injuries, she's visited by Starscream, who makes a series of not-so-subtle suggestions of her good fortune in having survived, and how unlikely it is that she will live through the next one. Windblade is motivated even more by Starscream's words and resolves to discover the truth, both of Metroplex's malfunctions, how Starscream is involved, and why it matters enough to try to kill her to keep the secret. 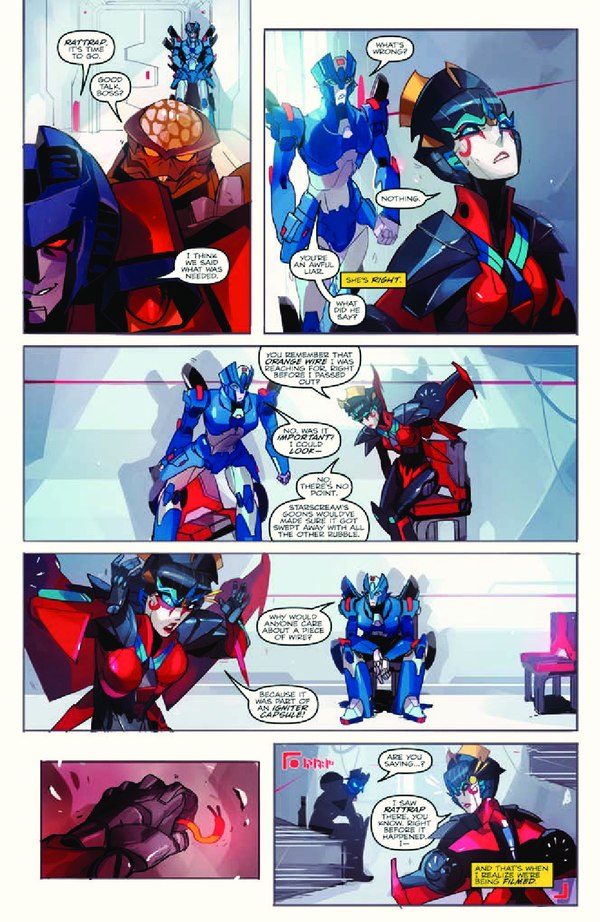 With the first issue setting up Windblade's place in the more-or-less familiar world of the Transformers, it feels like we're now taking off in to the true direction of the story. With a lot of internal monologue that suggests we're being presented with her point of view as Windblade recounts the story of these events to us, I can't help but think of classic detective story telling. Oh, if only Nightbeat weren't offworld right now, he would fit right in. But looking back to the first issue, the mystery theme of the overall story is very evident, and the issues form pretty solid "acts". Beginning with a seemingly innocuous problem to be worked out, and our hero narrowly avoiding being killed for digging too deep, and the next act picking up with the main character being spurred on by the attempt to reach even farther for answers in order to get personal justice as well as working out how it fits in to the original mystery. With this in mind, the feel of the story's pacing works better than it might seem to at first without going back and taking everything together. Since it's a planned-length miniseries, I won't say it's writing for the trade, but rather that it will likely be very satisfying once the story is complete to go back to the start and read all four issues back to back. The story arc seems pretty clearly evident now, which means that all we really have to do at this point is sit back and enjoy the back half of the ride to the endgame. Unless of course Mairghread Scott pulls out a surprise or two and turns the expectation on its head next issue!

The Windblade inner voice is interesting, for seeing just how far in to this character's head Scott has gone. She's showing that Windblade has a really strong sense of herself as an individual, even while struggling in how to adapt to the world and circumstances that she's been cast in to by her bond with Metroplex. Even when she knows she's getting in over her head her sense of duty and her ideals won't let her stop. It's an impressively deep degree of character identity for having only now two meaningful issues to the character's name. And she was already pretty far along just with the first issue! There's a good bit of Waspinator in this issue, and a good job is done to portray the character's emotional state and life outlook in just a small amount of dialogue. The hopelessness of an isolated individual who has been used and discarded repeatedly could easily seem shallow or even forced, but it reads incredibly naturally, even without having an existing knowledge of the character's background. The writing is still firing on all cylinders, with quirky, distinct characters that develop at least a little every time they speak, and a nice slow burn to the story that keeps you from seeing exactly what you're looking at until you're already inside it.

Sarah Stone's art continues to impress, though it's hard to not simply repeat the praise of last month. Facial expressions seem like they're going to be a constant highlight, and I suspect with each issue that passes I will grow more and more sad that the Windblade toy we will eventually get in Generations is not going to have a face anything like the one we're being presented in this art. Sarah Stone is very much defining the visual identity of this character, despite the toy design being completely pre-existing. It's never going to feel like the same Windblade without this face, that's how much impact her art is having. But Waspinator seems to be a recurring theme in this review, so we'll continue there since Sarah Stone manages to get a lot of expressiveness out of the buggy robot face. A few times it looks more like a wild take than a natural facial expression, but those are the perils when dealing with a face structure like that. Even so, she finds a way to make those shapes emote like you wouldn't expect to be possible. Panels with characters in motion still carry a strong sense of their movement - there's energy and weight and momentum even within a still image, and this applies to vehicular activity as well as situations in robot modes. Plus we get more nice environmental art. Locations in the bowels of Metroplex are rendered very nicely, and composition on a few parts in particular is handled extremely well with great light and shadow work. Windblade is still the prettiest Transformers title on shelves right now, fully thanks to the work of Sarah Stone.

I had wondered if the book would be able to live up to the really strong opening act the first issue laid out for it, and so far the answer seems to be a very solid YES. We don't end with quite the "bang" the first issue left us on, but instead we're promised one heck of a time starting next issue. And if it goes the way it's looking like, I think we'll get to see Sarah Stone really pull out the stops with the art. Meanwhile even if the book follows the mystery line it seems to be, that's a very fertile field for Mairghread Scott to work within, and I'm eager to see where she takes it next!