Meet Marissa Faireborn: former protester, current anti-Cybertronian strikeforce commander. So desperate to strike back against the Autobots for harboring Megatron that she'd make a deal with the devil. Or at least Galvatron, which is possibly worse. "Earthfall Part 2: Detonation Boulevard" is written by John Barber with art by Andrew Griffith with flashbacks by Guido Guidi and Brendan Cahill. Colors by Josh Perez and Joana Lafuente. 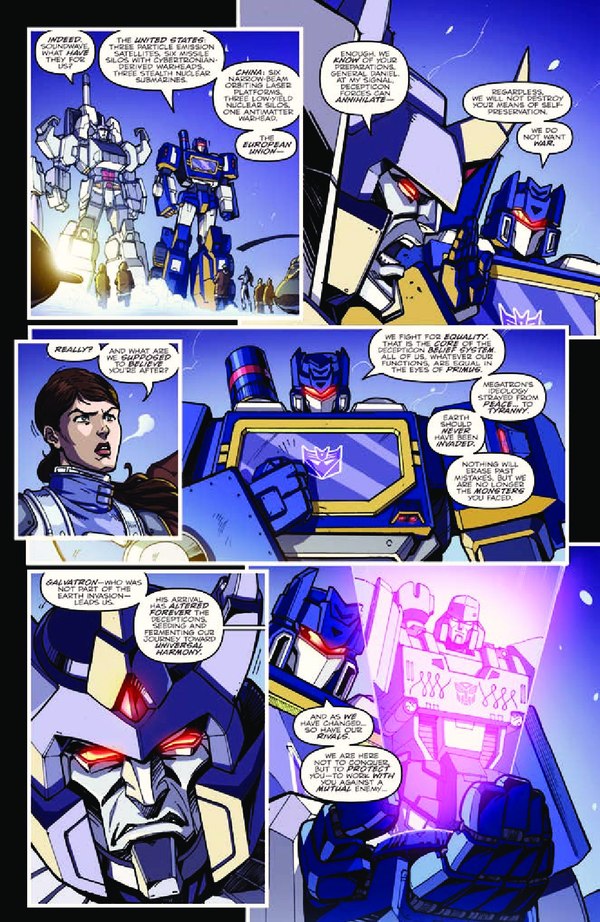 In the initial meeting with Soundwave and Galvatron, Marissa Faireborn recounts her youth. Due to a failed attempt to rescue Third Party Donald Trump from the events of All Hail Megatron, she rose from peaceful protester to the upper ranks of the Earth Defense Command. Despite Galvatron threatening to annihilate the human race at least twice during their conversation, she chooses to believe that the Decepticons are now a force for peace and the Autobots are the enemy. In the present, Optimus Prime engages the Decepticons and radios Prowl for help. Prowl's not there, but Jetfire and his little buddy D.O.C. are contending with the human-made microbots devouring Ark-7. They're aided by Prowl's team, whose identity will not surprise you much if you've been following RID. But why is Prowl himself not responding?

Because Prowl has a plan, of course.

Impossibly, Soundwave sells Faireborn and the EDC on the idea that the army that devastated Earth is now working for peace because their murderous tyrant of a leader has departed... while their new leader threatens to destroy them. To her face. Maybe she thinks the EDC will have a better footing against the Decepticons once they've weakened themselves destroying or repelling the Autobots, but that's not what we get here. From all we can see here, Marissa Faireborn comes off as short-sighted and, frankly, kinda stupid. Which is reinforced by an "I told you so" from Thundercracker later in the issue. So there's got to be more to this story I hope- but taken on its own, it's coming off as contrived.

The rest of the story is good, though still paced a little slow as the issue is mainly comprised of a battle interspersed with a couple of flashbacks. In the middle of the struggles on Earth with the Decepticons and Ark-7's struggles against Earth's defenses, there's a flashback to the end of Megatron's trial (not giving the ending away except that Megatron is not sentenced to death, which we already know). It does explain why Prowl decided to come along to Earth at least- and for the first time in a long time, I sympathize with him. I think everyone feels like the person who ends up fixing everything for everybody sometimes. His plan for dealing with this attack, as I'm interpreting it, is really clever- in the short term. It could backfire on either side, but Prowl being Prowl we'll have to assume he's got that under control.

Also, as a footnote: All Hail Megatron's Decepticon assault on New York is now shown as taking place during Occupy Wall Street. That series of protests occurred in 2011, two to three years after AHM was published. It seems as though Barber's flirting with a sliding time scale here, which is how Marvel comics deals with its never-resetting continuity. Probably a good idea!

I'm still very happy to have Andrew Griffith back, as he keeps the fight scenes clear and understandable, and of course looking great. With humans and Cybertronians of all shapes and sizes coming into play his ability to convey scale is put to excellent effect once again. The one thing that finally became clear to me in this issue though is that I'm not a fan of how he draws womens' faces; a lot of the odd stylistic choices in Arcee's face over the last couple years are also present in Marissa Faireborn's. It was Guido Guidi's rendering of the negotiation flashbacks that made it clear for me, where Faireborn is clearly a stern and authoritative woman but she doesn't look creepy. As always, Guido's a treat to have on, though it may be that his super-expressive hate-filled Galvatron (seen above) is part of what makes the negotiations come off as wrong. Good face, possibly not what's best for the scene. Brendan Cahill guests as well on the Cybertron flashbacks, and his slightly more expressive Prowl fits the scene very well since Prowl is not in a great mood. Cahill's Angry Prowl face is right on the verge of Andrew Wildman style but pulls back from the roundness and proliferation of round metal cheekbones that I never liked about Wildman. This is possibly one of the best combinations of three artists I've ever seen on an IDW book, as the three styles complement one another very well. The comparable levels of detail and styles of (robot) faces make it all gel very well while still giving everyone room to shine.

The Earth-Decepticon Alliance is looking a little forced at this point, but we don't have all the information yet. That's true in general: we're just starting to fill in the shapes that the conflict on Earth will ultimately take. A lot of it looks interesting, especially if Prowl's strategy shakes out the way I'm thinking. And so far Prowl is definitely the highlight of the book, love him or hate him. I said last month that he's becoming John Barber's trademark character in much the same way that Grimlock was Simon Furman's, and this issue reinforces that. In the end we're still not hitting the highs of Robot Politics, but it's a good comic that is hopefully building to better comics.