Length: 6cm each without accessories.

First up, I reviewed the Hexbug Nano line, and you can see that review by clicking here. Then I followed up with the Hexbug Warriors Battle Arena, which is here. To finish up we have the review of the Hexbug Warriors Battle Stadium playset. This is the biggest thing in the line - I mistyped that as "buggest" at first, which I suppose also works - and features the Optimus Prime and Lockdown Warriors along with a bunch of extra accessories. If you plan on having a lot of Warriors, this is a great thing to have around. 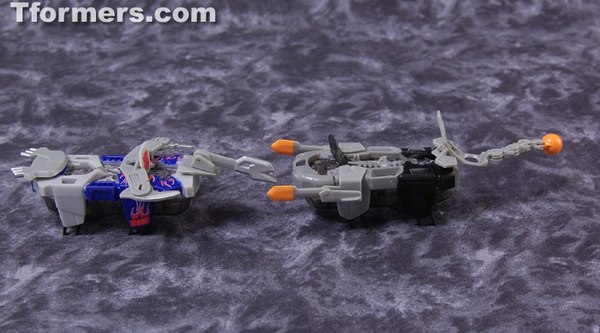 As with the other Warriors, Optimus and Lockdown have designs which are evocative of their humanoid robot bodies, but not direct copies of anything. Optimus Prime has vents very much like the character model's helmet (both on the molded armor and on the "inner workings" underlay) and also this time the flames from his movie vehicle mode, which are a nice touch. Lockdown seems consistent with what we've seen of his character so far as well, and the front end of his bug form is very smooth and streamlined; he's not specifically shaped like a Lamborghini but the shape is very sportscar-like. And in case you can't tell which faction either should belong to from a distance, you can flip up a small panel on the front of each Warrior to show their faction symbol.

Each comes equipped with what I presume to be their own signature weapon/armor sets. Optimus is patterned after a beetle of some sort- let's say Rhinoceros Beetle and see if somebody who knows more about entomology corrects me! His main horn is a Motion Weapon and thus has a lot of play to allow it to vibrate as he moves. His side horns are Advantage Weapons, meant to be adjustable. His rear armor plate has smokestacks, which is fun. Where Prime is a beetle, Lockdown is clearly a scorpion. His Motion Weapon attaches to the back rather than the front, and is a long, jangly tail that ends in a big orange ball. A flail-tail. His Advantage Weapons are small "blades" that unfold- not sure how much of an advantage they'd provide folded up or even raised a bit, but it's an option.

The set also comes with four sets of bonus weapons. You get Bumblebee and Galvatron's gear, which I covered in the Arena review, but also Crosshairs and Drift's. Crosshairs' Motion Weapon is an odd little thing, a small arrow or spike held in a loose bracket that's on an articulated mount so it can move around freely. Very Robot Wars-feeling. His Advantage weapons are armor plates mounted on a couple of different joints, so they can be positioned in a bunch of different ways. Drift is another beetle design, but his horns work differently. His main horn spins, and his side horns are geared together to be adjustable. It's a good variety, and if you wanted all this gear otherwise you'd have to spend the $40 for the other 4 Hexbug Warriors anyway, so it definitely helps add value to the set. 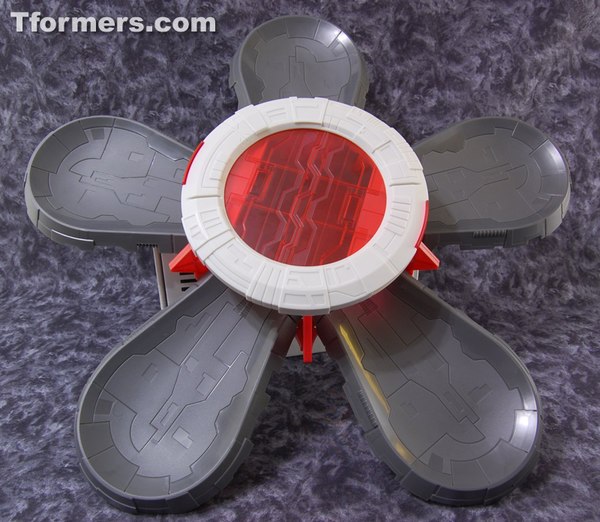 Of course the centerpiece of the set is the Stadium. You assemble it yourself, which'll only run you about 5-10 minutes if you clear off enough table space to set it down. It's made of plates similar to those of the smaller Arena, but you get five instead of only two. In addition there's a ring you attach to the top that's reminiscent of Armada Unicron's maw. You can use it to drop your Warriors down into the Stadium or keep closed for a more compact ring for two Hexbugs. (They'll eventually force it open, which is a good dramatic touch.) The Stadium floor is nice and big and provides plenty of space for your Hexbugs to move around in, and looks like nothing so much as a cyborg daisy. It's solid enough for Hexbugs once you've got it put together, but not so solid that you can't pull it apart and set it aside for storage. I'd also pick it up by the center and at least one "petal," as it may well pop apart otherwise. 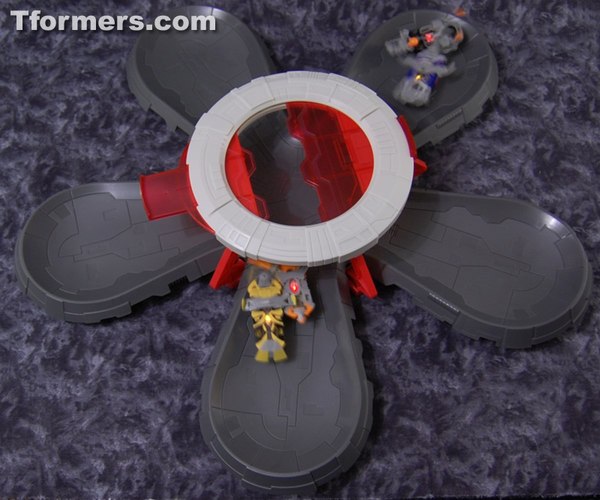 In the first test battle I ran, Optimus Prime beat Lockdown- so if you're betting money on how Age of Extinction comes out, there is my advice based on an objective Hexbug test and not narrative convention in any way at all. When I tested it with all four Warriors in my possession good uniformly triumphed over evil, primarily because the Decepticons were fighting amongst themselves, so again: simulations have been run. It's worth noting that if all four bugs get bunched up on one of the five platforms, it is possible that one of them may get shoved out of bounds, so be careful they don't run away on you.

Overall I think the best thing to start out with, out of all the things I've reviewed, is the Battle Arena. It's a complete game in and of itself, costing the same as two individual Hexbug Warriors. But if your kids loved that and want more, the Battle Stadium is a good idea. It has more than enough room for more than two Warriors at a time, and the extra parts for customizing your Warriors (or replacing lost parts for your Bumblebee, Galvatron, Drift, or Crosshairs) will surely come in handy. It's a great set and provides decent value for the cost, but make sure that you or your kids are sold on the concept of Hexbug Warriors before you go spending the $40. 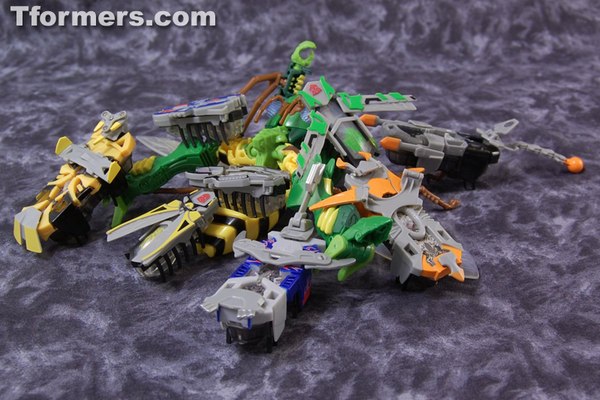