Field-trip to Delphi! A mysterious virus sweeps the medical facility, causing Autobots to cry their guts out. What is Red Rust and what causes it- and how can Ratchet help the Delphi medical team stop it? "Life After The Big Bang" is written by James Roberts with art by Alex Milne and colors by Josh Burcham. Built for the motion comic format by Tomas Sisternos with setups and separation by Sean Worsham. 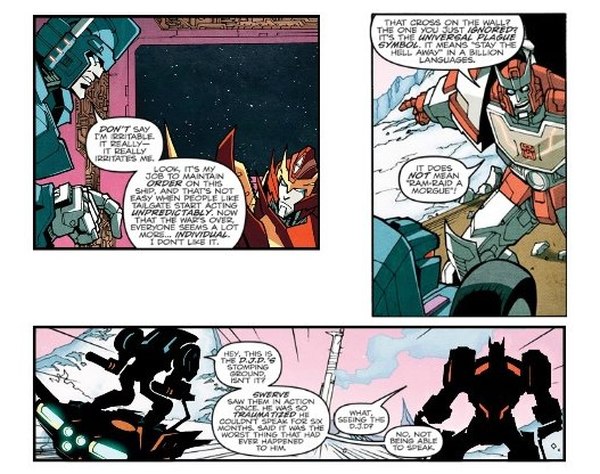 I don't even know what to say, except: this comic is great.

First Aid sits down with a datapad and recounts the beginnings of the outbreak of a strange disease at the Delphi Medical Facility. On the Lost Light, Ratchet and Swerve are beamed a set of curious medical records and patient death rates that indicate it's high time for a visit to Delphi. While Ratchet, Drift and Pipes head down and investigate, temporarily aspiring Decepticon Tailgate is given a crash course on what that affiliation actually means. Predictably he's not too thrilled.

The Delphi story is the earliest MTMTE story I'm actually familiar with, and it's a great one. It's a mystery story with Ratchet as the star, and deals with both Ratchet's need to save lives and his impending sense of hopelessness at his deteriorating, irreplaceable surgeon's hands. Every piece of dialogue in this book is not just an opportunity to learn about the world but also the characters. Nothing is wasted, nothing is filler, every word is there for a reason. Relationships between characters are built and explored here, most notably between Ratchet and Drift and, on a darker note, Cyclonus and Tailgate. Roberts has said that he wanted a contrast in the series between "hot" and "cold" violence. The purely emotional Whirl provides the series' hot violence, but Cyclonus is in many ways worse, as the detachment from what he does makes him both more unpredictable and more frightening.

The Domestic Violence scene is, in fact, one of the better uses of the motion comic technology in the book. Another good use is a few pages previous where Ratchet, First Aid and company enter a room filled with patients, and the "camera" pulls back to expose the full scene. Sound is used sparingly this time, primarily for transformation and for Pipes ramming open the door to Delphi. But it's really not needed, and the motion effects do the job just fine on their own. Once again, More Than Meets The Eye is the best motion comic I've read, and I suspect that that's due to a convergence of talent at every level: Roberts writes a cinematic script, Alex Milne draws clear and detailed art that can benefit from being presented in carefully-selected slices, and Tomas Sisternos is exceptionally good at doing the slicing. I will repeat my concern, however, that the text is a bit small for some platforms. My default method for reading was on a 19" 720p monitor, and I have to go fullscreen to make out the dialogue. If there's any way to bring up the size of that -even by the tiniest amount- without disrupting the art then I feel it should be done.

Again, this is the best Transformers comic series to date, and the motion comic format does enhance things considerably. If you love MTMTE it's worth a look to see how the presentation affects things, and if you've never read it before and your primary reading device is a tablet, then this is a great choice. On a PC, you might do better going for the regular version.