Galvatron's past as a warlord who united ancient Cybertron is revealed as Prowl makes a calculated mess of things, and everybody plans their next move. "Earthfall Part 3: The Mind Bomb" is written by John Barber with art by Andrew Griffith with flashbacks by Casey W. Coller and Brendan Cahill. Colors by Josh Perez and Joana Lafuente. 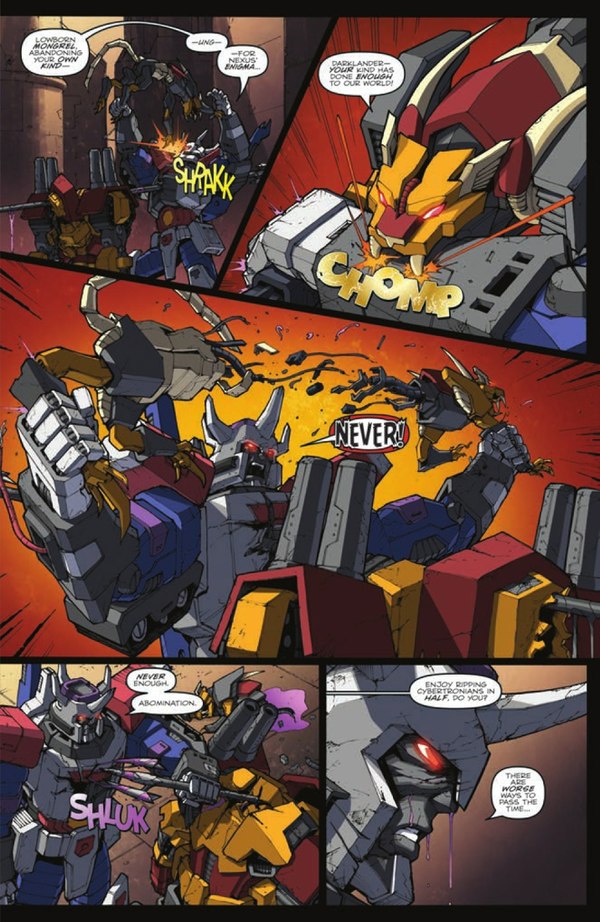 Do not pursue Lu BuGalvatron!

Ten million years ago on Ancient Cybertron, a wounded and isolated Galvatron kills a pair of attackers from a rival faction. He is approached by a young(er) Alpha Trion, and offered "peace, conquest... and the world itself." Four months ago, Soundwave explains his plan while Galvatron throws yet another fit. Currently, Prowlastator blows everyone's cover, much to the dismay of Marissa Faireborn. The battle continues until she decides things have gone too far, and she stops it with a new weapon...

Prowl's plan is smart, but not was I was expecting. Since last issue made it a point to show Devastator demolishing New York with the rest of the Decepticons, I was hoping that he would use that in some way to tank the EDC/Decepticon alliance. But no, he's making an appearance to throw a monkeywrench into the EDC's attempts to keep the Decepticons' presence a secret. While that does make plenty sense- I'm sure they don't want it to be known that they're collaborating with the army that melted New York -it's a little less grandiose and elaborate than what I was hoping. This road also leads us along the "government coverup" path, which -again, while making sense -isn't exactly new ground even for Transformers. Nothing here is badly done -though Faireborn, gets another "I told you so" in this book and despite having a backup plan still comes off as very foolish -but it's just not as groundbreaking as Robot Politics.

The flashback to Ancient Cybertron is the highlight of the book. I'd love to read a story about the first Cybertronian Civil War. Galvatron hasn't changed much in ten million years. He's reminding me of the general Lu Bu from Romance of the Three Kingdoms (better known in the US as part of the Dynasty Warriors series): incredibly strong as a warrior, and able to lead through force of will - but dismissive to the point of contempt of any need for strategy. It's Soundwave's job to keep him on a leash as his plan unfolds, and at this point the book almost looks as though it's more a battle of wits between Soundwave and Prowl. And if we go there more overtly, I'll be pretty happy.

ExVee and I keep singing Andrew Griffith's praises for his ability to convey scale, but the first splash in the present day is a textbook example of how to do it: Prowlastator looming large, dwarfing the Autobots (and mountains!) behind him and Galvatron in front of him... and the humans and general store in the foreground to show how tiny they all are compared to even Galvatron. Griffith's strengths are very much on display in this book, along with his few weaknesses, one of those being Faireborn. Arcee still looks a little odd these days but he's settled in on drawing her. I imagine that'll be true of Fairborne too as time goes on, but for now she still looks odd.

We once again have two guest artists on the book, and both do excellent work. Casey W. Coller draws the Galvatron flashback, including the meeting with Alpha Trion. I get a kind of Derek Yaniger vibe from a couple shots of Galvatron, and I'd bet anything that's intentional. We're looking at a violent and gritty episode from Cybertron's past after all (as opposed to the rest of Cybertron's past...?) Brendan Cahill returns for another six-months-ago-on-Cybertron flashback, and does a great job with it. The flashback begins by shifting from a Griffith closeup on Arcee to a Cahill closeup, and ends on Prowl closeups going from Cahill back to Griffith. Neither tries to match the other's style exactly of course but they're similar enough that it's not jarring, and in fact it's fascinating to see them draw basically the same panel back to back. This even though there's no hiding that you're looking at the work of two different artists (Cahill does an ever-so-slightly better job drawing Arcee's face). Once again, all three work in similar styles, so it's not as jarring as some of the hyperdetailed to detailed to underdetailed transitions we saw in Dark Cybertron.

Robots in Disguise's contribution to Dawn Of The Autobots has been a little bit drawn-out in that Marvel/DC way so far. I could see Simon Furman doing all of this in one issue 25 years ago (excluding the flashbacks). That might be a little too short to give all the characters here time to breathe- but I'm still of the opinion that three issues is too long for setup. ExVee and I have said in our comic segments for Radio Free Cybertron that both this book and MTMTE would've been better served by making Megatron's trial and the post-Dark wrapup on Cybertron a separate special - "The Death of Megatron" as a bookend to the "The Death of Optimus Prime" that kicked off the current era at IDW would've been perfect. As it is, both books are still struggling a bit under the weight of Dark Cybertron's continuity, and with its change of venue RID already has something to prove. At the end of the book we're pointed towards the next part of the story, and that's looking interesting. Maybe once the hunt for Alpha Trion gets going, we'll see some improvements.