They opened the coffin. And what was inside makes no sense... yet. But before all of that, all of this, there's The Question: what was the outcome of Megatron's trial, and how did the greatest war criminal in Cybertronian history end up in a position of command on the Lost Light? "World, Shut Your Mouth Part 3: Predestination - A Beginner's Guide" is written James Roberts with art by Alex Milne. Colors by Joana Lafuente. 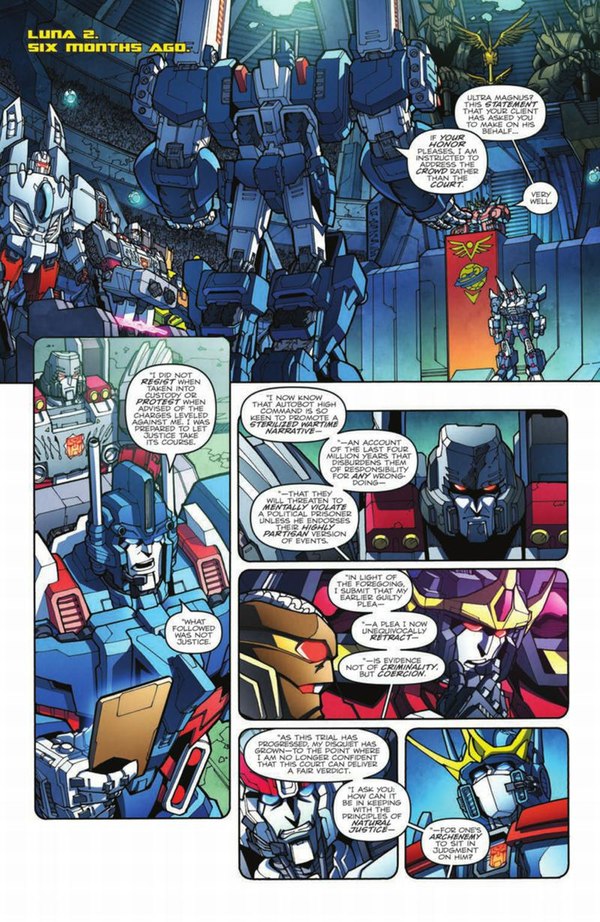 Look at Starscream and Prowl both freaking out! Love it.

Megatron explains his change of plea, and is about to elaborate when a group of Decepticons storm the courtroom to mount a rescue- a rescue he rejects. In the present day on the Lost Light, First Aid examines the contents of The Coffin, and the crew prepares to break the news to Rodimus that he seems to be dead. And as Rodimus and Megatron bicker, with input from the crew over what it all means, the section of the ship behind Rodimus vanishes...

Let's begin with the news I know you've all been waiting for:

The Rodpod is back. Rejoice!

Beyond that, the remaining comic is just completely excellent. We're back to prime MTMTE: every piece of dialogue that can communicate both information about a character and a situation, does. There's some truly great exchanges between Rodimus and Megatron, as well as Rodimus and Ratchet, Nautica and Brainstorm... there's too many to list. The bulk of the story advancement in this issue is filling us in on the specifics of Megatron's trial and why he's on the Lost Light. It wraps up that question definitively and the explanation makes perfect sense and in no way seems like an anticlimax. The present-day story advances by what would otherwise seem like inches- but again, the dialogue. James Roberts writing interesting people being interesting people. He could write these characters filling out their taxes and I'd want to read it.

The keyword for Alex Milne's art this issue is "crowd scene." Panel after panel of massive groups, fight scenes, and all kinds of time-consuming elaborate work. It looks great! And of course the expressions that drive Roberts' script- as always just exaggerated enough without ever looking too organic. And I'm getting used to Joana Lafuente's style on the book- it's technically excellent, but still much more saturated in comparison to Josh Burcham, as ExVee has pointed out. Bits of it- especially the trial - are seeming to head towards less saturated colors, but if the book remains looking like this I'm more than fine with it. It's a new era for the Lost Light, so it may as well feel a little different. Also worth calling out: there's a panel near the end that is almost entirely a cold blue, standing out from the books otherwise warmer palette. It fits the mood of the scene perfectly, and enhances another fascinating character moment.

This review may seem rather short, but it's easier to run long when you have issues with the issue, or specific things you feel need explained or criticized in detail. A book that's all around good, that you're trying not to spoil, and has nothing that invites itself to spoiler-free heavy analysis? That can only run so long. That's right, I have nothing to complain about with this book. I'm even cool with the limited My Little Pony DJ Pon-3 vs. Soundwave cover. But what it comes down to is this: this is the first issue of MTMTE post-Dark Cybertron that fully hits the level of the best pre-Dark Cybertron issues. And the first issue that I think ties Windblade for best comic of the month. More Than Meets The Eye is back, and it continues to be a great time to be reading Transformers comics.