A battle in the depths of Metroplex leads Windblade to discover that the enemy she knows may not be the greatest danger to her, or to Metroplex. Written by Mairghread Scott, with art by Sarah Stone.

Windblade's team is confronted by the Terrorcons within Metroplex. The Terrorcons are intent on destroying the intruders, but Windblade and the others manage to gain the upper hand. The victory is cut short by the arrival of Starscream, who places Windblade and her supporters under arrest for crimes against Cybertron. However, while the truth of Starscream's actions against Metroplex may never become known, Windblade learns that the threat to Metroplex and herself may not be entirely what she believed. 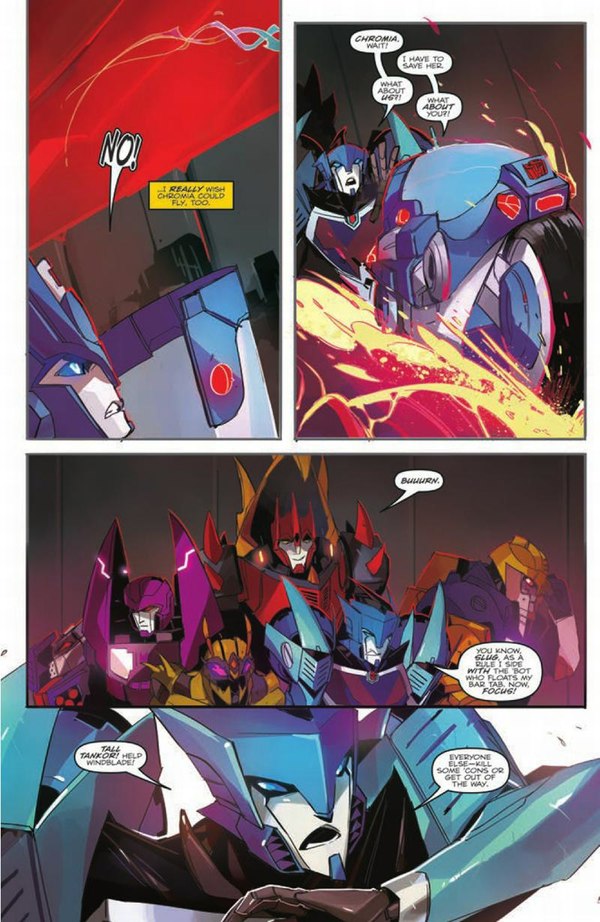 While we do get the next installments of Windblade's own story, something that caught me a little more in this was the bit of world-building going on. Starscream explains how he's assembled a police force to deal with the problem of criminal activity in a post-war world. Police who are concealed behind masks for anonymity, and who it's explained to us are/will be referred to as the "Badgeless", making them further removed from any individualism and connection to the regular people. They're Starscream's enforcers, and while we don't get any good look at them besides to see that the ones present this issue are flight-type, it's brought across so clearly in so few words just what they are and what they're about that you understand with nothing I would call outright exposition.

As far as the actual storyline, it's following most of the beat you'd probably expect. The twist towards the end could honestly have gone in either direction and been fine. The shift now is still typical of the formula of this kind of story, but it's not really a knock against it when being done by a very capable writer like this. It's less about the story being told as it is how the characters are being utilized in telling that story. It's the strong point, because all of the characters have their distinct voices, and that's kept consistently as the situations change around them. A line like "Even Wazzpinator not dumb enough to say that" is so natural to the character - at least the basis of the character back in Beast Wars - and fits the scene perfectly. What's so great and what I'm able to recognize more and more as we move along is that Mairghread is writing everyone in the voices and personalities of each character, unlike many otherwise strong writers who can turn dialogue really well but everyone still ends up speaking in mostly one voice: the writer's own. Like I said, the story may not be exactly innovative, we're just mapping a standard style of story to a Cybertronian setting, but it's populated with these great characters that make it special. And we get nice background items like the Badgeless that help to keep the world in development.

This issue had an extended fight sequence, and that was the one part where the art didn't win me over this time. The character motion like chases in alternate modes worked great, and there's more than a few examples of that to be had. It got a little weaker where it came to where two or more characters were directly interacting in combat and it started to be difficult to work out exactly what the action and movement was intended to be. It was far from the least readable fight I've ever seen even within the last couple years of IDW output, and may only stand out just because the rest of the art is so strong and well realized. Sarah Stone's strengths continue to carry through as ever. The characters are all very expressive, with clear body language and facial expressions. I love some of the particular panel compositions in this issue, and the way lighting is used is really excellent, as I've come to expect with her art. I really regret that next month's issue may be the last we see of Sarah on interiors for a while, but at least we know now that a second Windblade series is planned for next year and we should be getting more full issues in this great style!

It's a little sad that this miniseries is almost done with, but I'm excited to see where the final issue takes us and what big reveal we might be left with by the end. And with the promise of more of this character's story from the same creative team, it doesn't feel as final as it would have a few days ago.