The Transformers: More Than Meets The Eye #31 - Generation One - IDW Comic Book

18 or 19 Autobots and an unaffiliated Cybertronian locked in a small space ship. Sounds like a disaster waiting to happen, and that's even before random disappearances begin, causing panic and bringing everyone to the breaking point in "Twenty Plus One", More Than Meets The Eye 31. Written by James Roberts, with art by Atilio Rojo, and colors by Joana Lafuente. 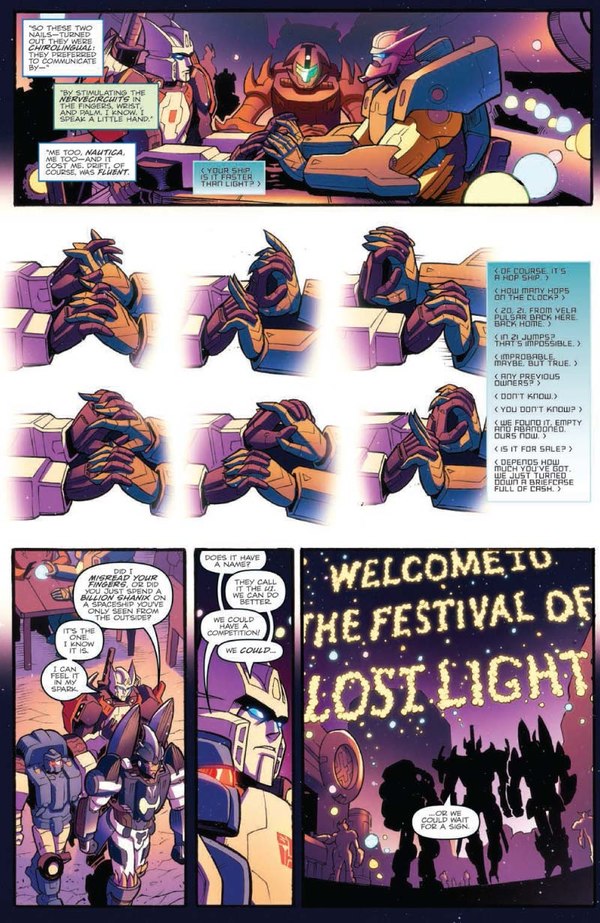 Talking with your hands.

With the Lost Light having completely vanished, the crew is scattered among whatever secondary spacecraft were available to evacuate in to. The Rod Pod Mk.II plays host to some of the refugees, including Megatron. The general feeling of unease with the former Decepticon quickly escalates as individuals begin vanishing from within the ship with no apparent cause. Nightbeat resolves to use all of his skills to determine the pattern before there's not anyone left to help.

The life boat story is played in More Than Meets The Eye flavor this issue. Instead of an overall mutual antagonism among the whole crew, Megatron is almost the sole focus for the tension. It works, and allows some of those ideas to be played out to a degree even with a several-months time skip in place that would otherwise make open dissent feel unnaturally late. This is balanced against trying to work out the successive disappearances of the small crew on the Rod Pod Mk.II, which is used additionally to reveal little bits of detail about characters in trying to figure out common points to explain why particular individuals are vanishing before or instead of others. This gives us a good time to see Nightbeat not only play detective, but also run up against a wall of frustration as more and more conclusions are proven false. Riptide and Nautica get particular focus among the new faces on the crew, taking advantage of the situation to get some solid development in on them. All of our regulars act about how you would predict as the situation builds, including Tailgate buying in a bit too much to the hype others have been piling on him from his part in defeating Tyrest. And Megatron may have more to his current motivations than he's letting on, which is not itself likely to surprise anyone. The vague nature of the revelation is handled well so it could lead in any of a number of directions from here. And so we have the persisting highlight of James Roberts' writing, where the mix of ongoing plot and entertaining character moments is balanced just so that neither takes a back seat to the other, and both tracks of storytelling share equal importance with each other. Locking a selection of your cast in a small space together and seeing what happens is a great device to show off characters, and it's blended really well with getting us to the start of the first real story arc under the Megatron administration.

Art duties this month fell to Atilio Rojo. And I have to admit, the art on display here looks notably better than his parts of Dark Cybertron. The flashback sequence at the start of the issue actually works really well being rendered in his style in particular. Adherence to character models is good, but of course Rojo's less detailed style is quite distinct from Milne. I'd like to think what made the difference was having more time to focus on doing one issue in isolation rather than contributing to two issues per month for an extended period, so everything could be a little more solid. Since 31 was solicited with Alex Milne on primary art, it was unexpected to find this art in the actual issue, but my initial concerns were quickly put aside, and while Rojo would not be my first choice for a substitute artist, the issue got by just fine. Joana Lafuente's colors compliment well, being nice and vibrant and feeling at home in what I always felt like was a cartoon-style approach in Rojo's art. I couldn't really imagine Josh Burcham coloring these lines and it not feeling very awkward, so I think we've got an all's well that ends well on the art side of things this month.

And could it be, is it true? Yes, I think this may be the return of Toywatch! ...which might also explain the use of Rojo on art if this issue had to be bumped forward on the schedule to meet toy production deadlines. Nightbeat figures pretty heavily in the story of this issue, making it appropriate that going by the excuse me, 30th Anniversary Cover by Phil Jimenez, colored by Romulo Fajardo, Jr. depicts Generations Nightbeat who will most certainly come with a copy of this issue.

...too bad it's the wrong Generations Nightbeat. This is the Jazz-bodied Nightbeat seen in an old solicitation for an assortment including Jhiaxus and Windblade. The toy that is actually happening is made from the Generations IDW Bumblebee mold. That certainly makes it look like the switch happened pretty late in the game since apparently they didn't have the time to get new cover art done. The upside is that while the cover shows the entirely wrong (and non-existent) toy, the toy the comic will be packed with is a considerably better match to the design being used in the story.