Robot Politics/Autobot With A Vision/A Poet Comes Home. "A Better Tomorrow" is written by John Barber with art by Andrew Griffith and Casey Coller, colors by Josh Perez. Built for the motion comic format by Jan Michael Amistad, Mark Simmons, and Matt Harding. 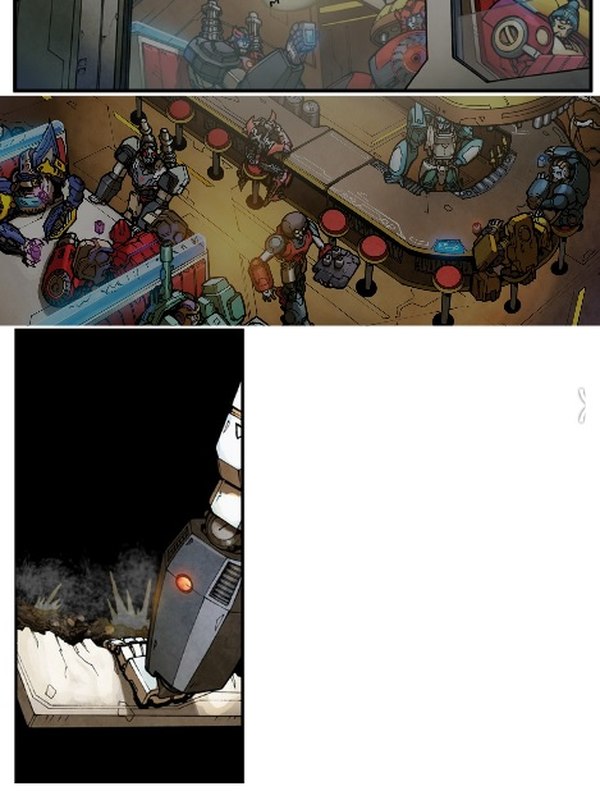 That's how you can tell Prowl's not himself: inability to flip tables.

A day in the life of postwar Cybertron is seen through the eyes of Ironhide, dealing chiefly with the arrival of a new NAIL, and one he has history with: the ex-Decepticon Sky-Byte. When the warrior-turned poet is apprised of the situation on Cybertron, he's not pleased by many things, least of which are the detonating I/D chips Decepticons are forced to wear by the Autobot-led government. Then he gets wrapped up in Swindle and Needlenose's attempts to help Dirge evade Prowl's manhunt, and things get even worse. Bumblebee, Metalhawk, Starscream, and Ironhide speed towards the scene as a riot breaks out...

It's difficult to talk about this book alone knowing what I know now, because in many ways (some of which won't be apparent for many issues to come) this book informs the current situation on Cybertron and in IDW's world in general. This issue was the first attempt to try and integrate the "Good End" from The Transformers #31 into the rest of continuity. It's still in the maybe pile though, as things have changed significantly since this issue, and Ironhide is no longer confident in his visions. But his appeal to the future at the end of the book represents a direction that might've allowed the Autobots to retain control of the planet. If only it weren't for Prowl, mind-controlled or otherwise. Speaking of which, this is our first full issue of a Bombshell-controlled Prowl as well - and yeah, you can't tell. At all. Which current-day Prowl still hasn't taken as a cue for any real kind of self-examination of course. Last but not least - which is odd to say since this event is the catalyst for everything else occurring this issue - we're introduced to IDW Sky-Byte, one of the earliest non-G1 additions to the all-inclusive continuity IDW has built. He's a fair bit less goofy than his counterpart from the other Robots In Disguise. (Well, one of the other RIDs as of early next year...) He still turns up from time to time, most recently appearing in an issue of Windblade's miniseries.

The art in this issue is by both Andrew Griffith and Casey Coller, and to both their credit I'm having a very difficult time determining how labor was divided. Did Coller draw some pages and Griffith others? Pencils and inks? There are spots where I'm pretty sure I've definitively identified Griffith by how he drawls Prowl, but beyond that I'm not sure. Their work meshes very well in terms of style and level of detail. If the book needs a fill-in artist in the future, Coller would be a great choice. The motion comic build features a new team, that of Jan Michael Amistad, Mark Simmons, and Matt Harding- and it's a much more lively production this time. Transitions from panel-to-panel and from zoom-to-zoom are more interesting than we've gotten for RID so far, and there's more sound and motion in general. Particularly nice is a panel near the end of a table refusing to allow Prowl to flip it. There is one panel where Sideswipe is hitting Needlenose with the butt of his rifle where the motion seems a bit odd, but otherwise the effects are used judiciously and are much closer to the quality and inventiveness of the transitions and effects shown in More Than Meets The Eye's motion comic conversions.

As RID hits its stride as a comic, the motion comic version is also hitting its stride. The new team is doing a fine job, and hopefully we'll continue to have IDW's two best comics shining in their new format. I do have a soft spot for the static comic format, but this version definitely adds something to the original presentation. This is the first issue of RID that I feel does enough to justify its price- more than a static comic download, but still less than a physical copy. In short:

Like `Bot Politics
But not sold on motion books?
Then try this issue.